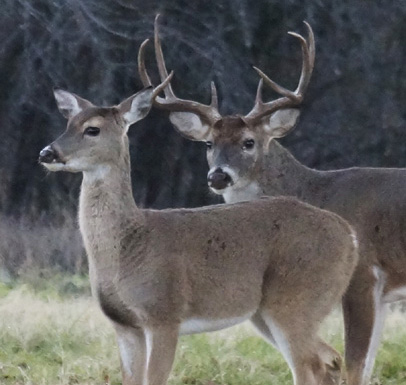 In my early teens I joined the Orlando Bowmen and could not thank enough the men from the club that took me and my buddies Tommy Denson and Hugh Carroll bowhunting deer with them for the first, and many more, times. They sure opened my eyes to something that became my life long, heartfelt passion.

I doted on those mens every word as they freely gave their advice to us. I didn’t know anything. And to me, they knew it all.

And as the years passed I met lots of deerhunters who also had plenty of advice and information. All the while, I saw things happening in the deer woods that were different than I’d heard about. And, noticing that, I started playing off what I saw and learned, more often than what I’d been told or read.

In the mid 80’s I figured I had put things together pretty good and was a knowledgeable deer hunter (that hunted exclusively with my bow and arrow). Then, in 1987 I made a casual decision that turned out to be pivotal for what I knew about deer and deerhunting with a bow. I bowhunted for the next 3 years for all of October, November and December. Every day.

I learned a lot about deer and their behavior, but the thing that struck me most was that much of the information hunters had shared with me, to help me out, was kind of like “old wives tales” sort of things. Their info was was  either incorrect or else incomplete snap-shots of a particular deer activity. And, also, so was what I had believed before hunting the first entire eason.

Nobody had tried to mislead me. I want you to know that, every single person was being helpful and I totally appreciated it. That said, one common thread stretched through their deer and bowhunting info. They were weekend hunters and sometimes they hunted for several days of their vacation time. Their information came from other hunters … and their own totally random experiences. So had mine.

Now to sum this up short and sweet, after hunting deer every day for 3 months, I was reading out of a very different book of deer  knowledge. And what I’m gonna talk about today is my discovery of the 2nd rut and what I’ve learned about it.

What Is The 2nd Rut?

Every deerhunter knows about the “whitetail Peak Rut”. Depending on how far north or south you live can be in November or December and in far south Texas it’s in January. Not all the does will be bred. So the does that were not bred will come back into estrus in 24 to 28 days. This second estrus cycle is called the Second Rut.

Which Deer Are Involved In The 2nd Rut?

The mature does that were not mated and bred during the initial Rutting period will be become active for the 2nd Rut.

Obviously the Bucks will be involved too, that’s a given. But, in my experience, there is something quite different about the bucks behavior  in the 2nd Rut. (I’ll come back to this.)

Ok, TAAA DAAA, I have some big news.

Year’s back I read an article by a famous deer hunter in Field & Stream magazine. Mr. Famous was asked, “When do does first come into estrus?” His”expert” answer was at 2 1/2 years of age.

He didn’t have a clue.

Onward … to Taaa Daaa.  Here is the real story. Some does come into estrus earlier or later than the Peak Rut. So some fawns are dropped as early as the April wild turkey seasons. (The whitetail gestation period is 6 1/2 months.)

Some of the early fawns will be 6 or 7 months old in December. And many of them will come into estrus. I know this, from experience, for a sure and certain fact.

So the number of does that are in the deer woods during the 2nd Rut is a larger number than just the unbred does.

The way I see it is this:

The 2nd Rut has fewer mature does in the mix than the Peak Rut had. But having older fawns in the mix increases the number of estrus does afield.

Plus, fewer hunters are in the woods this late in the season and the hunting pressure is less too. And there is more movement during daylight hours than there was during the rut (when the maximum number of deerhunters are hunting and their pressure in the deer woods forces the bucks to either be nocturnal …or only move in areas where hunters do not go).

In short, when you bowhunt the 2nd Rut you are in a situation where you could have an opportunity to harvest a buck, or a doe if you want.

In my experience, there are some major differences with buck activity during the 2nd Rut. Lets go into that next…

Speaking Of The 2nd Rut…