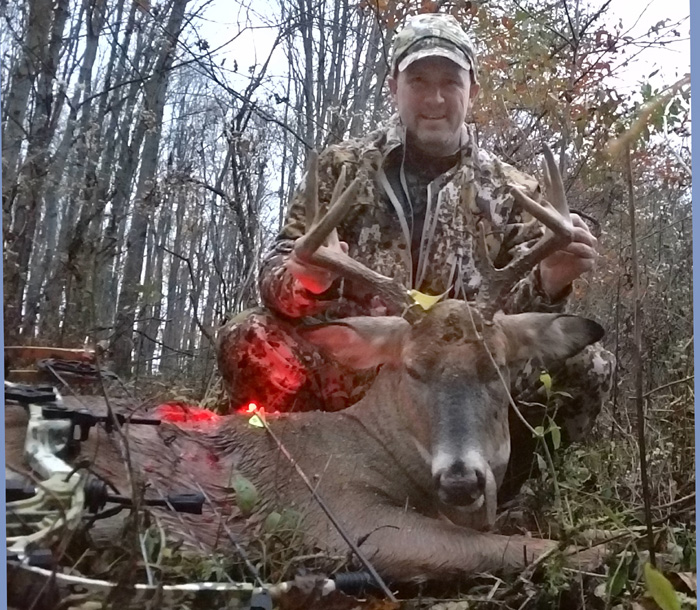 November 5th through the 10th would be the last full week of the PA archery season. Looking at my schedule, it was clear, I was going to be very busy. On Monday, Tuesday, Wednesday, and Thursday I had to coach soccer. The only bright spot was that my practice on Thursday didn’t start until 6:30 pm. With the time change I could easily get out for at least an hour to hunt on Thursday. The only issue was where I could hunt. Soccer practice was going to be in Erie, and it was going to be impossible for me to hunt the Heartbreaker Farm that evening. Logistics just did not allow for that to happen. At least, I had a few days to think of a great place to hunt.

Through the week I watched as it rained Monday, Tuesday, and Wednesday. I was happy when I watched the news and saw that Thursday was going to be in the mid 40’s and NO RAIN! Still thinking about where I was going to hunt, I had it narrowed down to two options; across from my house, at the 100 acres, where I had two stands or, the second choice, a little 10 acre piece that was a great spot. The wind was going to be marginal for hunting the two stands at the 100 acres, so I decided I would hunt the 10 acre plot.

Thursday, November 8th, arrived and I had parent teacher conferences all day. Between meetings I kept looking out the windows and about 10:00 the rain had stopped. I wrapped up my conferences and headed home to get into the woods for at least 2 hours.

Wanting to get into the woods as soon as possible I quickly grabbed my gear and made the quick two minute drive to the property. Once dressed I sprayed down with cover spray, hoisted my climber on my back and headed to my lucky tree.

The ground was still wet from the morning rain and the air was cool. Twenty yards into the wood lot I saw six tails ahead of me heading deeper into the timber. I continued my slow walk to my lucky tree  and my heart dropped.  The loggers had cut it down.

With time winding down, I picked another tree located close by, attached my climber and then went to set up my Buck Cages, loaded with Smokey’s Doe in Heat Lure and Smokey’s Rut N Bucks. I had a pretty good feeling bucks would be cruising looking for receptive does. I returned to my climber and went up about 15 feet.

Once settled in I said a prayer for safety and peace. For about a half hour I sat and watched the woods quietly soaking up all the sounds. It was so peaceful to just relax and listen to everything around me. Around 4:30, I did a rattling sequence with a few grunts. I could hear deer coming my way and saw a few does skirting the edge of the swamp behind me. The does disappeared into the swamp and everything was quiet again. I decided to enjoy a snack but never got to take a bite as I saw horns coming my way.

I stood, picked up my bow, switched on the camera and waited for the buck to present a good shot. The buck worked his way toward me, downwind and had no clue I was watching him. When he was about 15 yards away, he turned right and headed toward my Buck Cages. I followed his every move and waited patiently for him to turn broadside. When he reached the Smokey’s Doe in Heat he turned to his right and stopped.  As he did, I noticed an open wound behind his front shoulder. I had ranged the yardage and knew the buck was 23 yards away. I set my HHA Kingpin at 23 yards and prepared for the shot.

Making sure to keep the buck in the camera, I slowly drew, found my anchor.  My pin hovered behind the bucks shoulder and I released the BEA Spartan. I watched as the red GloryNock found its mark. The Grim Reaper penetrated deep. I watched as the buck went about 40 yards and crashed in some tall grass. I could not believe everything had happened so quickly. I reached for my phone and checked the time, 4:45!

With the buck down, I quickly packed my gear and started down the tree. My feet were back on the ground, and I used my cell phone and made a video of the blood trail. The Grim Reaper had done a wonderful job. The blood trail was easy to see and follow right to my buck. I couldn’t wait to put my hands on him. 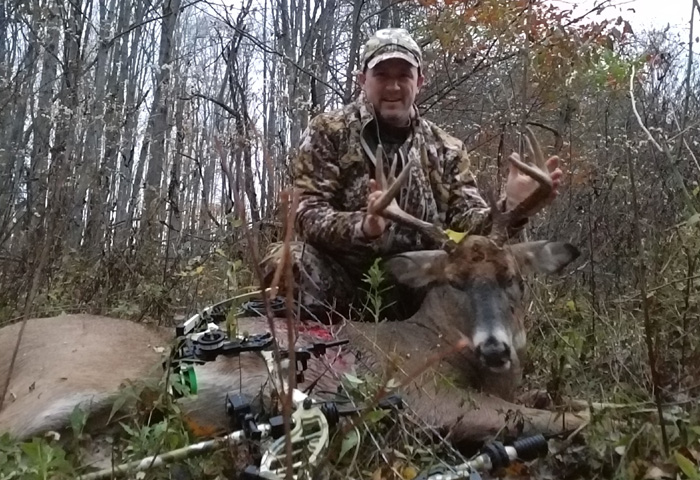 The buck laid motionless as I knelt beside him and gave a prayer of thanks. Looking him over I couldn’t help but wonder what had caused the wound in his side. The closer I looked at it I came to the conclusion someone had tried to shoot him and the arrow just glanced his side. Another interesting feature to this buck was the jet black mane running down the back of his neck. This buck was ripe and smelled like he had been rutting hard. He had great mass, dark antlers and 10 points.

Searching through my pack I found my PA license, filled it out and attached it to the deer.  The sun was setting and the woods was getting dark so I snapped a few pictures before it got too dark to help capture the moment I will never forget.

As I walked back to get my four-wheeler I let the whole hunt sink in. At first, I was disappointed that I had not put a tag on Heartbreaker but the more I thought, the more I knew I had made the right choice for hunting that evening. Returning to the buck I loaded him up for the trip home. The kids were excited to see the buck and both agreed he was one stinky deer. I laughed as they went back into the house shaking their heads.

Later that night, I was able to watch the video of my hunt. It was crazy how everything just fell into place. That night as I went to sleep, I couldn’t help but think about Heartbreaker. I wondered if he had been killed or if he was still alive. As I drifted off to sleep, I couldn’t help but hope he made it through the PA Gun season. What a monster he will be next year if he makes it through the rest of the year!