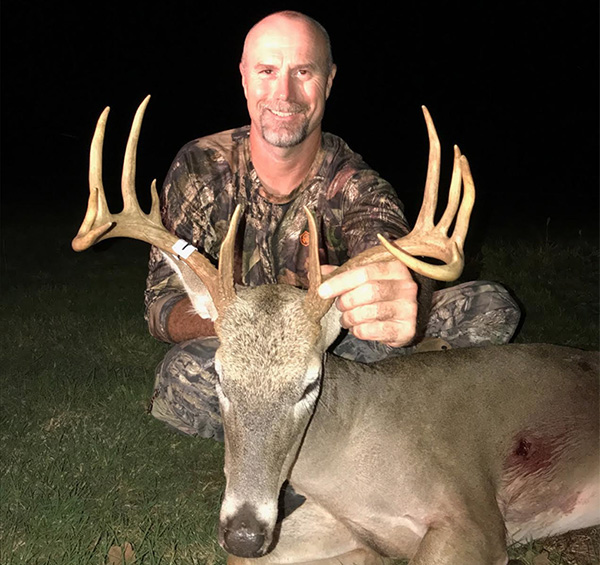 Before the bow season began Richey Hayes came down and put his game cameras out, cut back the new growth limbs and leaves that had grown this year and made sure his stands, etc. were ok, so that everything was good to go.

On September 29, opening day of the 2018 archery only deer season, Richey Hayes was down. The morning hunt was a zip. However, the afternoon hunt was gonna have some deer action.

At 5:34pm I received a text from Richey. He asked. “Any movement yet?”

I promptly texted back, “2 fawns” and he replied, “Only the trees moving here.”

His next text was immediate, “Just dropped.” And then added, “Pretty sure it’s this guy.” And he texted this picture that he took as he reviewed the pics from his game camera. This pic was on Sept 9th.

“Is his head on the ground?” I asked. “Yes.” Richey replied. So I asked, “Did you get a pass through?” He replied with, “Believe so, can’t see the arrow.”

And the playing field shifted directions as Richey texted, “He’s getting up.”

“Can you see blood on him?” I hurriedly typed and sent. Richey’s next text said, “He moved behind some trees. I can’t see him.” And in a few seconds he added, “He is walking down the hill.”

I texted, “Tell me about how he walked. Normal? Wobbly? Stumbling? Fast? Slow?”

He replied, “After the shot he ran for a short distance then started to walk slowly. He stopped and stumbled around. I watched him drop and he did not move for about 10 minutes. When he got up he stumbled backwards and started walking slowly down the hill with his back arched.”

We let some time pass and then Richey walked to where the buck had laid before. He took some steps in the direction the buck had gone.

I received a Thumbs-Up by text and the words, “Found him.” And then this picture followed.

Collin Cottrell and I drove down to where Richey was and recovered Richey’s 10-point buck. It was late in the afternoon as we loaded the buck in the bed of my pickup. We drove back to camp and Collin  took pictures of Richey with his buck.

On opening day of 2018 Richey Hayes put his buck tag on his second buck since he began bowhunting. One of the cool parts about it was I was lucky enough to be a part of it.

He used a crossbow with a bolt tipped with the accurate and lethal Grim Reaper Broadheads RazorTip. His stand consisted of a 7 foot metal platform that he welded together and then secured a Double Bull ground blind on top if it.