Speaking Of The 2nd Rut… 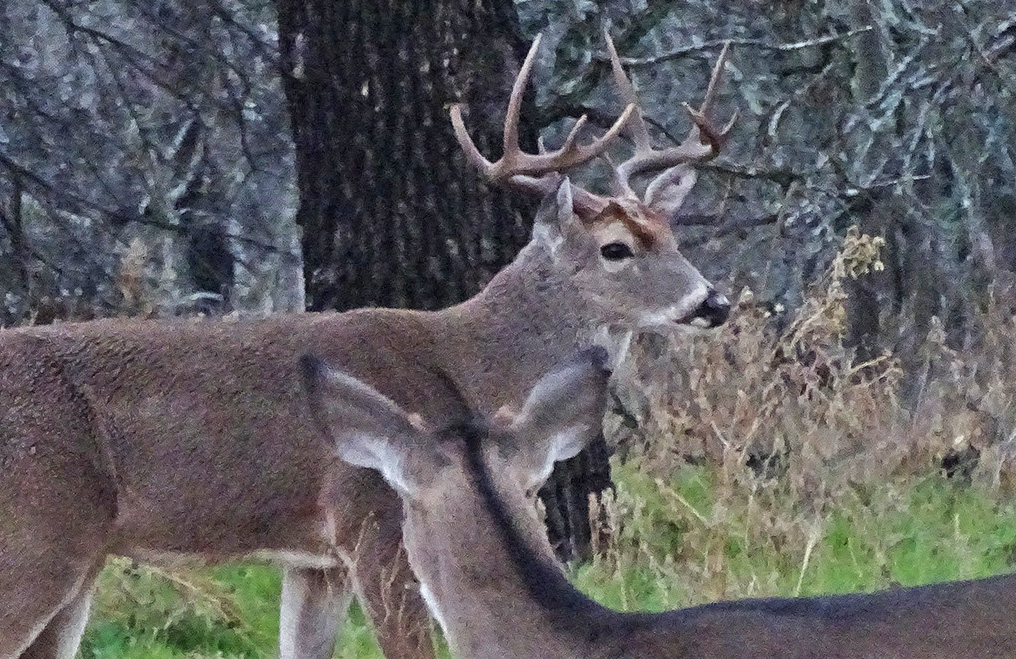 Weather wise, it’s unseasonably rainy, or more accurately; rainy, humid and cold … and also windy, which always makes the cold part of the equation feel even colder. Yesterday the latest bout with a few days of rain broke and switched to very overcast and occasional stints of drizzle.

During the rain the deer movement was shut down, probably due the cold rain and 30 degree plus winds. One thing that is always good about weather that deer don’t like to move around in is that when it stops they come out of hiding.

Yesterday morning I woke up at 3:00am and checked outside. Hurray, it was not raining! Since it doesn’t get daylight until 6:30am I slid back under the covers and ZZZed out until my alarm went off. At 6:05 I was in my closest ground blind. Heavily overcast skies brought daylight in at a crawl. But gradually deer shadows appeared in my view.

A very large bodied, big racked buck and a doe eased in and the doe browsed on the new growth alfalfa I’d planted. Other bucks materialized in the trees. The does’ scent had brought them in and put them in the frame of mind for some doe romancing. But as soon as a buck moved toward the doe, the bigger buck aggressively intercepted them. I wanted some pictures of this action but the daylight didn’t give me suitable camera light until they had gone.

Doe groups are back together now and after daylight showed up they began walking through the area. Soon, I noticed a lone doe and took it’s picture on the edge of the trees.

Hmmm, a mature doe by herself, I had to wonder if she was looking for a buck to hang out with. But no such luck. Because when she got closer, I saw a large buck behind her. She already had an admirer.

The buck stepped out of the woods and postured up. In spite of the fact that he could see the doe 10 yards in front of him, the buck picked up her scent trail and followed it.

He stiff legged  over to the doe and, being careful not to look directly at her, he stood near her.

I zoomed in closer on the bucks rack. He is a 10-point and his right G2 is broken. Notice his forehead, he has it discolored from rubbing trees and fighting.

Slowly, purposefully, the buck slowly went towards the edge of the nearby trees.

He angled to my right, probably headed toward a trail into the dense trees. Check out the size of this guys neck. He’s a real fat-neck buck.

I snapped a picture as the buck entered the trees … as the doe followed along behind him.

Deer movement continued and at one time I counted a total of 16 does, spread around in their individual groups. Yep, the rut is days passed.

But the 2nd rut is slipping up in us.