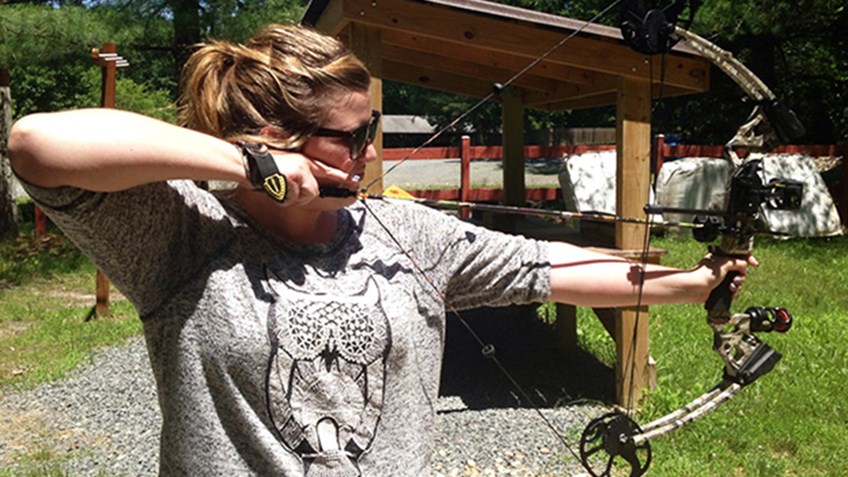 I’ve come to the tragic conclusion that I will not be bowhunting this fall. My draw weight is too low for me to confidently take my bow into the field to make a clean kill. When I attempted to turn my draw weight up recently, it was nearly impossible for me to draw consistently, let alone draw at all. I can shoot continually at 35 pounds, but that’s just not going to cut it for a humane hunt.

I decided to ask around for some tips on how I can strengthen my arms for the draw, and this is the feedback I received.

The best advice for training to be a bowhunter is simple: Draw your bow. A lot. Don’t draw it a lot at first; if you do you’ll only wear yourself out and maybe even hurt yourself. Start slow, drawing your bow maybe only a dozen times a day if your upper body is not conditioned for the work. If you can’t draw your bow set to a hunting weight of, say, 60 pounds, turn it down to something you can manage perhaps 30 or 40 pounds, and start there; no sense straining without actually learning how to draw smoothly. From a dozen draws, progress until you can eventually draw the bow 30-40 times per day.”

Each time you do, you’ll condition and strengthen muscles you may have never known you had.

The muscles used to draw a bow reside in your arms, chest and back. Note that all these muscle groups reside in the upper body, where women typically are at a disadvantage because their upper bodies are not as developed as those of men. Many people watch the work involved in drawing a bow and assume it’s all arm strength-not true. Yes, your arms kick in when your biceps on your strong arm and triceps on your weak arm do their jobs, because they’re surely needed (When drawing, you essentially pull with your strong arm and push with your weak [support] arm). But drawing a bow correctly means chest and back muscles kick in soon after the biceps and triceps get things started. Overdo it on day one and you’ll see what I mean: Your biceps won’t hurt nearly as much as the muscles between your shoulder blades, your trapezius.

Some new bowhunters search vainly for exercises or even exercise machines at their local gyms that may help them condition and build strength in their arms, chest and back. Yes, there are many such exercises that exist to strengthen each of these muscle groups, but they’re not much good for conditioning your body and mind to the nuances of drawing a bow. Like I said, the process resides not just in your arms but in your chest and back, too. Moreover, as you become accustomed to what’s in play during the draw, you’ll realize how important the process that plays out in your mind becomes.

By the time you’re able to draw your bow 30-40 times per day, you should be comfortable feeling the effort of your back muscles in the process, and even twitch your back to adjust your sight picture, your release and more.

While you’re at it, you might as well practice marksmanship. Conduct your practice sessions outdoors, where you can release some arrows. A dozen well-placed arrows, released with focus, are much better than two dozen flung without concern.

I’m not into gyms or workouts with weights, so the way I condition muscles for drawing a bow is by drawing a bow. Performing the actual physical activity strengthens all the muscles needed for the task, including those in the back and shoulders. If you’re new to bowhunting or weak from the offseason, lower the draw weight of your bow so you don’t overstress muscles. Start early, at least by May or June if you plan to hunt in the fall, and gradually increase draw weight as muscles become conditioned. The nice thing about this method is, since you’re drawing the bow, you might as well shoot, too, and work on your form at the same time.

Hunting guide and writer, Mia Anstine, suggested her article from WomensOutdoorNews.com, “How to Stay in Shape for Archery,” in which she shares tips such as using the Bow Trainer resistance-training tool. Another suggestion was to use a latex or flex workout band to simulate the draw and build those muscles. Read the full article here.

Building upper body strength certainly will help, but… I know plenty of “Gym guys” with toned upper bodies that can’t draw the bow I have. At the same time, I can’t lift the weights they do. Different muscles are at work. So while it’s a good idea to build upper body strength in a general “gym” way, the only thing you can do to train your “bow muscles” is to shoot your bow. Draw a minimum of 10 times a night, increasing poundage gradually when you can.

Whether I hit the gym, or the archery range, simply practicing the drawing motion with resistance repeatedly to build the deltoid, trapezius and latissimus muscles is clearly the answer. I better get to it!

Support the Archery Hall of Fame