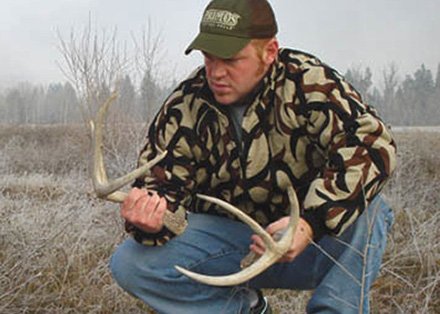 Hey Young Bowhunters, deer season has come and gone in most states. Very soon, one of the most exciting outdoor challenges awaits the hunter willing to get hit the woods in search of antler bone.

While the hunt for deer and other big game is over until the months of spring turkey season arrive, it’s now prime time for one of nature’s most exciting pursuits – the hunt for shed antlers. These dropped treasures can be found at any time throughout the year, however the months of late winter and early spring tend to produce the best results.

Whether this is your first attempt to find shed antlers, or you’ve been hunting them for years, there are a few basic steps to take.  However, the true recipe for finding more bone is a watchful eye and a commitment to covering lots of ground in search of a buck’s shed prize.

As mentioned, late winter and early spring are prime times for finding sheds. This is due largely in part that antlers are much easier to see in the snow, as well as prior to the re-growth of ground cover. Once the snow melts and the undergrowth comes on, optimal visibility diminishes quickly.

To find a buck’s fallen headgear you must find where bucks travel and like to hang out.  This seems like a no-brainer, but it’s amazing how many would-be shed hunters hit the field in search of treasure without any method to their search.  Recall areas where you have seen bucks concentrate in the past, his can be food sources, travel corridors, bedding areas, etc.  Depending on the territory, bucks may or may not winter in different areas than where they were earlier in the season. This is where the legwork comes in to play.  You must put the miles in to find where those bucks hang out in the later winter months.

I love to key in on trails leading to and from food sources and trailheads leading in and out of food plots or agriculture fields.  These trailheads at the edges of fields can be a particularly ideal spot to pick up a shed if it has a fence around its border.

A sudden jolt from jumping a fence is often all it takes for a buck to pop a loose horn off as he travels in and out of these fields. A creek or river crossing can have the same effect on helping a buck drop an antler.

Big bucks tend to hang out in the thickest cover they can crawl into. These tangled thickets are often just what it takes to pull a loose antler off a buck in the late season. So as you scour the ground for bone, don’t neglect to look for antlers that are entangled in thickets at “horn-high” levels. Thickets, cattail swamps, and thick cover on south-facing slopes are ideal spots to find buck beds. Be sure to check out these types of areas when you encounter them on the property you hunt.

Developing an eye for an antler is likely one of greatest elements of the pursuit. It’s amazing how some folks can walk right by an antler protruding from the earth only to have their buddy walk the same trail and see it sticking out like a bump on a log.

This past season I was with a couple of my buddies deep in the backcountry in pursuit of deer and elk.  After a long, grueling climb up the side of a mountain we stopped to take a break on an old logging road.  We stood around talking for five minutes before I looked down and spotted a matching set of mule deer sheds less than a yard from where the three of us had been standing.  Learn to decipher the difference in a sun-bleached antler and a stick or the brown blade of grass. Train your eye to see those subtle changes in the landscape and you’ll be on your way to finding more shed antlers.

The beauty of antler hunting is that there is no need for lots of equipment. However, a quality pair of optics are priceless for the avid antler hunter. A good pair of binoculars will save a ton of steps as you can determine whether or not you’ve discovered a shed without having to walk all the way up or down a hill, or across a wide open field. Simply glass suspicious looking objects from a distance and then either move on or go pick it up.

Last year while hunting late season whitetail in a river-bottom, a parade of deer, including a young 2 year old buck, went to feed in and around a farmer’s round bales of hay. The buck went in to the hay lot with both sides of his headgear, however when he left he was half the buck he used to be. While feasting on one of the hay bales, the buck hung his left antler in the bale, popping it loose.

On that mid-January day, as I watched that half-racked buck walk away I knew that while hunting season was drawing to a close, in a way it was just beginning. It was time to close the books on a season past and open a new chapter on the season to come. Finding the treasured antlers of animal that made it through hunting season keeps us longing for next season when we’ll once again pursue the prize.  So when spring break rolls around this year, grab a few friends and enjoy more time outdoors in search of sheds.

As mentioned, a quality pair of optics can improve your odds for success while in pursuit of shed antlers. Instead of hoofing it all the way across a field to investigate what appears to be an antler tine, simply glass it and if it is one, go.

One new optics option with top optical performance for all your big game pursuits is the Henry Privant 8×42 wide. This is a compact, easy to use and carry, premium binocular at a much fairer price than the big name brands. Robert Hoague recently did a Review on these binoculars, check it out on this link. You will also see a video with some outstanding mule deer.

Learning When To Take The Shot

How To Save And Store Venison