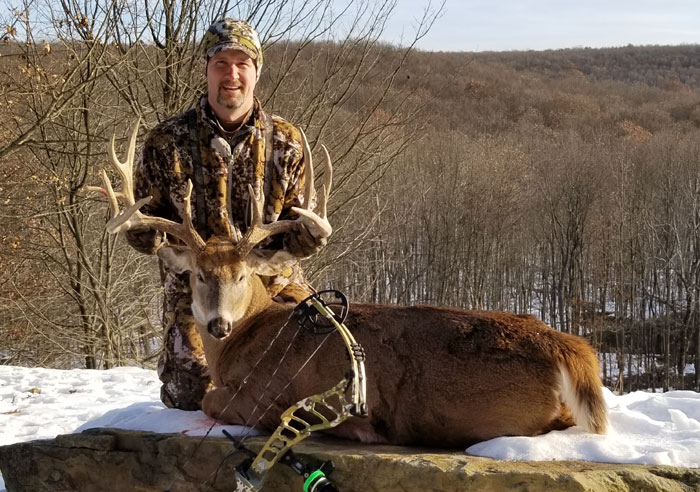 The state of Pennsylvania is a mostly rural state and is around 46,055 square miles. Besides the larger cities of Philadelphia, Pittsburgh, Harrisburg, and Erie the rest of Pennsylvania is made up of small cities and towns. Pennsylvania has the Appalachian Mountains, fertile flat lands, gently rolling hills, vast creeks, streams and rivers, and many acres of farmland. All of this together makes Pennsylvania an amazing state to hunt large game.

Steeped in tradition Pennsylvania is one of only a few states that still has Sunday closed to hunting large game. Pennsylvanians are able to hunt whitetail, black bear, and there is even a draw for hunters to hunt elk. Small game is still plentiful with grouse, pheasant, woodcock, squirrels, and rabbits. With all of the lakes and abundant waterways duck and goose hunting keeps hunters busy through the entire hunting season.

I spend a great deal of my time hunting the Northwest corner of Pennsylvania in Erie, Warren, and Crawford counties. Abundant farmland and woodlots make the hunting very enjoyable. It is not uncommon for me to look for large State Game Lands to hunt bear or whitetail. Pennsylvania has nearly 1.5 million acres of game lands to hunt and they are easy to access.

After harvesting my buck in archery season, I began to turn my attention to the upcoming bear season. Searching for areas to hunt, I came across the website for Mountain Valley Preserve that not only provides ranch style hunts for whitetail deer on their 200 acre preserve but also offers free range hunts for whitetail and bear on 1,200 acres.

M.V.P. is located in West Decatur, Clearfield County Pennsylvania at the base of the Appalachian Mountains. The hill and woodland terrain is perfect for whitetail and bear. Damian Albrecht and Paul Keller operate the preserve and have a 17 year history in raising whitetail deer. I had a ton of questions so emailed Damian who sent me his personal number. We had a wonderful conversation about his free range and ranch style hunts. After our talk I was even more excited about looking into a future hunt.

Bear season was quickly approaching and I was invited by Scott Spaid to hunt his property in Titusville, PA. I had hunted this property before and knew it held some bear so, I spent the day hunting with Scott and his brother. The day was perfect, with a coating of snow, I was confident I would see some action.

I hunted a ridge overlooking a deep valley in the morning. The scenery was breathtaking and the morning was calm. I saw a few deer work through the valley but did no bear. I went to the cabin for lunch and met with the others in camp. Nobody had seen any bear in the morning.

For the afternoon, I decided to still hunt and look for fresh tracks. Not long into my afternoon stroll, I cut a nice set of tracks going up the mountain that I followed. I covered a lot of ground but never did catch up to the bear. Eventually, with light fading, I had to turn around and hike back to camp. I let the others know that I had found a set of tracks but never did see the bear. The Pennsylvania bear season runs only a few days and I never did get out again to hunt.

I was still interested in hunting Mountain Valley Preserve, so I contacted Damian again and set up a date. With Thanksgiving right around the corner I knew there would be a few open days for me to go so booked November 23rd. I couldn’t wait.

Thanksgiving Day was a wonderful day with my family. After lunch, I spent time talking with other family members about my hunting adventures during the fall. Many of them were getting ready for the opening of PA Rifle Season but they were excited to hear about my upcoming trip to M.V.P. Sharing the website with them they checked out what was offered and thought it would be a great place to visit. I was excited to get home and pack for my hunt the next day!

On the morning of the 23rd, I had an appointment to get hooked up to a heart monitor. I arrived at 8:00, got my monitor and then made the short 2.5 hour drive to M.V.P. I arrived before lunch time and was greeted by Damian and his brother-in-law Scott. The day was in the high 20’s and there was still a good 4-6 inches of snow on the ground. Damian took me into the lodge, which is an amazing, spacious, 3 bedroom, ranch house. Once in the lodge Damian showed me around and I immediately fell in love with the game room. Moose, mule deer, turkey, black bear, whitetail and other beautiful mounts decorated the room. A large stone fireplace with multiple cozy couches and a pool table finished off the room.

On your hunt with M.V.P. you are treated like family. For 3 days you hunt, eat amazing food and enjoy the mountain view. Not far from the lodge you’ll find the famous Denny’s Beer Barrel Pub, home to some of the best burgers in the US! Damian showed me to my room, and I dressed for the afternoon hunt.

Damian and Scott showed me trail camera pictures of bucks on the property and I was very impressed. Next, he talked with me about how he and his business partner, Paul, had raised whitetails for over 17 years. They decided to start their own place to hunt and that was how M.V.P came to happen. Mountain Valley Preserve had only been open to the public for a few years and they are the best kept secret in PA. Being extremely proud of the lodge Damian also shared how they loved having hunters in from ‘Moment of Peace Adventures’ and Disabled Veterans.

After the tour and hearing the history of the outfit, we were ready to head out to a Muddy Blind to hunt for the evening. I grabbed my pack and bow as Damian fired up one of the UTV’s. On board we took the main trail back to the property. The air was cool and crisp and the sky was clear. The sun, though bright, gave very little heat on this day. The Blind was tucked away in the back of the property on a ridge. I unloaded my belongings as Damian lit the propane heater in the blind. I climbed in and set up my cameras, nocked a Black Eagle Spartan with a lethal Grim Reaper Carni-Four and waited.

Scott, Damian and I were all talking about hunting and the beautiful view when Scott spotted a buck working our way. We had only been in the blind for about a half hour when this buck popped over the ridge. With the snow and the sun being so bright the buck was easy to see. I glassed the buck and then turned on the camera. Damian knew this buck well and said he had a bad attitude. The buck methodically walked our way, slowly closing the distance. He would periodically put his ears back and posture as he walked. Damian and Scott told stories about this aggressive buck and the more I watched him the more I was impressed.

The three of us watched as the buck hung up just out of bow range. Damian took over the video camera as we all hoped he would come into range. I had opened 3 windows to the blind and needed the buck to come into that shot window. The buck had different plans as he headed behind the blind. We all sat still and quiet watching him feed behind us. For a few minutes, he searched the open woods and just hung out behind the blind and then he turned and walked toward the blind.

Cautiously, the buck passed by the blind at 5 yards. I waited for him to make it into the window before I drew. The buck stopped about 10 yards away from the blind, and he was quartering away. Damian said he had him in the camera, as I drew my bow. Finding my anchor, I let the pin float on the spot behind the bucks shoulder, exhaled and let the Spartan fly. I could hear the Grim Reaper open as the arrow found its mark. The buck kicked as the arrow blew through him running about  20 yards before falling to the ground. The arrow had entered behind the front shoulder and exited out the opposite side of deer’s neck. Within seconds, the buck lay lifeless in the snow.

There was, of course, no tracking needed but the crimson blood showed easily on the pure white snow. We were all excited as I hurriedly packed my gear so I could go out and see this giant buck. The three of us walked to the buck and stared at his amazing headgear that was wide with 14 scorable points. Damian ran the camera as I talked about the hunt and the experience at M.V.P. Together we loaded the buck into the UTV and headed back to the lodge for some pictures.

With pictures done and the sun still hanging in the western sky, I asked Damian if I could go to another blind and just watch deer move through the property. He took me to a blind overlooking a large food plot where I set up my camera and waited for deer to move. About 45 minutes later some bucks began coming to the food plot. Damian was right, he did have some amazing genetics at his place. I watched as bucks fed and knocked antlers together. As the sun was setting I could hear Damian coming back to get me. I packed up and waited by the blind.

The day was coming to an end and I couldn’t believe all that had happened through the day.  The sunset was a beautiful way to close out the day. In the distance I could see large bucks in the skyline as they walked through open woods. The air was crisp with no wind. Damian picked me up and we headed back to the lodge so I could change out of my hunting clothes. As we followed the path, back to the lodge I could make out the silhouette of deer in the distance as the last rays of sunlight fell behind the horizon.

Back at the lodge Damian, Scott, and I continued talking about the outfit. We relaxed and enjoyed stories of previous hunts we had all been on. Looking through shed antlers my jaw dropped at the mass and thickness of some of the sheds from 2017. More trail camera pictures were brought out showing deer that were still on the property, and I was amazed. As the evening passed quickly, I thanked Damian and Scott for their hospitality, packed up my truck and headed out the door.

Before leaving, Damian and I made plans for another hunt in 2019. I am looking forward to heading back in October of 2019 for another exciting hunting adventure at  Mountain Valley Preserve. Should anyone want to join me, feel free to let me know. I always enjoy the company.