The Truth about World Records 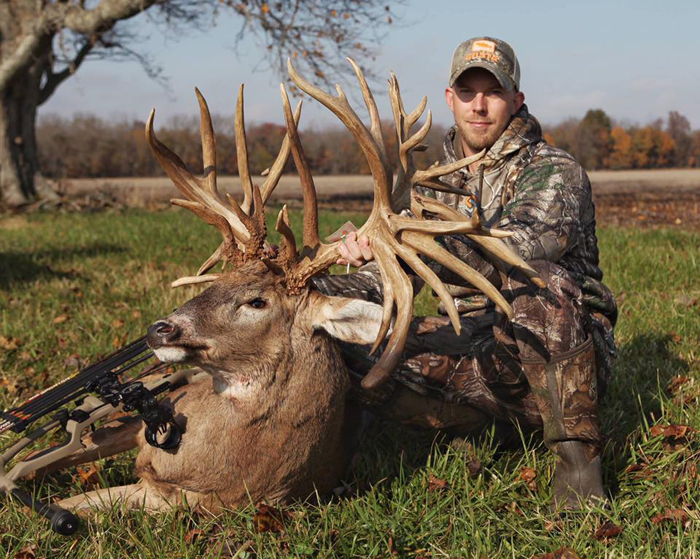 RECENT NEWS THAT A NEW WORLD RECORD non-typical whitetail deer was announced at the annual Archery Trade Association’s January gathering in Louisville spread across the archery community like a California wildfire. Initial word was a giant Illinois buck, arrowed in early November by a bowhunter named Luke Brewster, not only broke Mike Beatty’s 18-year-old record but shattered it by some 15 inches of trophy antler. The announced score was an incredible 320-5/8 inches.

Photos of the giant deer with its beautifully freakish antlers offered positive proof that Brewster’s buck was indeed an extra special animal. Its score would make it the largest whitetail buck ever killed by any deer hunter. “Unreal” and “unbelievable” were commonly used terms. Not surprisingly, some skeptical disbelievers immediately speculated it had to be a “high fence game farm, genetically altered” whitetail, not a wild free-ranging buck. But subsequent checking of the hunt, kill, and history of this mystery buck put the kibosh on any hint of fraud or deception regarding the huge non-typical.

Turns out 30-year-old Luke Brewster, a Marine who’d been serving overseas, left his Virginia home last November and headed to Illinois for some bowhunting on a family farm during the November rut. Once there Luke teamed up with three good friends who’d been pursuing the giant non-typical buck for several years. As luck would have it, Luke ended up seeing the deer with its jaw-dropping antlers and made the killing shot – a shot destined to rewrite deer hunting history.

That’s not to say misconceptions did not arise. Some electronic and print media outlets instantly blared headlines announcing that a “New World Record” had been crowned. That statement is misleading if not downright false, simply because the Brewster Buck in fact is a “pending” World Record. Officially, it cannot be bowhunting’s new numero uno non-typical whitetail until after submitted for panel measuring by a designated team of the Pope and Young Club’s veteran and eminently qualified official scorers. Ditto for any likely Boone and Crockett Club recognition and honors. Any initial scoring must be confirmed.

As things now stand, the P&Y panel judges will gather in Omaha in late February to remeasure all trophies invited and delivered prior to the Club’s April 10-13 Convention and Awards Banquet. Records Chairman Ed Fanchin confirmed to me that the Brewster buck will be among the animals being measured. An announcement naming all new P&Y World Records will be made Saturday, April 13. Additionally, the Brewster Buck would also be favored to receive the coveted Ishi Award, the highest honor that the Pope and Young Club can bestow on any North American big game animal.

You need to understand that each year of a convention/awards banquet, P&Y and B&C Club officials routinely extend invitations to a handful of successful hunters asking them to submit their outstanding big game trophies for panel measuring and possible awards. If the invitation is declined and the entry score is unconfirmed, the trophy will not be officially proclaimed a World Record. It’s also possible, but far less likely, that some initial scoring error exists, is caught by the panel judges, and a final official score changes enough that the animal is denied World Record status.

Like most hunters, I’ve never taken a World Record big game animal. But in 2000, during a bowhunt in Canada’s Northwest Territories, I stalked and killed a giant white-horned muskox that was later scored at 126-2/8 inches, exactly one inch off the existing 127-2/8 P&Y World Record. Subsequently, after my bull was scored and entered in the P&Y bowhunting records, I received invitations from both national record-keeping organizations to submit my muskox horns for a follow-up measuring session. A team of veteran panel judges later confirmed my bull’s initial P&Y score and the bull received top B&C and P&Y awards for muskoxen taken during each club’s’ respective recording periods. Today, nearly 20 years later, it still ranks near the top of bowhunting records for that unique Arctic species. Had it scored 1-1/8th inches higher, it would have been a “pending bowhunting World Record” until the required confirmation measuring sessions That’s just the way it works. Scores of all top trophies must be confirmed by teams of measurers before any World Record is official.

Speaking as an official Pope and Young Club measurer (since 1978) and a past P&Y panel judge, I doubt that any subsequent measuring team will find a 15-inch scoring error in the Brewster Buck’s announced score. However, it is still possible the buck’s final score will not be 320-5/8. When dealing with eighths of an inch (for antlers and horns) and sixteenths (for skulls), it’s possible there could be a minor deduction – or increase – in the final record book score. I know that particular truth from personal experience, because in June of 1971 I arrowed my first P&Y black bear on a Colorado bowhunt. After the 60-day drying period, I had the bruin officially measured at 20-5/16 inches (length and width of the bruin’s skull).

Months later, prior to the Club’s 1972 banquet in Denver, I received an invitation to submit the skull for P&Y panel judging. I accepted, shipped the skull to Colorado, and received an Honorable Mention plaque. However, the delay between the first and second scoring sessions ended up with a slightly lower final official score of 20-4/16 inches. Similar time delays can and do cause such minor differences, especially with species that have horns or antlers known to suffer from unusual normal shrinkage or those improperly stored near heat sources.

TO CITE EXAMPLES OF POSSIBLE WORLD RECORDS that were never officially honored, I can distinctly remember attending the 2002 ATA in Nashville where Mike Beatty’s new World Record non-typical whitetail buck was on public display. Beside it were two typical whitetails believed to top Mel Johnson’s “Beanfield Buck” 204-4/8-inch World Record (killed in 1965). In fact, I took a photo of the three men and mounts of their giant bucks for publication in BOWHUNTER Magazine.

All three of these “World Records bucks” made for an impressive display with a combined total nearly 700 inches of “trophy bone.” As I recall, in 1996 Iowa bowhunter Sam Collora had arrowed a buck that initially scored high enough to seriously challenge the Mel Johnson buck. However, P&Y panel judges eventually ruled that one of the Collora buck’s tines was in fact a common base point that after deductions lowered its P&Y score by some 10+ inches to a final official score of 193-3/8 inches.

The other enormous whitetail in my photo was an Alberta buck killed in 2001 by bowhunter Wayne Zaft. Its initial P&Y score was announced to be 206-7/8 inches; however, panel judges later found another incorrectly measured common base point that dropped the final score well below Johnson’s 204-4/8 World Record score. I seem to recall that Zaft was so disappointed that he declined to enter his buck into the P&Y records.

Perhaps the most known high profile “World Record Whitetail That Never Was” belonged to Michigan bowhunter Mitch Rompola, who in November of 1998 killed a wide-antlered (38 inches), 12-point Michigan buck that wore antlers measuring an incredible 216 -5/8 inches. Had it been later confirmed by P&Y and B&C panel judges, that super buck would have toppled Boone and Crockett’s World Record Saskatchewan giant tagged by Milo Hanson in 1983 (213-5/8), as well as Mel Johnson’s P&Y Number One typical whitetail (204-4/8).

Unfortunately, controversy immediately arose with suspicions of a fake rack, “deer farm buck,” and numerous broken promises to have the antlers x-rayed, cape genetically tested, and the hunt story closely examined. Rompola’s subsequent refusals to have the buck’s antlers submitted for B&C or P&Y scoring, and his later arrests on charges of mail fraud and public voyeurism, almost guaranteed that the truth about the Rompola buck will forever be unknown

World Records are indeed special, and as the cliché goes, all records are made to be broken. It’s the who, when, and where the next whitetail record will fall that remains the obvious question and the stuff of deer hunters’ dreams.

NEW: Find Your Arrow With Your Smartphone