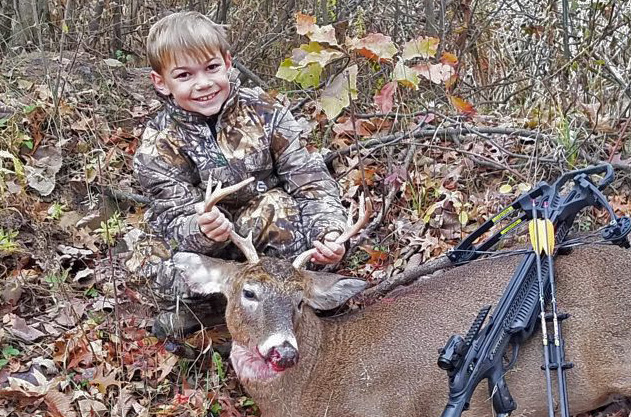 By Jace Walters from The Young Archer

Most days when my dad is in town from work we go in the tree stand for one to two hours before school starts. The morning of my 10th birthday my dad woke me up to go deer hunting but I didn’t want to go because it was my birthday and I wanted to sleep in before school. My dad said that I could sleep in the entire weekend but today I had to go deer hunting because he wanted me to try and get a deer for my birthday since I never got one before. Before we walked out the door I asked if I could bring pepperoni to see if it would help me with deer hunting, he said yes. I asked because if I am shooting bad at an archery competition, eating pepperoni helps me shoot better. I know deer are curious and I thought they might be curious to see what the smell was of my pepperoni.

Sunrise is around 7:30 and that means shooting time is 7:00 so we get out to the tree stand about 6:30. When we got in the tree stand we both took a bite of pepperoni and then I went to sleep. I usually take a nap in the tree stand and tell my dad to wake me up if there is a deer. My dad only woke me up one time before to shoot a deer and that was last year, but it was too dark for me to see the deer in my sight because it was only 5 minutes into shooting time. My dad shot that deer with his crossbow because he is a good shot, but he said it was still a hard shot for him because it was still sort of dark. That was the first time I saw someone shoot a deer.

Before I fell asleep my dad was joking around that a deer was going to come around and say happy birthday to me so I should stay awake. At 7:45am he woke me up because there was a buck 30 yards away and behind some brush and he was walking towards us. My dad kept saying wait, wait, wait because it was facing us and he wanted me to take a broadside shot in the open.

Once it got to a tree stump that I knew was at 15 yards away I said nope and boooom I took the shot with my crossbow while it was still facing us and my dad was still saying wait. When it ran in front of us I was like GOTCHA and my dad was so proud and happy for me that I shot my first deer and it was a buck and it was my birthday and it was with him. I wanted to jump out of the tree stand and go chase after my deer, but I knew I had to wait 30 minutes before I could go and look for my deer to let it lay down and die.

When we got out of the tree stand we were both walking really fast because we wanted to find my deer. But before we started walking my dad cocked my crossbow again so just in case my deer wasn’t dead and I could shoot it again. Me and my dad both looked for my deer for about 15 minutes together then we split up and looked around by ourselves for maybe a half hour. We met back up my dad said he called me out of school for the day. They asked if I was sick and he said nope that I was in the woods tracking my birthday buck. We started walking around again together and then we found my deer as we started walking.

I swore I already walked past that spot where the deer was. I was so excited when I found my first deer, and my dad was very happy too. He told me he was getting worried that we wouldn’t find my first deer, he’s never shot a deer and not found it before.

When I walked up to my big deer I counted all the points, it was a 7 point buck. I looked at the spot where I shot my deer and didn’t see my bolt. So then me and my dad started looking around for my bolt where we knew the deer ran, after awhile we couldn’t find it so we went back to my deer and called in my deer tag.

bolt sticking out the bottom of my deer. My dad pulled the bolt out and let me make the first cut then he did the rest. The part I didn’t like about gutting the deer was the sound and smell of it, but I did ask a lot of questions about parts inside the deer. We didn’t have to drag my deer to the truck since my dad was able to pull his truck right up to where we found my deer. My dad has a tall truck bed and my deer was big so it took us a while to get my deer up into the bed of the truck. I was in the bed of the truck pulling the antlers and my dad was lifting the rest of the body into the truck.

After we left hunting we went to see Scott Shockley who is the dad of Wyatt who is a friend that races motocross and hunts like me. I wanted to show Scott and the people at his work because they are hunters too. Then we went to Small Town Sweets who is a motocross sponsor of mine to get a birthday cupcake. While we were there they told me what design my dad picked out for my birthday cake, I liked the design but wanted to change it to a Minion archery cake because I like archery and Minions.

Then we went to my mom’s work so her and everyone she works with could see my deer, because I knew she worked with a lot of hunters. My mom doesn’t really hunt, but she was proud of me. Then we went to Papa Krieg who is a taxidermist and the dad of my motocross idol Todd Krieg. Todd Krieg raced professional motocross and I met him with my dad and brother at the 2013 Indianapolis SuperCross race on our Father Son Weekend Five. Todd was really nice and took photos with us, let us sit on his race bike and signed our sponsor banner that we were both sponsored by. Todd and Papa Krieg were really happy because I got my first deer and Papa Krieg is going to mount it for me.

On the way home I remembered the dream I had that night and told my dad, the dream was that I was going to get a deer on my birthday. I like it when dreams come true. Whenever I have a piece of pepperoni, let’s say it’s at an archery shoot I shoot much better than I was before I ate it. So that’s why I wanted to take pepperoni on my deer hunt, and it worked because I got a deer. I don’t know what it is about pepperoni, but all I know now is that anytime I go shooting or hunting I will always bring pepperoni with me.

ABOUT THE YOUNG ARCHER™

The Mission of The Young Archer™ is to promote, foster, and further the sport of archery worldwide by letting people who are interested in archery share their stories. In publishing these stories, we hope to inspire the spirit of good sportsmanship among archers of all ages, and our hope is to allow archers to relate to the stories that are submitted as well as inspire others to try archery as a sport or hobby. Visit The Young Archer.

You Can Hold Big Bucks On 40 Acres!