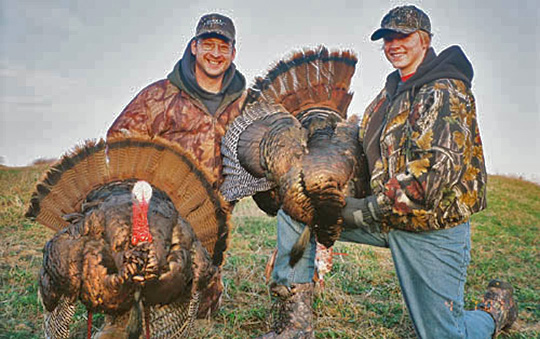 The big longbeard could not make up its mind. First he started for our full strut mounted decoy, “Bubba”, but as soon as a hen flew down from her overnight roost he was drawn away to her.

The big tom’s instincts told him to show Bubba who was boss … but this early in the season the hen was his primary objective.  After he determined Bubba was no threat his full attention went to the hen. The air around us shivered as he gobbled and exploded into strut and danced for her in the early morning light. He had gobbled at this hen since the first streaks of light had announced a new day and he was determined to show her he was the monarch of the valley.

18 yards away 15-year-old Dylan Steers sat in a Double Bull ground blind just waiting for the right time. This opening morning of Wisconsin’s Youth Turkey hunt found Dylan on his first wild turkey hunt with his mentor Matt Berg and me as the camera man. This morning things had happened fast. We heard gobbles even before it started to get light and soon we spotted wild turkeys in the trees just above the field on the ridge. The chilling 20-degree temperature was soon forgotten when they flew down. Matt and I were taking young Dylan on his first wild turkey hunt.

Our Bubba decoy was strategically placed 20 yards from our portable ground blind and a hen decoy was laying by the decoy’s feet. This set up strongly appeals to a boss tom’s instincts at this time of year. After the roosted wild turkeys landed all around us in the field, two of the toms came running our way. They met at Bubba and the dominant one quickly chased his subordinate counterpart down the field past our blind. Before he got too far a hen landed near Bubba and the boss tom hurried back to defend his territory.

During this awesome display of nature Dylan and Matt were trying to get Dylan lined up on the boss tom.  When the longbeard finally approached Bubba, Dylan had a brief window of opportunity; but before he was able to shoot, his opportunity had passed by. I could tell by his heavy breathing that Dylan’s heart was pounding hard.

The longbeard was now dancing back and forth between Bubba and the hen so quickly that Dylan did not have a clear shot. First the tom took an aggressive posture and approached Bubba, but without warning he turned and full strutted for the hen. He seemed to be having a hard time deciding whether he should kick Bubba’s butt or strut for his girlfriend. As the long beard vacillated between the two I heard Matt in the background whispering advice to Dylan.

The Merriam – Webster dictionary defines “Mentor” as “A trusted counselor or guide, a coach.” During the last several minutes, with his adrenalin in overdrive, Dylan desperately needed something to calm him down. Matt’s calm voice, okay it wasn’t always so calm, but it definitely helped Dylan concentrate.

At the shot the longbeard crumbled to the ground. Tension inside the blind exploded like a balloon and everyone shouted in excitement. I noticed Dylan trying to comprehend what had just taken place. It wasn’t a dream! It wasn’t a TV show! It was reality at its fullest! The look in his eyes, the smile that stretched from ear to ear, told me he was a hunter for life.

Matt has twin three year olds at home yet he takes the time out of his busy life to share his love of the outdoors. He works long hours every day but when it comes to mentoring kids he quickly volunteers and loves it. Why?

Matt Berg told me, “I have 3 children and six grand children, but for 30 years, without neglecting my own family, I have taken more kids from other families hunting then I could ever count. Why? We take these kids to our favorite hunting spots and share our secrets with each and every one of them. Why?”

“It is hard to answer that question with words, Matt continued, “I learned real early in life that the outdoors is one of the greatest treasures that the good Lord has ever given me. I have an appreciation for the outdoors that many people just cannot understand. I also have an appreciation for our youth and I enjoy combining my passionate interests.  When I look into a young persons eyes that is experiencing, perhaps for the first time, these great outdoor treasures I share their awe and excitement and I feel alive!”

Do you remember the special people you shared your accomplishments with? Those people become very important in your life even if just for a very short time but you never forget what they did for you! When I see the smile on these young people’s faces, hear the excitement in their voices, I relate to exactly what they are feeling.

They cannot get these feelings from video games or TV shows. They need to live it! The look on young Dylan’s face was priceless. I will remember that look for the rest of my life just like I remember the faces and the excitement of all of those kids that came before him!

This isn’t a feeling that is exclusively mine. I want everyone who has a passion to feel this same way! That passion does not have to be hunting. My oldest son Mike loves hunting but he has a passion for sports. He shares that passion by coaching (mentoring) kids as young as 5 years old in basketball and softball and has the pleasure of sharing these kid’s accomplishments as they grow into young men and women. I see how he relates to these kids and I know just what he feels every time one of these kids accomplishes something they set out to do. They high five, cheer, and laugh and all the while I can see the pride Mike feels for these kids. Your passion might be fishing, shed hunting, or camping. My point is there are kids out there everywhere just waiting for someone to show them how special life can be.”

How do you find these kids? While there are many outlets for kids that want to get involved one of the best is Ray Howell’s Kicking Bear Camps for Kids. These free camps are for kids 15 and under and designed to get kids hooked up with mentors. They encourage you to include not only your kids but also kids from outside your family.

They include an overnight camp out, an evening bonfire complete with with marshmallows, some archery and games for the kids and prizes for all the kids and mentors. These camps attract hundreds of kids each year and by attending one of these camps you will begin to understand exactly what I feel. The look on the faces of those kids when they shoot their first arrow is priceless. Even when they hear their name called for a door prize it is an event for them to remember for years to come.  We had met Dylan at one of these camps and we’vehave had several adventures since then.

Why do we do it? I cannot speak for anyone else but I do know why I do this! Because I love the way it makes me feel inside. I enjoy sharing their accomplishments and feeling their sense of pride. It is truly a feeling I never get tired of! What do I expect in return? I only ask one thing of these kids. I ask them when they are old enough to get at least one other kid involved in what they are passionate about. PAY IT BACK!

And for your enjoyment, here is a brief video about Ray Howell’s Kicking Bear.

Are Dangerous Predators Invading Your Neighborhood?

SmartPhone Technology Is A Game Changer for Us Hunters