Bowfishing. Do You Do It?

by Robert Hoague
in Bowfishing, Bowhunting Blog
0 0
A A
0 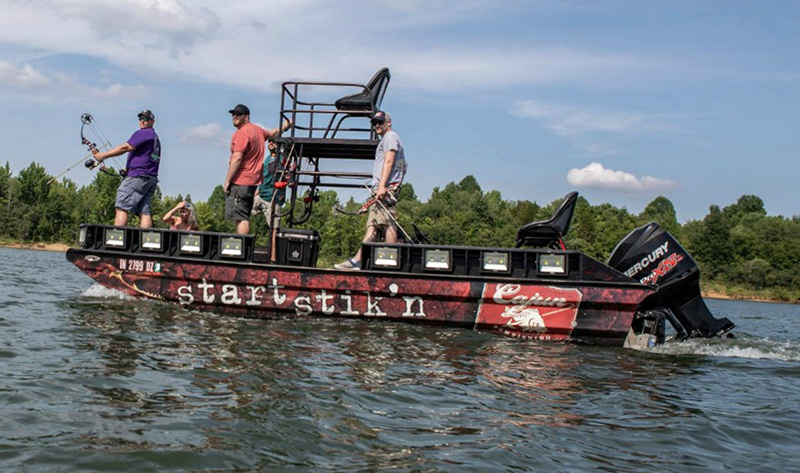 Archery Business magazine asked archery retailers from across the country the question on everyone’s minds as we dream about spring and summer — “How Popular Is Bowfishing?” Here’s what they had to say.

There are approximately 15,000 acres of bowfishing water within a 30-mile radius of our store. However, Wisconsin’s bowfishing opportunities are very seasonal. So it isn’t exactly a mainstream sport around our store like it is in other regions of the country. The Eau Pleine Reservoir, Lake DuBay and Lake Wausau are probably the most popular bodies of water in our region. The people who’re consistently successful bowfish at night from boats outfitted with lights and the whole caboodle.

We don’t stock a huge selection of bowfishing gear. We have several bowfishing-bow packages from a few manufacturers, as well as six or so bowfishing arrows and as many points. We also have a couple reels and rests. Basically, we have one endcap devoted to bowfishing equipment.

Most customers try bowfishing for the first time with their existing hunting bow, but they soon realize that bowfishing can be rough on equipment. Most who decide to continue bowfishing eventually invest in a bowfishing-specific bow. Some purchase an old clunker from a garage sale, while others buy a bowfishing rig from us.

We have a couple part-time employees who bowfish regularly. Most of the bowfishing enthusiasm generated within our store is directly related to them. Our entire staff has bowfished and can speak to the equipment needs and techniques, but it’s really those two employees who’re creating interest out on the sales floor. Plus, they’ve both set up boats specifically for bowfishing, so they can provide our customers with extensive information on lights, batteries, LEDs and generators, and how to position equipment within the boat, etc. If a customer has a question, they can answer it.

Bowfishing has been picking up a lot in my area since we opened one year and four months ago. At that time, there was only one guy outfitting for bowfishermen, and now there are four guys doing it. Some have gotten so busy that they’re basically doing it full-time. We’re not rolling a bunch of dollars into advertising it. Of course, if someone asks about bowfishing, we’ll steer them to one of the outfitters and make sure they get set up with all the right gear.

We stock bowfishing equipment from AMS, PSE and Cajun Bowfishing. We have several types of rests, reels, points, arrows and bow packages. I’d say our bowfishing merchandise covers approximately 30 square feet of our retail floor. It’s obviously not as popular as bowhunting or target archery, but we make sure we stock everything our customers need to get started.

Some guys don’t want to tamper with their bowhunting bows, so they purchase an AMS or PSE bowfishing-bow package from us. Others buy Genesis bows online or elsewhere, then outfit them on their own with reels and the other accessories.

We hold two bowfishing tournaments per year, so it’s very popular. Guys and gals can bowfish within 10 minutes of our store location. Even though bowfishing can be done year-round in Florida, the interest does taper off some during the fall when deer season opens. Florida residents are used to 75 to 80 degrees, so when temperatures drop below that, we all run into our houses and turn the heat on.

I’m personally very involved with bowfishing. While the sport is growing mostly on its own, knowing the products, using them and understanding how they work helps me encourage customers to buy them. I’m educated on all the bowfishing products we carry so that I can discuss them with customers who have questions.

Our bestselling bowfishing products are those from AMS and PSE. We promote buying a bowfishing-specific bow for the simple fact that they’re designed for it. Standard compound bows aren’t designed for bowfishing. The high letoff isn’t conducive to snap-shooting, which is a big part of arrowing fish consistently. You must draw and shoot in one fluid motion. You really can’t snap-shoot with a standard compound bow with high letoff; in fact, it can derail the bowstring, which presents safety concerns.

The package bowfishing rigs are very popular here. Few customers want to piece together a bowfishing setup on their own, especially if they know little or nothing about it. Bowfishing-bow setups popular in our store are the PSE Kingfisher, AMS Fish Hawk, and the PSE Discovery and Mudd Dawg.

Getting Started In Bowfishing