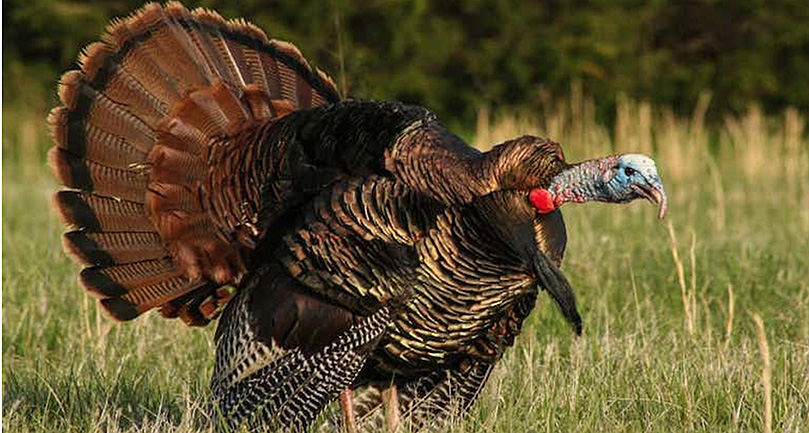 By: Scott Einsmann of Bowhunting360.com

To call turkeys in, understanding the different calls and vocalizations will make your turkey hunting more active and fun.

Wild Turkeys make a variety of sounds. It’s helpful to be familiar with all of them.

A yelp is a common sound made by female turkeys, called hens. Hens make yelps during spring to communicate with male turkeys, which are called toms or gobblers.

If a yelp means, hello, a cluck means, HELLO! Hens cluck to get a tom’s attention. That makes the cluck a great call when hunting. Hens usually make several clucks in quick succession.

Just as cats purr when content, turkeys purr while feeding and feeling secure. It’s a soft vocalization and a great sound to coax in skeptical toms. To complete the illusion of feeding turkeys, make soft purrs while scratching through leaves with a stick.

Unlike a purr, the putt is an alarm sound that alerts other turkeys to danger. It’s a sharp sound made once or twice, or several times in succession. Even though the putt usually means you’re busted, you can use this call to your advantage when a tom is puffed up in full strut, making it difficult to focus on an aiming point. When you’re ready to shoot, make a loud putt. This call will stop the tom and bring him out of strut. When it raises its head to look around, squeeze your trigger!

Gobbles are the sounds turkey hunters dream about. It’s the tom’s vocalization when responding to hens, and other sounds it hears. A booming gobble also gives away a tom’s position, which makes it an excellent way for hunters to locate them. A tom’s pent-up energy during spring makes it quick to gobble at almost any noise. That’s called “shock gobbling,” and toms gobble at crow calls, owl hoots, and even car horns and slamming truck doors. An important safety note: Hunters shouldn’t imitate gobbles.

The best way to learn about turkey sounds is to listen to them. You can hear all of these calls and many others on the National Wild Turkey Federation’s website. Click here to listen.

To call in a gobbler you’ll need turkey calls to mimic their sounds. Let’s review three of the most common turkey calls.

Box calls are great for calling loudly to attract distant turkeys. Box calls are easy to use, but take practice to produce realistic sounds.

A pot call, also called a slate call, is easy to use and produces loud to subtle calls to bring gobblers in close. A pot call consists of a pot and striker. The pot call has a wood or plastic body with a slate or glass surface. Strikers are available in different woods to customize the sounds.

Diaphragm (mouth) calls are the most versatile, but most difficult to use. Diaphragm calls wedge into the roof of your mouth, and you call by forcing air over the call’s latex reed. These calls require lots of practice to master, but they’re worth it. And because they’re hands-free, you can keep your bow ready while calling.

Turkeys roost in trees overnight, and fly back down in the morning, usually at dawn. Because toms often gobble at loud noises, it’s possible to locate them before first light. Listen in the dark and move closer after pinpointing their location.

A tactic called “roosting” is a good way to find turkeys the evening before a hunt, and lets you know where they’ll be at dawn. To roost a turkey, visit the site you plan to hunt before sunset. Ideally, you’ve seen turkeys or found their signs at this site.

Walk to a hilltop to watch and listen. If you don’t hear any gobbles, try to incite a “shock gobble” with a crow or owl call. Turkey calls can work, too, but if the birds haven’t yet flown up to their roost you risk attracting them to your site and spooking them. Make a loud, short burst of crow or owl calls, and then listen for gobbles. If you get no response, walk 100 yards and repeat until hearing a gobble. Call again until pinpointing where they’re roosted.

When returning the next morning before dawn, set up within 200 yards of the roosting tree. Set up your ground blind or hide in natural cover. Make soft hen yelps, and increase the volume until they respond. Once a tom gobbles back, remain quiet or stick to soft, subtle occasional calls. It’s tempting to call back and forth with roosted gobblers, but you’ll usually fare better with silent patience. Playing hard-to-get drives lovesick toms crazy, and brings them in close for a shot.

Calling in gobblers is a heart-pounding, life-enriching experience, even if it doesn’t always deliver a turkey dinner. Communicating with a wild turkey and watching it go about its life beats any nature show or trip to the zoo.

You can find the turkey calls discussed in this article, as well as local turkey-hunting knowledge, at nearby archery shops. Find a shop in your area by clicking here.

By: Scott Einsmann of Bowhunting360.com