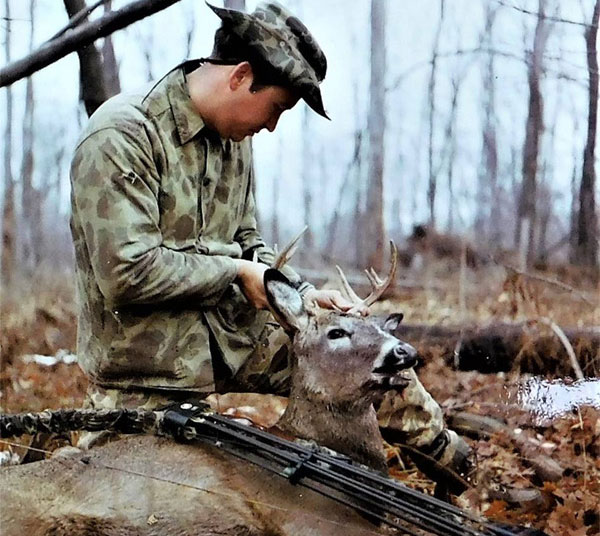 “Hunting with the bow and arrow is truly hunting the hard way.”

IN THE INTRODUCTION to his classic 1953 bowhunting book, legendary archer Howard Hill observed that the modern rifle and ammunition had made hunting so deadly that the average sportsmen of that day needed to know very little about “stalking and woodlore.” Conversely, acknowledging that the hunting bow is “deadly at close range,” Hill expressed his belief that most any serious archer can learn to shoot well enough to kill game but still needs the ability to get within good bow range – and that takes patience, dedication, practice aplenty, and firsthand experience. Sadly, these key elements are often lacking in many individuals living this impatient, fast-paced, and success-oriented 21st century world.

Admittedly, Hill was not “average” in any sense of the word. A strong, determined, and gifted athlete, he earned varsity collegiate letters in football, basketball, and baseball. His long love affair with archery started when he began shooting a bow at age four in his native Alabama. Among his latter notable bow and arrow accomplishments was winning 196 straight field archery tournaments without a loss and seven years spent as the reigning National Archery Flight Champion.

Did I mention his strength? Hill once pulled a 172-pound bow to full draw, a feat documented in the Encyclopedia Britannica. One of the most accurate instinctive archers to ever release an arrow, he reportedly bagged more than 3,000 game animals on his worldwide hunting adventures. His trick shooting performances and public archery skill exhibitions – many filmed for posterity – continue to amaze generations years after his death in 1975.

AS A BOWHUNTER FOR SOME SIX DECADES, I cannot help but wonder what Howard Hill would say about modern day bowhunters and the equipment they use. Would he compare today’s compounds and crossbows, broadhead-tipped arrows and bolts, with the “modern day rifle and ammunition” he blamed for an equipment-dependent generation of hunters long on technology but short on hunting/stalking skills and woodlore? Would he fret over the fact that some of today’s bowhunters are opportunistic deer shooters, rather than deer hunters who take pride in the challenge of learning how to spot-and-stalk wary animals instead of sitting and shooting deer that venture past their tree or blind?

It was Howard Hill who once said, “I know of no better measure for game conservation than the use of a bow as a weapon in hunting.” Many of us who began bowhunting in the 1950s and 1960s understand and appreciate Hill’s words. Bowhunting was much harder than hunting with firearms, much more of a challenge. Even in the early 1970s. when comparatively primitive compound bows began to gain favor with some archers, the nationwide success rate for archery deer hunters was maybe 3 to 5 percent.

The degree of difficulty between archery tackle and firearms helped sell state fish and game departments on the idea of establishing archery only seasons, with more time set aside to hunt with a bow because of the weapon’s low-impact effect on game animal numbers. We can thank men like Roy Case, who worked long and hard to establish a bow-only deer season in his native Wisconsin in 1934, and Glenn St. Charles who did the same for archery hunters in the Pacific Northwest. St. Charles joined with Washington State bowhunters, led by Kore Duryee, to establish a season for archery-only hunters in 1938 and later re-establish the bow season after it had been halted by the state’s Game Commission. In 1961, he founded the Pope and Young Club to prove the effectiveness of archery tackle for hunting North America’s big game animals.

The end result of hard work by those pioneers of bowhunting has benefitted the millions of hunters who’ve followed in their boot tracks. The popularity of Fred Bear, Ben Pearson, Jim Dougherty and other legendary 20th Century bowmen attracted untold numbers of men and women to hunting with the bow and arrow. My own Bowhunter Magazine, and other popular archery publications, helped fuel the fire burning in the hearts of hunters picking up bows and arrows in record numbers while the archery/bowhunting industry thrived.

At the peak of its popularity in latter part of the 20th Century, Bowhunter had a paid circulation of about 225,000 and overall readership approaching half a million. But this growth brought with it problems that have gotten worse over the past decade. And much of the growing pains can be traced directly to H. W. Allen’s 1967 patent for the first compound bow.

NO ONE I KNOW DISPUTES THE FACT that shooting a compound bow is easier than shooting a self-bow, recurve, or longbow. As Bowhunter Magazine Editor, I field-tested a Jennings compound in order to report to readers my thoughts of the new wheeled bows. I later wrote: “During a two-week 1972 late summer bowhunt in Colorado and Utah, I killed three muley bucks and summed up the bow’s performance thusly: As a hunting bow, it is an amazingly fast, flat-shooting weapon. A compound bow also may be the ugliest bow ever devised.”

Neither will many people dispute the fact that bowhunting success rates have climbed steadily since the advent of the compound bow. While instinctive shooting and countless hours of practice were once the norm for becoming and remaining proficient with recurves and longbows, the compound bow – typically equipped with sights shot with a release – could be quickly “dialed in” before opening day and shooting skills kept sharp by launching a few practice arrows before heading to the deer woods.

This meant that Howard Hill’s personal observation that hunting bows were “no better measure for measure for game conservation” was no longer true. In fact, bowhunters routinely fill their deer tags, often with multiple animals and account for a growing portion of the overall harvest in many states.

Don’t believe for an instant this has gone unnoticed by hunting critics and some fellow hunters. They typically complain about the comparatively long bow seasons and note its adverse impact on the state’s deer population. Even worse, in states and certain hunting areas where deer harvests are notably falling and complaints are rising about the number of animals seen, pressure builds for cutbacks in season length and bag limits.

Adding to these and other problems facing hunting archers is the recent trend to legalize crossbows during archery seasons. In my home state of Indiana, for example, not only were crossbows recently okayed for use in archery season but the state legislature also went against the recommendations of hunters and the Department of Natural Resources and included certain high caliber rifles for use by Hoosier deer hunters. The result has been predictable. Lots of deer hunters report deer numbers dropping in favorite hunting areas while in high density deer areas more kills are being registered.

In next month’s column I’ll more closely examine the impact that legalizing crossbows is having on archery seasons and overall deer harvests. Is the archery tradition of “hunting the hard way” dying or is it already dead? Read on, think about it, and then decide for yourself.

Venison: From Field To Dinner Table

Outdoors Allie: It's On For Osceola Turkeys

Sydney Loves The Sport Of Archery