So You Found A Fawn! Now What? 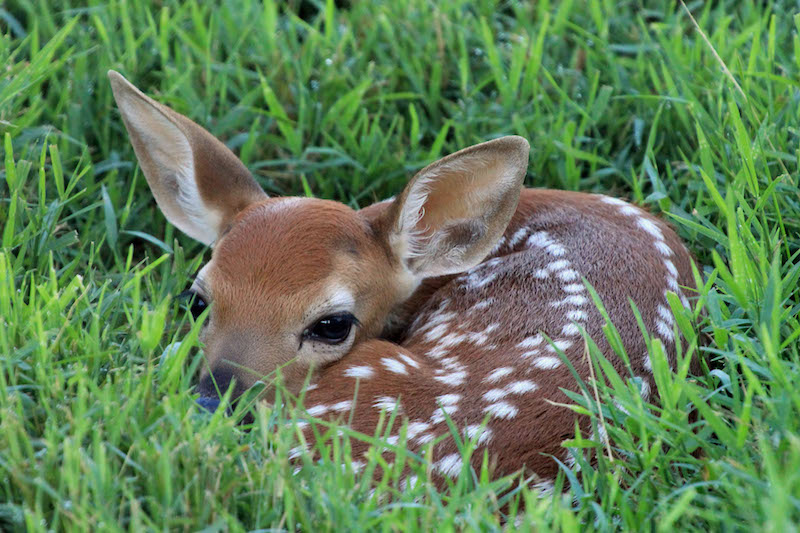 By: Cassie Scott of Bowhunting360.com

March 20 is the first day of spring. It signals April showers … and baby deer, aka fawns.

Many people spot fawns lying alone in pine thickets, patches of tall grass, or among the leaves in woodlands and backyards from May through early June. Although fawns might appear abandoned, they rarely are, said Hannah Schauer, communications and education coordinator for the Michigan Department of Natural Resources.

“A newborn fawn’s best defense against predators is for the mother to hide or cache it somewhere during its first few weeks of life,” Schauer said. “It’s completely natural for a fawn to be left unattended several hours. That’s actually the safest place for it.”

Fawns are born with little scent and rusty-red hair with white spots for camouflage. These features help fawns survive until they’re fast and strong enough to flee predators and keep up with their mothers. During a fawn’s first few weeks, the doe usually moves off a short distance and returns to nurse a few times daily.

Leave sleeping deer alone. If you touch them, your human scent will linger and could attract predators. Photo Credit: WDFW

And like most newborns, fawns require lots of sleep, which means lots of quiet, uninterrupted time alone. If you see a fawn curled up by itself, don’t fret. Fawns instinctively lie motionless when approached.

So, what should you do? Stay away and admire them. Getting too close can spook a fawn from its hideout, which endangers its life. Never touch or handle fawns because you’ll leave your scent on the creature, which might attract bears or coyotes. Just snap a picture and move on.

If you see a deer in distress, call the proper resources. Do not try to save it yourself. Photo Credit: Reddit

If you can’t find a nearby rehabilitation center, or it can’t accept more animals, resist the urge to “rescue” the fawn. In most states, it’s illegal to take in or care for wild animals without a state-certified permit. Only licensed rehabilitators, with certified training and facilities, can possess injured or abandoned wildlife. These laws protect people and keep wildlife wild.

“Fawns might seem cute, adorable and harmless, but they can grow up to be large, aggressive animals,” Schauer said. “They might also carry parasites or diseases that can jump to pets or people. We don’t want to see someone get sick or injured.”

Nature is harsh and indifferent, and reality dictates that not every animal survives to adulthood.

“Nature must take its course,” Schauer said. “As hard as that is for us to watch and see, it’s part of the natural lifecycle. Animals that don’t make it to adulthood are probably feeding other animals that have babies to take care of.”