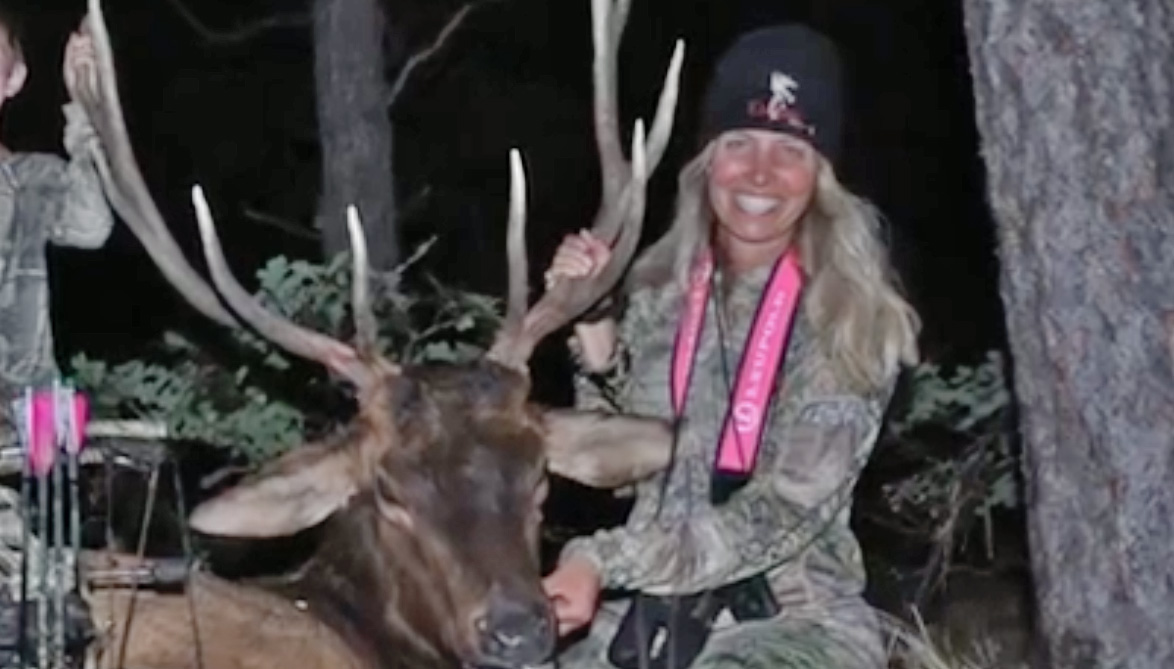 FA: Michele, first question, where were you born and raised?

I was born in New York City and raised in Florida and New York. We always spent the winter/spring in Florida and the summer/fall in NY (through hunting season of course)

FA: Describe a bit about your life growing up.

I had a wonderful childhood. I was a tomboy so I would spend a lot of time outside. In NY we had chickens, horses and other farm animals for fun. My brother and I rode our horses or worked around the other animals. We would also shoot our recurves and practice whenever dad would be shooting his bow. Sometimes Dad would take us out into the woods and sit with us so we could see deer as they would come out to feed. We would also go along when he would cut wood or build permanent stands. In Florida, we lived right on the water and spent days waterskiing, fishing and snorkeling in our back yard.

FA: How old were you when you first had a bow in your hand and who put it there?

Of course my dad put it there and we have footage of my brother and I shooting when I was around 7 and he was 5. Basically for as long as I can remember.

Father & daughter in the field.

FA: I understand you were very competitive in the horse world. Tell us about this.

All through high school and college I rode hunters and jumpers and competed on a national level for over 10 years, until I quit in 1984 to start working at Muzzy when dad first started it. I graduated from Stetson University in 1982 with a finance degree and rode full time after that until 1984, at which time I worked at Muzzy fulltime. We had 3 employees when we started.

FA: Do you still ride?

My wedding present from my husband Fred was an appaloosa mare. We have pleasure horses and ride “western” only for fun now.

FA: When did you get bitten by the archery bug?

I don’t know the mark was on me for as long as I can remember. I hunted as a teenager, then worked at Muzzy , started a family and in the mid 90’s finally had the time and opportunities to do a lot more hunting than ever before.

FA: Everyone who has been involved in archery for very long is familiar with your father, John Mussachia. What a tremendous story there. The Pope & Young story, the restaurateur story and of course the Muzzy story. Can you tell us a little on each? First, his involvement with P&Y and bowhunting.

My dad became a senior member of P & Y in the late 1960’s. He was a consummate outdoorsman. I am proud to say he was the real deal. A hard hunter, who respected the animals he hunted and would pitch in and help with whatever the situation required.

I went to this year’s Pope and Young meeting and had not been to one since the early 80’s. Interestingly, the changes they are proposing now and finally getting done are the same changes my dad proposed in speeches to the regular and senior membership over 20 years ago. My dad was a very successful entrepreneur. He owned several restaurants in New York in the 50’s, 60’s and 70’s. Serving as many as 6000 people a day when he retired in the mid 70’s. He then set about trying to make a better broadhead after he had some failures in Africa with a “state of the art” at the time head he used on cape buffalo. Muzzy is the result of that effort.

FA: You were a clerk there originally, right?

Yes, I hand typed all sales orders and invoices and did all the filing and answered the phone. A lady named Shirley Bonamie who was Fred Bear’s personal secretary for years in Grayling and in Gainesville, came to work for us when Muzzy first started and taught me alot about the day to day of business and how to handle customer service. All the things they don’t teach you in college.

FA: What was the origin and reason for your “Bad to the Bone” slogan?

Actually that was from our customers. Letters we received from them said your broadhead is “bad to the bone” and they would send pictures of the animals they had shot. We urged dad to let us start using the slogan. At first Dad being old school thought “bad” would not be a good thing to use for our slogan, until he saw a little kid at a bowhunting show wearing a shirt that said bad to the bone. He said “I get it now, ok we can use it” and the rest is history

FA: What was the original Muzzy broadhead? Was it accepted by the market?

The original Muzzy was essentially the same design only in heavier weights. The product has been refined and new technology has brought new and better materials and mfg processes. But essentially it is the same design. Accepted, slowly at first and then it exploded after about 5 years. The large ‘trocar’ tip was the biggest hurdle, but when people realized why it was there and how well it worked, word of mouth was like a freight train. So much so that now most companies have a similar ‘trocar’ tip on many of their heads. They say it’s the best form of flattery.

FA: Muzzy Products began as a family business. Is your mother and brother still active in the company? What’s your role today?

Today I am the CEO and have two wonderful team leaders, our COO Fred Settles and CFO Karen Patton that work with me almost daily, through phone and e-mails. The rest of our team is awesome and Muzzy has continued to grow each year for the past 23 years. We had our biggest month in our history this year and are on track for another record breaking year. My mother and brother are on the board of directors, but are not involved in the daily operations of the company.

FA: You lost your father a few years ago. I know it was a tremendous loss for your entire family as well as the industry. What do you consider his most precious gift to you?

Wow, so much. Probably, the way he treated people, his ethics and the love of the outdoors. Even if you didn’t agree with John Musacchia, you respected him. He was true to his word. His integrity was second to none.

FA: What one product really put Muzzy on the map?

Today Muzzy is one of the leaders in broadhead design and sales.

FA: How big is your facility now and how many folks do you employee?

FA: Who are some early and current big names endorsing your product?

Wow, we have been fortunate to work with Michael Waddell, Stan Potts, Greg Miller, Pat Reeves, Jesse and Ginger Morehead, Roger Raglin, Fred Eichler, Lee and Tiffany Lakosky, Randy Oitker, Tom Miranda and many others that have worked with us in the past and present.

FA: You recently married Fred Eichler. How did you two meet? I enjoyed that story at Pope & Young. Can you share it with our visitors?

Fred and I will be married 4 years. We actually met in 1984, when Muzzy just started in Gainesville Florida. We had a 3000 sq ft building behind a bowling alley and Fred worked at the local archery shop behind the counter. Dad actually met him first as he would go down to the shop and talk bowhunting with the “guys”. I met him shortly there after and we have been great friends since then. We now have an amazing family and share the passion for bowhunting and the outdoors. He is the love of my life. We feel so blessed.

FA: So who gets the bigger game, you or Fred?

Fred, he is the best hunter I know. No one hunts harder or knows animals like he does. If it can be done he will get it done. He recently (August) completed the Super Slam with his recurve, harvesting all 28 big game species recognized by Pope and Young.

The Eichlers doing what they love.

FA: What has been your most rewarding accomplishment in life?

My children. They are three amazing boys. Just great kids. Jeb is 12, Seth is 9 and Trent will be 3 this month. I have an awesome family. Being a mom to these three boys is wonderful

Doing everything I want to do. Being a mom, and a wife to 4 great men, finding time to hunt, running Muzzy and working with my husband in our outfitting business, Fulldraw Outfitters and our video business and taking care of investment properties.

FA: What’s your biggest concern regarding the future of bowhunting?

Access and opportunity. We are losing bowhunters because good hunting land is becoming scarcer and families just finding the time in their busy schedules to enjoy the outdoors.

John hunted with his favorite longbow.

FA: Any advice to help us get more young people to shut off the video games, computers and TV and get outdoors?

This is where parents have to take control. In our house, 3 days a week there are no electronics. Tuesday, Thursday and Sunday, the TV, computers and video games are off limits.

FA: Besides Muzzy, what other aspects of Archery are you involved in?

I am on the board of the ATA (Archery Trade Association) A member of Pope and Young, and the ASL Cancer Fund, hunt for a cure for cancer.

FA: Do you have a favorite game animal to hunt and why?

Like my husband, whatever I am hunting at the time is my favorite.

FA: Your mother is one of my favorite folks in the archery industry. How’s she doing these days?

Awesome, she recently started shooting a bow and is doing great with it. I had hoped to get her an antelope this fall, but she will be hunting turkeys with her bow in the spring and I have no doubt she will be successful.

The next generation Muzzy takes her own Moose.

FA: You are proof that you don’t need heavy tackle to bowhunt. Can you tell our readers what you use to take big game such as elk and kudu?

Sure, I hope I help other hunters who are small like me know that they can do what I do. I recently shot a moose in the Yukon. All with the same set up. I usually shoot between 45 and 48 lbs. I use Axis arrows and Muzzy 75 grain.

FA: Ok, this is a ‘Dream hunt.’ It can be anywhere with anyone, living or not. Who’s around your campfire at this hunt & where does it take place?

At home, in Colorado with my husband and our boys. It doesn’t get any better than that!

We are all bowhunters and outdoorsmen. We need to respect each other and the animals we hunt. Set a good example to those just starting in our sport, whether they be old or young. Go to sleep at night knowing you are doing something for archery and bowhunting and pass it on!

Check out more reviews and additional information at muzzy.com.