Sydney Loves The Sport Of Archery 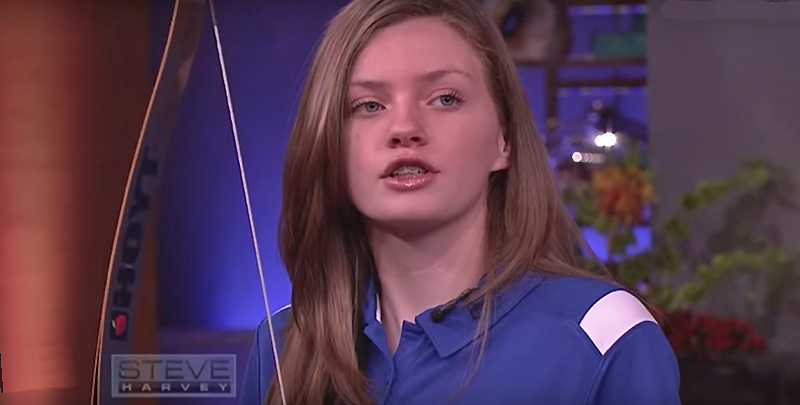 My name is Sydney Simmerman, and I’m a competitive archer from Hallsville, MO.

I’ve been competing nationally for about 4 years, but I’ve been shooting a bow for as long as I can remember.  My first bow was given to me by my dad when I was about 2 years old.  We shot at balloons out in the yard.  When I was about 6 he first took me to the bow range, and I haven’t looked back since.

I began my archery career shooting in the freestyle compound division.  Dad took me to a local tournaments throughout the year and I usually placed in the top 3, but after a bout of target panic I decided to switch over to shooting my bow with fingers.  Shooting with fingers relieved me of some of the stress from shooting with a release and I felt like I had a lot more control.  As a cub, I was shooting scores with fingers that could easily have competed with some of the freestyle shooters my age.  I set numerous records in the state of Missouri in the limited division and have both a national and world title under my belt, but it wasn’t until I competed in my  first outdoor national tournament at the JOAD/US Nationals in Ohio that I began to see Olympic style recurve was where the real action was, at least for me, and so at about 11 years old, I switched over, and this is when the real fun began.

I worked really hard that fall, and practiced with my family 2-3 days a week, sometimes more, for 3-4 hours each day.  I began to improve little by little and by spring of my 12th year I was ready to compete indoors for the JOAD/US Nationals titles.   Dad drove me to Ohio and I shot my heart out hoping it was enough to win.  When all the scores were finally tallied up I ended up in 1st place for both tournaments.  I couldn’t believe it!  My first year shooting recurve and I had just won a huge tournament!  That was all it took to confirm I had made the right decision to leave my compound behind, or at least for hunting purposes only, which I love to do, by the way.

I shot and practiced several times a week, both indoor and outdoor.  We went to as many tournaments as possible and I always did well, especially in my home state.  Nationally, the  year I turned 13 didn’t have the same results as the previous year, but I was still having the time of my life. I was asked to be a guest on the Steve Harvey Show in Chicago, IL;  he wanted to learn the sport of archery.  My family & I drove to Chicago and stayed in a super nice hotel.  We spent some time practicing before the show started taping so I could site in, but I didn’t get to meet Mr. Harvey until the show started.

It was a lot of fun and Steve Harvey did pretty well, for someone who has never picked up a bow before.  I  was also asked to be a guest speaker for the Missouri Department of Conservation.  They were holding a beginners archery class for women and asked me to say a few words and help assist the shooters.  This was also a lot of fun.

This brings me to this year, I’m 14 and competition is as tough as ever!  I shot in the JOAD/US Nationals in Makato, MN.  I was able to place 2nd in JOAD and 5th for the US Nationals.   Then the family and I drove to Louisville, KY for the NFAA Indoor Nationals and this is where I managed to win my 2nd National title with the recurve.

Mom and dad didn’t tell me, but going into the 2nd day of the tournament I was in 3rd place with a 286 25X.  I felt good about my score, but I knew some of the top shooters from other tournaments were there and so was the winner of the JOAD Indoor tournament.  I knew going into the 2nd day I would have to be completely focused and be at the top of my game the whole day.  I somehow managed to shoot my personal best!  A 290 21X!  I ended the weekend with a 576 46X and couldn’t have been happier.  All my hard work really paid off.

I guess by now you can tell I really love the sport of archery!  It helps me in so many ways.  It helps me to develop discipline, stay strong physically and mentally, and it allows me to spend time with my family indoors and out.  I definitely can see this as something I will do for as long as I can and hopefully even compete in the Olympics some day.  That’s my goal anyway.

From the staff of Young Archer.com

Are you tired of the relentless negativity that seems to exist on social media and elsewhere? If you want to make the internet a better place for everybody, please consider sharing this story, as well as the others that can be found at The Young Archer magazine. We want to get the word out on these remarkable kids, their inspirational travels and experiences, and their extraordinary dreams.

This is where you can help. If you enjoyed this story, and you think others would as well, share this story to your favorite social media site. Let’s take a moment, and show the world that positive stories do in fact exist across the internet.

Sign up today to receive our FREE Digital Magazine of The Young Archer?every month!

A Trick For Stubborn Gobblers