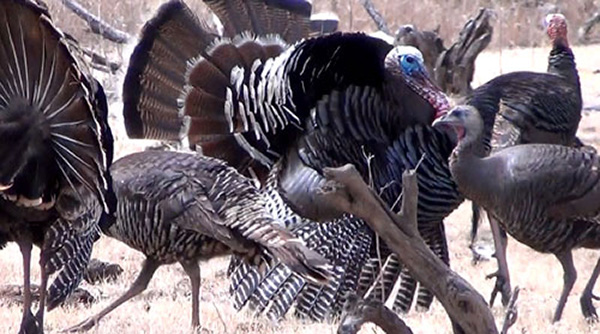 Fred Lutger and I were bowhunting for wild turkey gobblers in far west Texas. We set our double bull up in the dark, not knowing the lay of the land. At daylight we saw two hens walking in the trees 200 yards from us. An extra large bodied strutter was 50 yards behind them. Because of the big gobbler’s size we, of course, gave him the official status of a ‘Kent Daddy.’

Eventually, the hens meandered into our part of the woods, and at the same time a few other hens came up from behind us. Some were our right and some on the left. Kent Daddy was 60 yards away and had his almost 360 degree vision keeping track of where the action was.

The big longbeard picked up his pace to intercept two hens that were hurrying by him.

The hen in the lead got by him and Kent Daddy stepped it out in an effort to cut off the next hen.

As the hen got closer Kent Daddy slammed his wing feathers into the ground and blew up in a full strut.

But the hen wasn’t alone. A Jake was advancing quickly and he was definitely putting the pressure on her.

Kent Daddy sped up and then zipped in between them and cut the Jake off. The hen couldn’t take the pressure and flapped her wings and jumped forward.

And promptly took to the air to escape the attention of Kent Daddy and the Jake.

The Jake ran past Kent Daddy.

Now a few hens came on the scene from the left. Kent Daddy didn’t pay them any attention and he kept going.

Kent Daddy went right to a nearby strutter that had a big, round fan but a short beard. Kent Daddy side-stepped himself right into the other gobbler.

Wham! And shoved the big fan at least a yard.

A Jake and some more hens came right to the two big gobblers. It is important to note that these wild turkeys, Kent Daddy included, are finally within bow range.

In my side vision I saw Fred draw his bow to full draw. The turkeys were moving around and Fred didn’t have a clear shot yet.

As a hen approached them both Big Fan and Kent Daddy went toward her. They were too clumped up for a clear shot.

For an instant Kent Daddy stepped backward and looked around. For the first time he was in the clear. I didn’t look at Fred but I knew he would be shooting now.

Fred’s arrow hit and stuck in the dirt behind the Kent Daddy gobbler … without him realizing he had been shot at. (You can see the arrow as it hit the ground in the bottom right of the picture.)

One second after the arrow hit Kent Daddy decided to get outta Dodge. Once again, you can see the arrow and the dust it is creating in the bottom right.

And Kent Daddy and every other wild turkey around us left the area.

Fred’s shot was low, Kent Daddy was untouched. A disappointment for sure. But we saw some unforgettable action this morning in the wild turkey woods in West Texas. And I got some memorable pictures too.