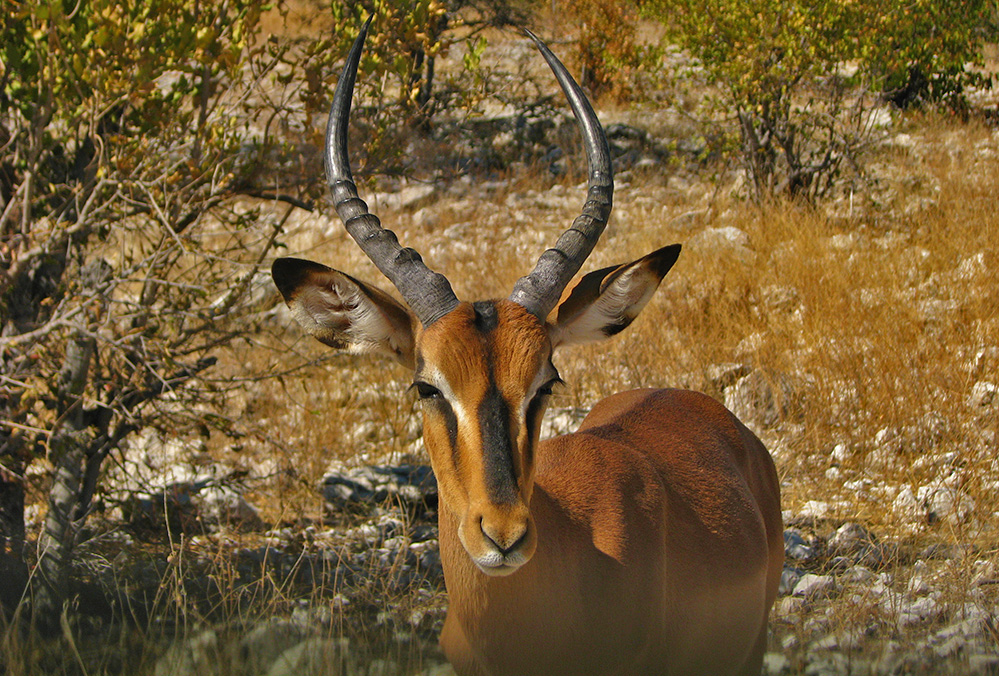 The northern reaches of South Africa are punishingly hot during the American winter, scorching the earth dry like a heartless blow dryer.

The heat crept under my skin like the oil of a habañero when you forget your gloves. I was alone in the little hut’s sunken structure, nearly 4 feet of my body submerged below the red dirt of the high veldt.

I swallowed, feeling the walls of my parched throat scratch together. I was the only creature near the waterhole not drinking.

A nearby warthog sunk its lips deep into the pool and gave sighs of pleasure as the water filled its mouth. Unfortunately the wind was blowing directly over me toward its flaring nostrils, but I’d made my own fortune that morning as I scrubbed with Atsko Sport Wash Hair and Body Soap and doused my clothing with N-O-Dor powder. It was working; over 14 warthogs had been by before 9 AM. Each one had a chance to smell me, yet none had succeeded.

I looked down at my empty water bottle, then back up at the warthog feeling a little jealous. “I’m tempted to see what you taste like…” I cut off my whispered words as it raised its head tilting it side to side. I guess their hearing is not so bad either; sadly there wasn’t a pill for my impatience.

My hands caressed the safety on my crossbow as I peered through the slit in the wall careful not to let the sun’s rays reveal my presence. “Surrounded by hogs when you’re looking for an Impala, just my luck,” I whispered, wishing the warthogs would just hear something odd coming from the oddly square stone that sometimes smelled like the funny creatures that rode on the hairless shiny ones. Creaking like the shells of beetles as they growled angrily on their well beaten paths without acknowledging their hairy brothers, vehicles must be a queer thing for the animals of Africa. You would often be driving and the poor ignorant birds would find out too late that you were cruising at a speed they could not match.

My mind wandered a little more as I watched the warthogs play by the water. I captured some footage then turned off the camera to conserve battery. The cacophonies of birds were quieting their mad orchestra as the sun rose higher in the sky. Eventually, even the warthogs decided they had sucked up all the water they could. I watch them as their bloated bellies sloshed to and fro balanced precariously on their little legs. The last of them slipped deeper into the bush and was gone.

It’s incredible! Every animal I have seen in Africa can disappear completely in the right environment.

Thankfully, my scent was still well under control despite the sweat pouring off of my body. For almost as soon as the little herd of warthogs left I saw an Impala.

Now when I say see… What I mean is that as I was scanning the underbrush when an ear, like a tawny leaf, rotated sideways revealing a small piece of my prey. This proves, in fact, that many things wait their turn for the water.

My heart began to race as I paced my breathing. If I got tunnel vision now, it most likely would lead me into a mistake that might reveal my presence.

I looked down and rotated the crossbow to make certain nothing was in the way of the string and the bolts contact point. Everything was fine, and rather well waxed. I tried to relax, not wanting to use my strength tensing my body. I focused on my stomach, letting it go. This waiting game was nothing like spotting and stalking. All the racing was in my mind, but my body could still feel the pressure of adrenaline. And I had nowhere to put it!

I tried to will-a-way the tremors in my hands by relaxing my shoulders and breathing deeply. It helped a little bit as I began to count the seconds, which also steadied my hands.

The tremors were nearly gone when an impala buck strode in from dense brush on the left.

I slipped the safety off, feeling a new wave of adrenaline. The Impala was focused on the water with its eyes, but its ears scanned all around for any hint of danger. Its muscles glistened under its short ruddy fur like a race horse tensing for the gun at the Kentucky Derby.

As slow as rising dust I lifted the metal frame of the crossbow to my eye, the image of the Impala jumped closer as I sighted him behind the crosshairs. I could see the beating of my heart in the vibrations of the lens. I gritted my teeth with annoyance and started tensing and relaxing my muscles to work the adrenaline out of them.

I can count the rings of its horns as it cocked its head left and right and then stood at the waterhole not giving me a shot.

The adrenaline was almost worked out of my muscles, but I kept going, not wanting any faulty aiming on my part. I willed myself to keep it up, tensing and relaxing then tensing again. This began to wear on my body and didn’t give me any relief from the agony of the heat as I baked in the buried box. Every so often the hint of a breeze would swirl the dust into a corkscrew, always leaving me disappointed as I felt nothing on my drenched skin.

Another two Impala hesitantly stepped from the bushes. They were both positioned to look directly into my hiding spot.

I quit breathing instinctively, and then rolled my eyes, knowing it was no use. I simply had to stay out of any of the light that angled through the vertical slit between the stones. I peered at them like a medieval archer in his castle, except that I peered up at them because my head was at ground level. The first Impala buck was offering me a shot but the other two impala were watching like a knight and a queen on the chess table.

We waited. Seconds passed as I focused intensely, my shallow breathing fluttering my lungs just enough to keep me from spasms as I watched carefully, rehearsing the next phase of our encounter. The slender beasts were buying it, seeming to become more relaxed as they kept their tried-and-true routine.

Amazingly, their noses were not detecting me at dirt level, 35 feet in front of the water.
One of them broke routine and walked away as the graceful Impala buck slurped away at its refreshments.

Kicking a sequence of events into gear, I leaned forward. The metal of my mechanical broadhead glistened like an unsheathed sword as I clicked the scope on and placed my eye upon the image of the Impala. Recalling the anatomy of this warm weather creature, I traced up its leg and aimed a little more forward than I was used to. All the inner workings of African ungulates are placed in a much smaller and forward area then its North American counterparts. My finger then rested on the metal trigger, enjoying its coolness for a split second as I took aim.

The creature closed its eyes in bliss and took one last draw from the pool of water. I breathed out, and squeezed. In slow-motion my bolt hissed from the ground like a focused hornet. It slid through each foot of hot air on a direct course for a heart and lung collision.

I kept aiming; feeling that the bolt had been released because my father taught me that the best aimed shot can be sabotaged by a quick drop to look after your shot. So I steadied myself staring through the scope’s red dot. In a blink, the bolt flew right through the center of that red dot! The Impala, whose time had come, flinched and looked around frightened by the sudden hooting and hollering that came from the strange rock. It decided to leave with its kin. After 40 feet, its last step had come.

“Yeaaaa!” My small party only lasted for a few seconds. I then decided it was time to exit the little oven. After getting my bearings and filling my lungs with fresh air, I picked up the walkie, “Ben, Ben… Calling Ben!”

The keen tracker picked up almost immediately, saying my name with a peculiar curve at the end, “Rreeeed, Rreeeed… Have we got him?”

“Yes Ben, I will go to him now.” I peered over the top of the walkie-talkie into the bush. The Impala buck had come to rest by a new anthill.

The radio biped, “You will like the Impala steaks! They are very good!” I could feel Ben’s smile in his excited tone, it chimed with his native accent.

“I believe you,” I stated walking toward the prize. “You will have to show me your favorite spices for this meat.”

Dear reader, hunting in South Africa with people that know what they’re doing and have great love for animals that breed on their lands is a treat any conservationist can enjoy.
I was often accompanied by trackers who live in the village that is taken care of by the landowners. For the men, women and children of these villages this bargain gives them more safety and options for education or a skilled trade than most of the country. Ranch villages are cared for by ranchers like they are family. Each ethnic group brings something to the table and the leadership of the ranchers teaches villagers conservation techniques that will benefit South African wildlife. Living, working and hunting alongside cultures that endeavored to save and grow the herds of Africa’s exquisite wildlife is a pleasure. The hunted game also finds its way to the bellies of hungry people in the villages by the grace of the rancher, this is normal in South Africa’s ranching systems.

Does this different world take some getting used to?

Well, every time I find myself in Africa I learn more and more about how folks of different culture groups and ethnic backgrounds can find common ground. If there is mutual respect, a wonderful magic can happen. If someone takes the time to lead with kindness good things can follow. We Are All… simply human, together.

How To Use The Gobblers Pecking Order