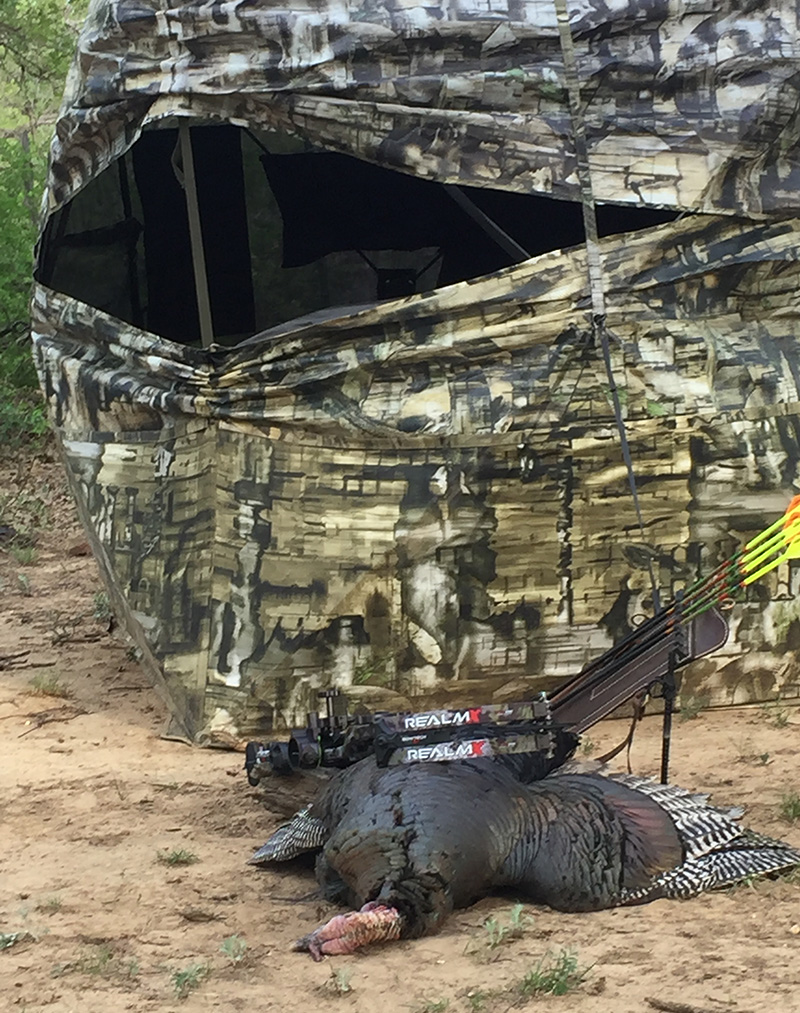 This Spring, I crossed paths with the coolest ground blind I’ve used in my 57 years of bowhunting.  That blind is the Primos Double Bull Surround View 360!  This ground blind works like a two-way mirror.  The hunter can see out 360 degrees, but the game you are hunting will never know you are in there! It is the first blind without a blind spot.

The Primos 360 utilizes a see-through fabric that allows complete visual awareness without the need to open windows.  Imagine, being able to see all around you while hunting and having no blind

Jason Harris who is a Senior Product Manager for Double Bull said the technology is the basis of a special tiny pinhole pattern, there are thousands of very small holes that dot the fabric.  On the outside of the blind the camo print and natural light force human and animal eyes to focus on the camo making the holes invisible.  On the inside, the black print and dark interior allow the hunters eyes to focus on the holes so you see through the fabric!  What a genius idea!

When I first saw the new Primos Double Bull 360 Surround View, I said, “this is a total game changer.”  The 360 comes with four one-way, see-through walls with one movable black out wall to place on any wall you choose for additional concealment.  The Surround view 360 measures 60×60 inches, is 70 inches tall, and weighs in and 23 pounds with the carry bag.

It also features a quality hub system: the support poles and joints are extremely strong and difficult to break.  The 360 is also made out of strong fabric and very tough and durable.  I feel it would be very difficult to tear. This is a quality product and extremely well made to last for years!  One evening I hunted in 35 MPH winds and the blind performed flawlessly.

Another cool feature is how easy the 360 sets up, I can literally pop it up in 45 seconds.  It is suggested to watch the video on setting up and taking down the blind. I’ve read reviews where some folks say it was hard to put up and more involved in taking down.  Believe me when I say it is simple!  Again, please watch the tutorial video below on set up as it will make it easier and less complicated while putting it up and taking it down in the field.

The other evening, I popped up my Primos 360 in a highly populated area on my ranch that holds a lot of Wild Turkeys.  The temperature was 94 degrees and hot.  I stayed relatively cool while the wind blew through the mesh netting, another advantage of this blind!

It was pretty windy so every time the wind calmed down, I used my Woodhaven box call to let out a couple of loud yelps. After some time passed I noticed  movement off to the right of my decoys.

Here came a fast approaching big Tom Wild Turkey!  I was prepared for the shot and I leveled the strutting gobbler when he got in my shooting lane.  Being able to see in a 360 circumference, I was able to be prepared before the Tom got in my shooting lane.  In most blinds, because of the solid walls, I would not have been able to see the fast approaching Tom.  The PRIMOS 360 DOUBLE BULL performed!

Myself and all of us here at Bowhunting.net give the Primos 360 a 5 out of 5 stars.  As I mentioned earlier, it is the coolest ground blind I have ever seen!  Go to www.primos.com

I would also like to take a second and thank Bowtech Archery, Grim Reaper Broadheads, and Black Eagle arrows for always giving me great tools to work with while on my bowhunting endeavors.  These companies make great products that work!!