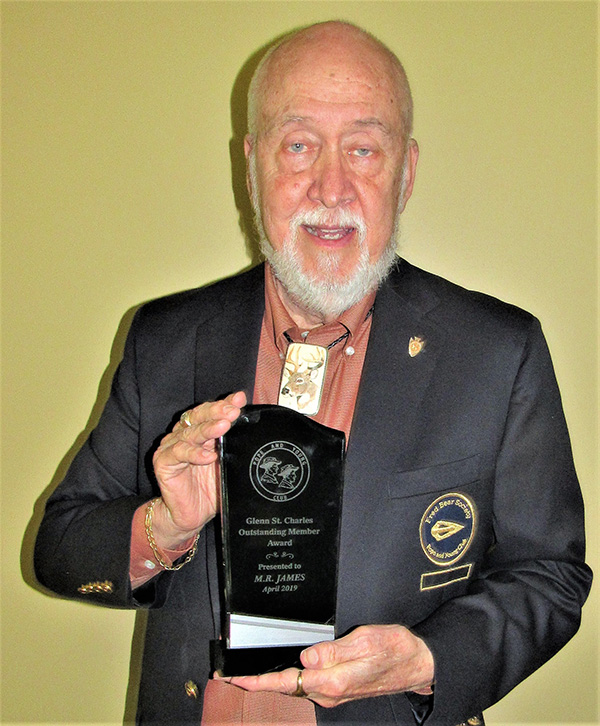 Chatfield, MN – During the recent Pope and Young convention held in Omaha, Nebraska, M.R. James was presented with the inaugural “Glenn St. Charles Outstanding Member Award.” Since 1971, M.R. has worked tirelessly promoting the Pope and Young Club and encouraging bowhunters to get involved. M.R. has supported the Club with his time, countless donations and has worked tirelessly to educate the bowhunting public about the Club’s history and the important role the Club plays in the protection of our bowhunting heritage.

As a staunch supporter of fair-chase bowhunting, M.R. has devoted his life to these efforts. This is a very prestigious award and it is fitting that M.R. is the inaugural recipient.

“Receiving this award was truly humbling and special,” said M.R. James. “Since joining the Pope and Young Club in 1971, I’ve supported the organization as a member, official measurer, Director, First Vice President, and President, doing what I could to promote and assist it in all ways possible. Its Founder, Glenn St. Charles, was a friend, mentor, and inspiration to me. Having this award, which bears his name, presented to me in front of my peers was an unforgettable moment I’ll always treasure as I continue to do what I can to assist the Pope and Young Club.”

The Pope and Young Club is a non-profit North American conservation and bowhunting organization dedicated to the promotion and protection of bowhunting by striving to increase awareness and appreciation of bowhunting foundations, principles and values.

The Pope and Young Club is focused on Fair Chase hunting ethics that support the ethical pursuit of free ranging, wild game animals without unfair advantage while promoting the conservation of both habitat and wildlife. The Club also maintains the universally recognized repository of records and statistics on North American big game animals harvested with a bow and arrow.

Journey of a New Hunter | Activate The Hunt Podcast

Journey of a New Hunter | Activate The Hunt Podcast

What You Should Know Before Hunting with a Bow