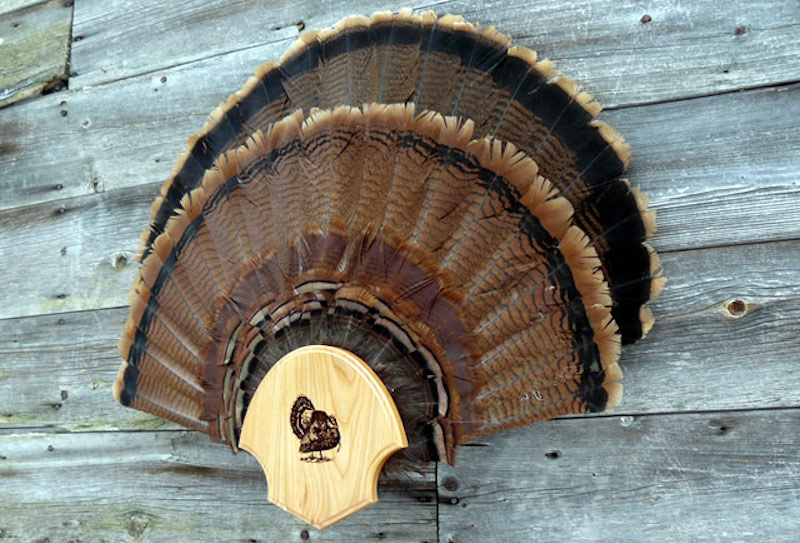 You don’t have to be a professional taxidermist to preserve a wild turkey’s fan. You can mount those tailfeathers quickly and easily with materials you probably already own.

But before worrying about your fan mount, take care of the meat. Your priorities are butchering the bird and cooling its meat. Besides, a turkey fan has only a small patch of flesh that can spoil.

Once the tail is clean, flip the fan so its back faces up, and then cut off the flesh and smaller feathers behind the tailfeathers. Leave most of the smaller, covert feathers on the fan’s front side. However, feel free to pluck any of those feathers to make the mount look symmetrical.

With a pair of scissors, cut the tailbone from the fleshy area on the front and back of the fan.

With a sharp knife or scalpel, remove excess flesh at the base of the fan on the front and back. Be sure to remove the oil gland, which is on the front of the fan in the center of the flesh.

Using your knife or scalpel, cut the flesh in between the base of each quill, separating them from each other. Clean any easily accessible flesh you see there. Then, with a wire brush, scrape the fat and flesh, brushing toward the tail’s base. Repeat this step on the front and back until most of the fat and flesh are removed.

Once the flesh and fat are mostly removed, coat the fleshy areas with borax, working it into all fleshy areas. The borax dries up the grease and deters insects.

Lay the fan out flat on a piece of cardboard to dry. Photo Credit: Hunters Specialties

Now, lay the fan on a piece of cardboard. Fan the feathers into the desired shape and use pins to stake the fan into position. Once the fan is spread out the way you want, set it aside to dry for a week or two.

You can use auto body filler to speed up the process. Photo Credit: Hunters Specialties

A faster path to the same results is to use auto-body filler. Lay out the fan how you want it, and pin it into place as described above. Now, mix up some body filler and apply it to the base of the quills where the flesh was. Body filler sets up in minutes (see the manufacturer’s instructions), which saves lots of time.

Once the fan is dried in place, mount it to a commercially produced fan plaque, following the manufacturer’s instructions.

You can create another layer and add the beard to your mount. Photo Credit: Hunters Specialties

You can also add your turkey’s beard to the mount. Gather the beard in your hand and cut it from the breast near the base, leaving some skin connected to the beard’s base.

Scrape off the flesh with a knife or scalpel.

Coat the flesh with borax, work it into the flesh, and let it dry.

Add the beard to the fan mount.

Tags: how to mount your wild turkey fan
Previous Post

Cover For Deer, Where You Want It

What Is A Bear Hunter?