How 3D Archery Makes You A Better Bowhunter 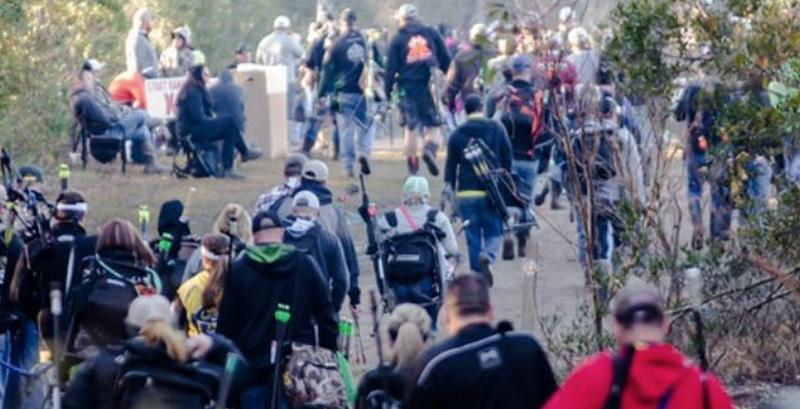 By Jackie Holbrook from Bowhunting360

Your shooting partners wait silently as you prepare to shoot at the white-tailed deer that is is broadside at 35 yards. When you reach full draw your heart rate increases. The pressure mounts as you prepare to release the arrow. You check your shot process and settle your nerves. You squeeze the trigger and watch the arrow on the way to its mark.

From behind you, someone says “Nice shot!”.

Your arrow punched the 3D deer target’s center ring. You were the last in your group to shoot, and so you walk to the target with your tournament partners to score and pull arrows. You “killed” the deer and next you’ll face off with the target named Sasquatch!

Shooting in a different environment will get you out of any rut and shake up your routine. Photo Credit: ATA

“A change in environment makes you feel the pressure,” said Nick French, director of national sales at Outtech Inc. French competed several years in Archery Shooters Association tournaments, and still shoots in local events. “Shooting in the backyard is where you’re comfortable. At a tournament with people watching, you’re amped up.”

Bowhunting also jolts you from your comfort zone. Some bowhunters remain calm and collected, but most endure emotions ranging from excitement to knee-shaking nervousness. Practicing at your usual range differs greatly from shooting with outside pressures at play. Competition replicates some of those feelings, because many archers feel nervous shooting in front of others. New environments can also prove distracting, forcing you to practice focusing.

French stresses that archers must stick with routines every time, much like golfers taking practice swings. “A good shot is about the execution,” he said. “It’s making everything comfortable to make the same shot every time.”

Mastering archery techniques means following shooting steps. That can be easy at home, but when you’re staring down big game, “buck fever” can send your arrow flying wide or high of where you aimed. Tournament stress can also cause errant shots, but those real-life pressures let you practice your shooting process. But at least a target face or 3D target won’t move.

“The best shot I ever had on a deer, I didn’t think,” French said. “I was so in the rhythm of my process, and I got that rhythm from practicing for tournaments.”

Most competitions have you shoot at animal targets that mimic what you would see in the wild with a few variations sprinkled in. Photo Credit: Archery Shooters Association Instagram

Any competition provides good practice, but 3D tournaments are most popular with bowhunters because they simulate hunting. They often require shooting from kneeling positions or elevated platforms, and aiming at the vitals of popular game animals.

“Practicing on 3D animals brings it all together,” French said. “I think it’s important to shoot at realistic targets. My son and I are going to put together Rinehart’s new elk target for my elk hunt, and I bought a big buck target to practice for Iowa.”

You wouldn’t go bowhunting without shooting your bow, right? Why stop there? Too many hunters go afield without testing their boots, outerwear and other gear. Check the event’s dress code. If it lets you wear hunting gear, take advantage of the learning opportunity. After walking the course in your new boots, you’ll know if they’re comfortable. You can also learn if your clothing stays quiet while drawing, aiming and shooting.

Shooting at pre-determined distances that may vary from what you normally shoot will test your skills. Photo Credit: Hedge Post Media Youtube

Depending on the competition you enter, you’ll compete on marked and unmarked courses. Some events let you use a rangefinder while others force you to rely on your eyes.

“Yardage is where I beat people,” French said. “I would know the yardage, and that carried me through competition. French shoots unmarked courses and constantly studies distances. “I would walk around the yard and practice with the rangefinder,” French said. “That gave me a real understanding of depth and distance.”

Practicing at different distances is important, whether you use your rangefinder or because the distances are marked. A deer might stop at exactly 20 yards, or hang up at 33 yards. Shooting at varying distances helps you practice where to aim.

If you’re ready to shoot competitively, visit an archery shop and ask about events near you.

NASP Changed My Life For The Better