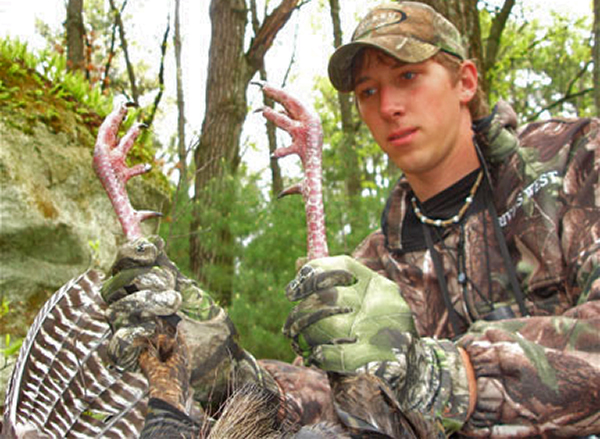 When I began the 2006 Midwest spring turkey season trek, little did I know that that year would be like no other!

The second week of the Wisconsin spring turkey season my cameraman and I sat patiently awaiting the arrival of…wait-wait-wait!!!

“Hold On lets not get carried away, before we jump to conclusions I want to take you back well before the season even opened.”

As my cameraman situated his equipment under the cover of darkness in our Double Bull ground blind we heard two gobblers roar out less than 100 yards from our location. I had waited for this day throughout the year and it was finally here

As my cameraman situated his equipment under the cover of darkness in our Double Bull ground blind we heard two gobblers roar out less than 100 yards from our location. I had waited for this day throughout the year and it was finally here

Like I was saying, before we even think about talking about the hunt there are too many other aspects when it comes down to it!

Weeks before the season even opened scouting new territory was on the agenda, since the previous year, wild turkeys seemed to vanish from the area they had called home for years …what happened, and where did they go?

Wild Turkey hunters used to venture a-field and hear gobbles in virtually any direction and decide which gobbler to work within range, by calling them into a positioned set-up. Things really changed the past few years; not only in the Midwest, but also across the country you’ll hear about frustrated hunters complaining how the ol’ gobbler eluded his perfect set-up.

I can recall the most common used phrase by wild turkey hunters…”The one that got away!” Today it’s, “What happened to all the wild turkeys?” The birds are still around, it’s just they’ve adapted much more to us turkey hunters.

One month of solid turkey hunting this past spring proved to be the most challenging yet. Calling gobblers into range was the most difficult aspect, remember we’re not running and gunning. With a bow in hand and a cameraman filming, we were looking for some exciting footage to present.

So after locating new and promising ground to turkey hunt for the spring season we had several set-ups ready. With everything in place and video equipment ready for action it we hit the 3-D range for some fine-tuning on my archery equipment.

That spring I was thrilled to pick up the VENOM Peep Sight by Scorpyon Technologie. In previous years of hunting out of a ground blind with a bow we had to pass up dozens of shooting opportunities, why? When I’d come to full draw and look through my peep sight I could not see anything due to the fact that most peeps are  black and don’t gather the light that bowhunters need for early morning and late afternoon low light shooting conditions.

“The VENOM Peep is manufactured in Horizon Blue” because it is “Optically Eutropic”, or “Light Gathering”. It is also virtually the same color as the atmosphere in pre-dawn and post-sundown light conditions, which are the optimum hunting periods. This color is easy on the eye but importantly, it allows the pupil to adjust more rapidly than standard Peeps in those critical seconds between the time the Peep is drawn to the eye, the target is acquired and the arrow released.”

With my bow in fine tune, my cameraman and I were ready to hit the woods and capture some footage for the 2006 season. Arriving to our location in Adams County Wisconsin we knew we would see and hear wild turkeys since we had pre-scouted this location. Even though we were in the heart of Wisconsin’s finest turkey hunting we still remembered that these birds were educated and avoided calling, especially yelps. If anything we would rely on soft seductive purrs and clucks to ease an ol’ gobbler within range.

As my cameraman situated his equipment under the cover of darkness in our Double Bull ground blind we heard two gobblers roar out less than 100 yards from our location. I had waited for this day throughout the year and it was finally here, I knew there was a good chance of getting a Muzzy in the air.

Nine jakes and three hens walked 3 yards in front of the blind, one gobbler held up just out of range. We had birds everywhere the next morning, but still, no gobbler to present me with a shot opportunity.

Relocating for another morning location I popped up the DB blind and situated my cameraman to my right. Sitting patiently like previous mornings a gobbler roared out and erupted from the woods like no other morning, soon followed by birds from each direction.

The woods lit up with action and some immature Jakes were first to the earth surface to present the turkey world that they were the dominant mature bosses in the turkey world. After  strutting their stuff in the spotlight trying to impress the ladies 35 feet from ground level, the true king of the woods had enough of these punks.

Sweeping down ever so calmly the king of the woods drifted only yards from the Jakes; it was then that he sealed the deal. With the Jakes shying away from the presence of the this ol’ gobbler my cameraman softly whispered that three other gobblers were making their way down the hill heading straight for the group of Jakes.

These three bosses who knew they owned the woods joined forces with the fourth gobbler (King) and settled issues in just over a minute, with the Jakes running for their lives up the steep hill.

During this time we had hens pitching down in every direction, we could not keep track of which bird was which. Keeping a close eye on the four studs in full strut they decided to split and group with their hens.

Just when I thought the fight was over we heard something from behind the blind getting closer, it was the same direction the Jakes had left. Just when I thought we would never see them Jakes again, they had returned on the run with re-enforcements.

They had picked up four other youngsters to join in, harassing the harlem of hens. Enough said, the gobblers had enough of this immature attitude and decided to ward of these Jakes for good. All four gobblers put up an end-all,  brutal fight; the Jakes had enough, learned a lesson and bolted the area in hopes of finding a group more tolerant to accept them.

With all the action starting to taper off, the King of the woods had picked his group of hens. They were heading directly toward our set-up, I mean they were close; I’d have to admit they caught us off guard. Coming to full-draw I looked through my VENOM Peep and was amazed at the amount of light it had picked up in the darkness of the blind. With the bird now at 9 yards I whispered to my cameraman, “READY?” he replied “Yes!”. As soon as I heard that positive word, my shaky finger met the presence of my Tru-Fire release and off my arrow sailed making a complete pass-though.

With my heart pounding I could not believe how perfect the morning had gone, not to mention all the action with the Jakes. High fives to my cameraman and cheers were let loose from the adrenaline that ran high.

Before we could get out of the blind my cameraman warned me that he might have not captured the shot on video. Shocked! Was the only word, I had to find out then and there, I feared of “breaking time code” on the DV tape but could wait no longer.

We reviewed the footage and it turned out beautiful, even though the lower half of the bird was not in view we had great footage. My cameraman explained that the bird was so close to the blind that he was limited since the tripod would not extend higher, the other aspect was when I said “Ready?” he thought to pull back…he never saw me draw my bow!

It was an exciting year with numerous kill shots, missed shots and just plain old fun running the camera. It was though, by far the toughest and most challenging year in the woods hunting spring turkeys. Though this hunt may sound like it was perfect or easy, let me assure you these types of hunts don’t come around everyday. Sometimes things go as planned, 98 % of the time they don’t.

What You Should Know Before Hunting with a Bow