Sawyer Really Ticks me OFF! 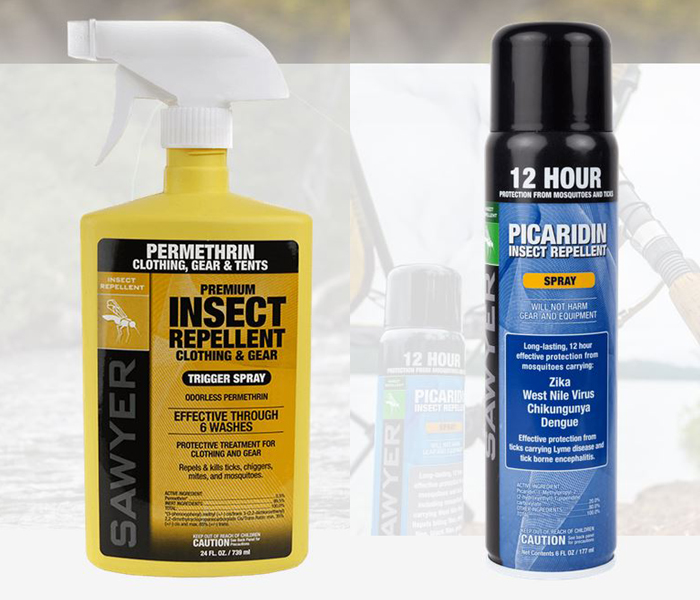 Winter always comes with its own problems if you find yourself spending time in the woods.  But when you put on something to protect you from the angry elements: the world of the wilds gets much better. Yet, the enjoyable temperatures of spring, summer and autumn can be even worse. Mosquitoes, ticks and all the other little biting, sucking menaces enjoy this weather far more than we do.  Warm and wet weather rings the dinner bell for these little pests and parasites.  But, a recent field test of the Sawyer ‘bug juice’ products has freed me from worry this year while wandering the woods.

Where I happen to live in Oregon, as in many places around the U.S. the logarithmic explosion of ticks in the woods has gone far beyond worrisome for everyone – not just those who get off the concrete and asphalt and enter the woods—even those walking on their lawns and gardens in the cities need to be acutely aware.

Just a little bite – no big deal?  Well, consider this list of tick borne diseases you can easily suffer from a single tick bite in areas of the United States: Anaplasmosis, Babesiosis, Borrelia Mayonl, Borreia miyaotol, Bourbon virus, Colorado tick fever, Ehrlichiosis, Heartland virus, Lyme disease, Powassan disease, Rickettsia parkeri rickettsiosis, Rocky Mountain spotted fever, Stari, Tickborne relapsing fever, Tularemia and 364D rickettsiosis—- Inside the guts of a tick and ready to spread to you when they bite.   Have I got your attention now?   All of thesewhen contracted are beyond horribly painful experiences; and many can also lead to your death.

And…what about those pesky mosquitoes?   Well, Zika, West Nile Virus, Dengue Fever, Chikunguya, Yellow Fever and Malaria… any of those maladies ring a bell?  Yep, we live in a world of hurt spread by mosquitoes if you don’t enter the wilds fully prepared.

In one single instance of my testing of the Sawyer products sent out to me was during an extended battle with installing fence to keep my cattle on the ranch.  I had sprayed my clothing down with their Permethrin product that can actually remain in the cloth for up to 6 washes, and my skin was treated with their 20% Picaridin spray.  At one point early the first day I sat down on the ground to rest in the grass: when my dog came up to sit by me I was a bit shocked at how many ticks she had collected.  In that one sitting I stopped counting the ticks I removed from her after the number reached 70!  Some were stuck to her skin and some were crawling around as they looked for a place to attach.  We had both been in the long grass and brush for the same length of time and both had entered the wooded pastures with no ticks on us.  I had NOT ONE SINGLE TICK ON ME!   When one tick fell from her and landed on my pants leg, it immediately went into a race to get off the fabric…and as I continued to watch it for several minutes it proceeded to die.  The neuro-receptors in the tick simply shut down.  Neither clothing nor skin that had been sprayed collected any ticks.  Over a two week period of constructing the fence, I experienced the same results with only one instance of contact when a single tick found its way behind my beard where I had neglected to apply any spray.  Mosquitoes would often make a pass at my skin, but immediately understood the fatality of their efforts and left my area.

In the past I have tried every solution and percentage of DEET products from yard and kid permissible solutions all the way to the ‘As far back in the woods as you can get’ sprays…and all of them either had a time failure or simply a failure to work fully and successfully against the sucking/biting invaders. And, with all the warnings regarding the DEET use, I never applied them without a question in the back of my mind that they may actually harm me.

In the Sawyer products the ingredient Permethrin is a synthesized version of a product of the Chrysanthemum flower of the pyrethroid family which acts like the natural extract of this flower family. Although the natural version of this chemical breaks down very quickly in sunlight, the synthetic version gives protection for a very long time when applied to clothing and will still be effective for up to 6 washings of these items.  Of high note is Permethrin has even been found to be safely used on pregnant women; however it is suggested not to be used by women nursing children or on infants until they are over two months old.  This chemical is also used in restaurants and other places that handle food.  A pretty good recommendation for a product that stops insects from endangering humans.

The Picaridin used in the on-skin spray is a synthetic that mocks the natural compound Piperine – derived from plants that produce black pepper. Long used in Australia and Europe since the 1980’s the U.S. medical bodies eventually certified it safe for us Yanks in 2005.  Effective on mosquitoes, ticks, fleas, chiggers, no-seeum’s, gnats  and biting flies as advertised, the Sawyer product certainly proved its effectiveness on any these who may have wished to dine at Café Frank! With 12 hour effectiveness, the Sawyer product was actually very effective and economical as reapplication was not required.

Sawyer’s long lasting Picaridin comes in both lotion and spray that can be applied directly to skin, clothing and equipment without harm to any of the synthetic materials or fishing lines.

Sawyer’s Permethrin products come in aerosol and pump spray to be applied to clothing, tents and other equipment and gear.   Of great note is that the U.S. government now treats every item of clothing issued to American Soldiers with Permethrin for insect protection of our troops.  “Good to Go Sir!”

For More please go to: Sawyer Insect Repellants. Products are available on-line and at major outdoor retailers including Walmart.

4 Ways Camping Prepares You For Danger

How To Master The "Bowhunting Mind Game"

Target Panic - I Got Cured.