Target Panic – I Got Cured. 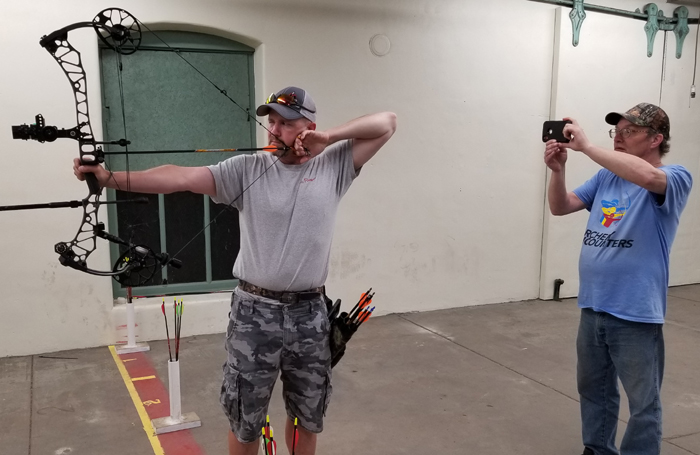 I have heard people talk about “Target Panic” before, and I have watched as others have struggled with this issue. I have never had any issues at all with “Target Panic!” That was until I noticed something was going on during my winter 3D league. With what was happening as I was shooting, it didn’t take me long to reach out for help.

A simple call to Tim Case, owner of Archery Encounters. LLC, and he diagnosed me with “Target Panic!” During our conversation, Tim tried to explain to me what was going on in my head. I knew I had issues but was it really that bad? Needing to finish 2 weeks of the league, I really had to bear down and suck it up until I could get together with Tim and work things out.

My last two weeks of the league were a real struggle. Even though the furthest target was only 40 yards and we were shooting inside, I could feel the anxiety on each shot. My mechanics felt fine, but I was all over the place. With each shot, I mentally fell into a deeper slump.

Finishing the league on top, in my class, didn’t help matters much. My scores were a little lower than the previous year, and I just didn’t feel as if I had any confidence at all. Meeting with Tim was going to open my eyes and help me fix the issue at hand, “Target Panic”.

When my schedule finally matched up with Tim’s, I headed to Archery Encounters. He had me complete some simple exercises. He watched as I struggled to get a solid shot off. Tim said, “We have to fix what is going on in your head!” He also reassured me that everyone at some point or another will struggle with this issue. That reassurance made it easier to start working on the drills Tim assigned me.

Probably the biggest issue I had to fix at this time was my mindset. Being so busy focusing on results I had pushed away looking at the importance of a positive mindset. This brought out huge flaws in my technique and form. Tim needed me to break things down and quit being so hard on myself. I was becoming my own worst enemy, and it was killing any fun I used to have. What can I say, I am a very competitive person, and I can’t handle not performing my best.

The first thing Tim wanted me to see was that I was ahead of the game, and I could focus on a few positive things I had going for me. With my bow in hand, Tim had me stand 5 yards away from the target. He had a quarter sized dot on the targets, and he wanted me to with the dot. I drew back and struggled to get the bow to sit. My heart raced and I was having a breakdown. I failed to hit the mark at 5 yards. Tim laughed and told me to do it again. This time he wanted me to do the following things:

This sounded so odd to me but who am I to argue. I was the one with “Target Panic” and he was the one with all of the Archery Coaching certificates. Clearing my head to focus on each step I was amazed that when the shot went off I was in the black dot! How in the world did that happen? Tim knew it was going to happen and he laughed while shaking his head. I pulled that BEA arrow out of the target and repeated the process again with the same result.

Over time I worked my way back to 20 yards with great success. Yet, at 20 yards with my eyes opened, I struggled horribly to get close to the black dot. Tim gave me a series of exercises to complete over the next few weeks, and I was confident I could get back to normal. I have 20 yards in my basement, and I can shoot after the kids go to bed. Tim wished me luck and I promised to send him weekly updates on my progression.

Tim’s directions for week 1 were for me to shoot at no further than 5 yards. I was to shoot 12-24 arrows per session. He didn’t want me to aim, just focus on the execution of the shot. Put the arrows all over the target without grouping them. I did this for two weeks before I moved on to exercise #2.

Exercise #2 built on the 1st exercise. For the next two weeks, I was to split the target in half and concentrate on keeping all the arrows on the same half of the target. I shoot the upper half first and then the lower half. Next, I would split the target in half left and right and do the same thing. The focus was not on aiming but executing the shot. As I finished up this two-week exercise I started to feel more confident.

Feeling good about my progression I moved on to the 3rd exercise. For this exercise, I needed to split my target into 4 quadrants. Tim wanted me to shoot 4 arrows into one quadrant without grouping them. Next, I would pull those arrows and shoot them into a different quadrant. I would repeat this until I shot all 4 arrows into each quadrant. Then I would do it all over again. During week 1 of this exercise, I shot at 5 yards and it felt great. With more confidence in my shot execution, I decided to move back to 10 yards for week 2. More confidence was gained, and I was ready for exercise #4.

The 4th exercise finally had me grouping arrows. Placing a 3-inch circle in each quadrant was the only change from the previous week. Carefully I aimed to keep the arrows in the circle. The shot execution was becoming easier with each arrow. For two weeks I methodically placed arrows in a 3-inch circle.

My mindset had improved, and my shot execution had really improved. I decided I was going to do one more exercise for two weeks. Using the quarter-sized black dots on my targets was the next challenge. Allowing myself one arrow per black dot was all I was going to do. Shooting at 10 yards this was a great exercise for me to focus on making each shot count. The arrows were finding the black dot and I was having a lot of fun.

Tim and I stayed in contact during the whole process. We spent a great deal of time talking about how I was feeling. It was great to have an archery coach help me each step of the way. With Tim’s blessing, I decided to attend a local archery range. It was time to see if all the hard work would pay off.

Dave’s Archery always has 15 3D targets set up to shoot. The day was not perfect by any means. It was very windy, and I was a little nervous. This would be the first time I had shot at anything from more than 10 yards. I ranged the first target and it was 40 yards. Taking my time I drew my Mathews Traverse, settled the HHA pin, and the BEA Challenger found the 10 ring. With my nerves under control, I finished the last 14 targets without any issues.

On the drive home, I called to tell Tim about my practice session. He was glad to hear my results and the excitement in my voice. He urged me to continue with the exercises to reinforce the shot execution. I agreed to his request and I am still doing the exercises this very day.

Not everyone has access to a local archery coach. Many people do not even know where to look. Tim knows lots of coaches all over the United States. If you are looking to improve or get some help feel free to reach out to him on Facebook, Archery Encounters LLC. He can easily point you in the right direction.

How To Master The “Bowhunting Mind Game”