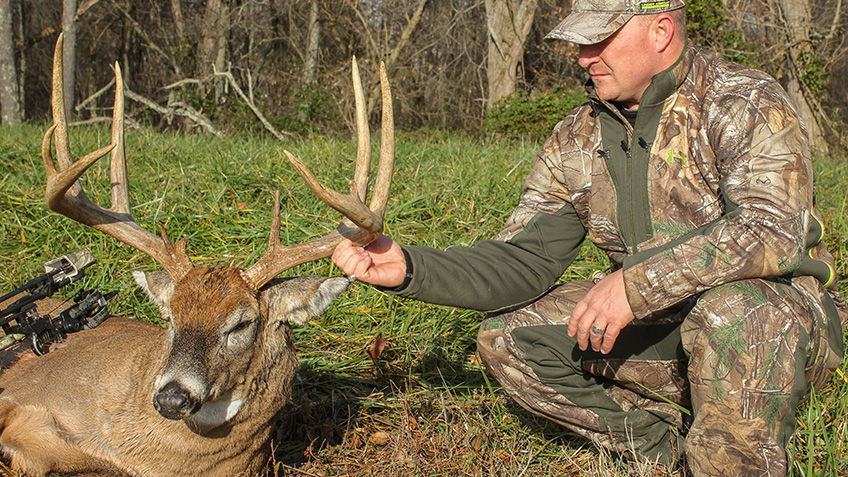 By Brad Fitzpatrick of American Hunter

Urban sprawl has forced hunters to become better at hunting bucks on ever-shrinking chunks of property. The best small acreage hunter I know is Chad McKibben. Though he’s only been hunting just over a decade, McKibben has managed to take really large bucks on properties where many other hunters would strike out.

So, what is it that sets McKibben and other successful small-acreage hunters apart from the rest of the crowd? What are they doing differently than everyone else?

Simple: they’re adapting to the conditions and developing new plans of action. Old bucks on small parcels are wary and they’ve evolved to thrive in the face of intense hunting pressure. But that doesn’t mean they’re unkillable—if you know what you’re doing.

Here are five tips that will help you score big on small plots of land.

1. Better Intel
High-tech trail cameras and handheld thermals are more than trendy tools that keep hunters preoccupied during the off-season. When used correctly, they offer you a glimpse inside the whitetail’s world that no previous generation could have imagined and, when used correctly, this technology can be a real benefit. You can scout effectively and efficiently with trail cameras, and thermals (where legal) offer a glimpse into whitetail behavior at night. Online maps offer an aerial view of your property and the properties that surround it.

All hunters have access to this technology, yet only a handful take really good bucks. Why is that? Simple: the best hunters are using that technology to the fullest and, perhaps most importantly, they’re reading between the lines. Successful hunters like McKibben don’t just download a picture of a big buck off their trail camera and show it off to a few select buddies. Instead, they overlay that information with what they’re learning while scouting with thermals. They’re adding plot points to a map. They’re storing data and pouring over it, looking for trends. You don’t have to turn your hunt into a data-driven statistical model of whitetail behavior, but you need the best insight you can get.

2. Keep Deer Comfortable
Studies have shown that white-tailed deer are highly territorial, so the buck you saw in August that dropped out of sight in September won’t be three counties away by October. He’s still there, somewhere. This notion that hunters “run deer off the property” is oftentimes a fallacy. You can run deer off your land if you’re putting too much pressure on them during the off-season, but what’s more likely is that the deer simply switched core areas and are moving at night. Your buck is still there, but you’ll never see him during legal shooting light.

The idea, then, is to make deer on your property comfortable. Virtually every successful small-property hunter I know has set aside at least some small sliver of land that they simply don’t hunt; a buffer zone that belongs solely to the deer. What’s more, these hunters work to minimize interference on the property. Food plots and water sources are other valuable “comfort” assets for deer, but these, too, are designed to minimize pressure on the animals by providing food and water with shelter nearby. The goal is to set up an environment where deer will continue to act naturally, making them easier to pattern.

3. Read All the Signs
Some deer sign is obvious—rubs, scrapes, tracks and deer sightings—and these are the things that we as hunters are trained to recognize. But finding deer on small acreage requires reading all the sign, even the less obvious stuff, to get in tune with what the deer on your land are doing. This isn’t some mystic second sight, but rather a detailed understanding and recognition of subtle cues that other hunters miss.

One example is pinch points. Deer tend to funnel into these areas out of habit, and although there may be little sign that directly relates deer movement to these areas, a good hunter will learn to recognize them. Another key feature is habitat edges. Deer are particularly drawn to places where two habitat types come together, areas that biologists call ecotones, and you should be able to spot these ecotones and figure out how the deer may use them. You’ll also want to find overlooked areas. The property I hunt is practically a postage stamp—just 28 acres with other hunters on every border—but there’s a creek that winds along the boundary line, and within that creek are small islands piled up with debris from past floods. Those scrubby islands are difficult to hunt and virtually impossible to approach without being detected, and I felt certain deer would use them. I never scouted the islands directly, but set up on a finger draw that leads to the creek and killed a very nice buck early one morning as he slipped back to his sanctuary in the creek.

4. Proper Preparation
The lines at the local sporting goods store will be quite long the day before hunting season opens, and that’s an indication that most hunters didn’t properly prepare for hunting season. On small properties, you may not have the luxury of uneducated deer or the ability to move to a different area once you’ve spoiled one hunting site. That means you have to be ready to take that buck on day one, and you must also be sure you aren’t announcing your presence to every deer in the woods.

Well before the season opens, your stands should be set and shooting lanes cleared. Use natural terrain to hide your setup location and pay close attention to both prevailing wind currents and thermals. And if the wind is wrong, don’t push the envelope. One overzealous misstep may alert deer to your presence, and that will ensure the buck you’re after won’t show himself during daylight hours. Be certain all your gear is situated so you can slip into your stand without disturbing the area. That means no rangefinders dangling from neck straps to clang against a metal ladder stand, no heading back to the house because you forgot your release or your ammo. It’s not a bad idea to make a “what can go wrong” checklist that helps you avoid pitfalls. Did you pack all the gear on that list? Are you paying attention to the wind? Are you getting to your stand early enough to let the area settle before hours of peak movement? Have you accounted for thermals? By foreseeing these problems, you can avoid them and, in doing so, avoid spoiling your hunt.

5. Persistence
Hunt smart, but hunt hard. We tend to think of deer as robots that are programmed to follow the same routine at the same time of day, and if we crack that code, we can be assured the buck we’re after will show up at a certain time and a location. That’s rarely the case. On small properties, something as simple as a swirling wind can ruin hunting on the entire place, and you have to stay out of the woods when that happens (unless you can access another stand without alerting every deer in the woods). You may also find that, during the rut, that big buck that you’ve seen on the neighbor’s place might make a trip across the border to rendezvous with a receptive doe. Or perhaps today’s the day the farmer next door decides to burn brush piles, and in doing so, pushes a giant your way. It’s not easy to tag big deer on small acreage with pressure all around, but it’s impossible to tag a big deer if you aren’t in the woods.

How To Corner A Buck