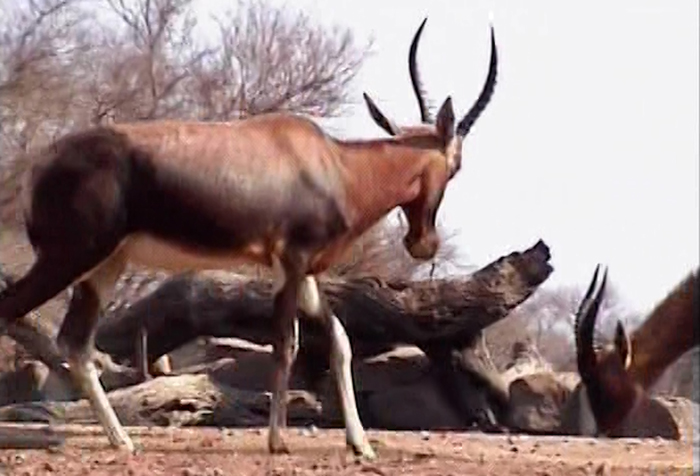 Dust blew in my face like a vacuum in reverse. The fine particles quickly became mud on my taste buds. As the wind blew, I swear I could taste the anticipated meaty game steak for dinner. Then something crunched between my teeth and I realized I had been chewing. It was so tempting to spit it out as I thought of all the creepy crawlies that lived in that dirt.

I looked at the waterhole, still empty. If I spit this out. It will stay empty for sure. Defeated and seeing no other way, I swallowed. Now, I was more determined than ever.

My face filled an opening were the dirt was swept in by the breeze. The hole was no bigger than a conventional brick. It was a hole level with the surface outside.

This was the twelfth time I had scanned the waterhole’s perimeter. I sucked a few breaths of fresh air from outside the blind then pulled back from the opening. It had been seven hours since the sunrise.

My nose filled with dust as I lifted my arms to stretch. Amazingly, I only smelled African dirt.  Not bad, the scent oxidizer I sprayed all over myself that morning was still working, even though I’ve been sweating for hours. I sighed and thanked ATSKO for inventing No-O-Dor spray!

The wind was bad. It was blowing from me to the water. I mopped my face with the cuffs of my camo shirt. Today we were hunting blesbok.

Blesbok is an African antelope. Its face reminds me of a film negative of the pronghorn antelope. There is a prominent flair of white fur from the tip of its nose that thrusts up on its forehand, and sometimes beyond. This ruddy antelope is slightly larger than an American pronghorn but is more of the size of a whitetail deer. I’ve seen hundreds of male and female blesbok and both have horns, though the males are noticeably thicker.  The ridges on the horns are clearly visible. The horns grow up and gently out before turning in and forward again. The sharp tips could puncture something quite readily, except that I’ve never seen one stick around to square off.

Blesbok are skittish and not at all curious. Meaning, they are usually on high alert! I knew I would have to be extremely still and hope my scent wouldn’t be carried out the window. I frowned noticing the air swirls carrying dust out little holes near the ceiling.

I looked down at my boots; Earlier, I had filled them with No-O-Dor powder. I knew I would need a miracle to suck away an ocean of foot odor. The taste of mud on my lips again reminded me that the wind was still wrong. I grimaced. Edgy animals never take chances, I thought. Only time would tell if my scent suppression had worked.

My thoughts drifted… I knew that a local cheetah had been killing the little herds of blesbok recently.

A cheetah would kill everything in a herd of plains game even though it couldn’t eat it all. Cheetahs just don’t have an off switch. There are a lot of things in Africa that don’t understand conservation, but the professional hunters, also called PH’s, and ranchers that I was privileged to hunt with were all the exception. Some of the wildlife veterinarians I had met would do things that would make any sane man shake his head because the animals are so dangerous. Their love of Africa’s critters has kept their adrenaline high.

Back in the blind, I noticed the pair of doves cooing outside of my stone sauna were holding their breath for a moment… I peeked out from the shadows seeing a lone zebra making its way to the water. If there is an animal more watchful then a blesbok, it would be a zebra… or a vervet monkey, I thought. I was delighted to have the zebra’s company. It gave me something to focus on.

Suddenly, over its back, I noticed a pair of horns in the brush. I blinked. Had they been there all along? Had we been staring at each other for hours as we waited? Was this blesbok using other species to check for a safe waterhole?

After sopping up water for nearly 5 minutes, the zebra left, its stripes cloaking it against the pale sticks and thorns of acacia trees. One of the blesbok snorted as he gave the all-clear, then sauntered toward the water.

I reached up and unhooked my crossbow from where it hung by my head. Then, careful not to make a sound, I lowered the device into the shadows. My eyeball’s locked on the wary blesbok.

I had never studied one of these creatures so close before. The white streak coming down from its horns made it strangely difficult to see its eyes. It scanned and rescanned the area for predators, its nose held high.

I stood completely still in the darkness.

The strange creature switched personas as its confidence grew. His strut was unashamedly haughty as he chased off a smaller Impala who had rushed in for a quick sip of water.  Then he strode toward the logs that offered a scrap of shaded, cool water. At once his two friends piled up behind his right shoulder and they all began drinking their fill.

My fingers tightened around the crossbow’s trigger guard. I began to sweat… It was time.

The closest bull was sucking in water like a sponge.

I leveled my sights. His legs were spaced apart in a hard quartering shot. I focused on the opposite leg imagining where the vitals were… I slowly breathed out, letting my finger slide up to the trigger.

The bull lifted his head as my crosshairs held over the mark. I began to sway from the adrenalin, my heart rate increased. I blinked, another blesbok passed behind my target for an instant distracting me. I opened both eyes to making sure that a pass through was not going to give me a bonus bull. Finally satisfied, I started to squeeze the trigger and began my count. One…..two…. The bull was gazing into the distant brush surveying his territory. I saw a single drop of water fall from his chin…..three….Then another…….. SWOOOOOSH!   My bolt cut the air toward the opposite front leg. The carbon shaft slipped behind the bulls ribs and sliced forward through the stomach and still further into the left lung, right lung, than exited the right shoulder.

The bull leapt forcefully into the waterhole and charged forward toward the safety of the brush. One…………Two………Three seconds in, he closed his eyes and arrived in the hereafter.

I saw the beautiful beast give his all before his body relaxed and dropped out of sight. “Wow,” I whispered, still feeling the nervous adrenalin jitter through my veins. Outside the sunken blind, the dust swirled in the wind, all was quiet.

I smiled, grateful for the moment we had spent together in the hunt, then quickly made a plan to get ahold of Mu’layfee, a tracker at the Visser’s Citadel.

I could see the majestic blesbok from the top of the blind where I waited for Mu’layfee. He had tracked the small herd to that area in the first place.

I watched the heat lines flowing from the earth, so tall they obscured the distant stands of ironwood trees.

“A fine job you’ve done,” I replied. “The bull nearly fell in the blind with me!’

I pressed the button on my radio, “You may not have to use your tracking skills today my friend.”

I smiled and looked back at the blesbok, he would bless Mu’layfee’s village with meat for the week.