Is Your Bow Ready? 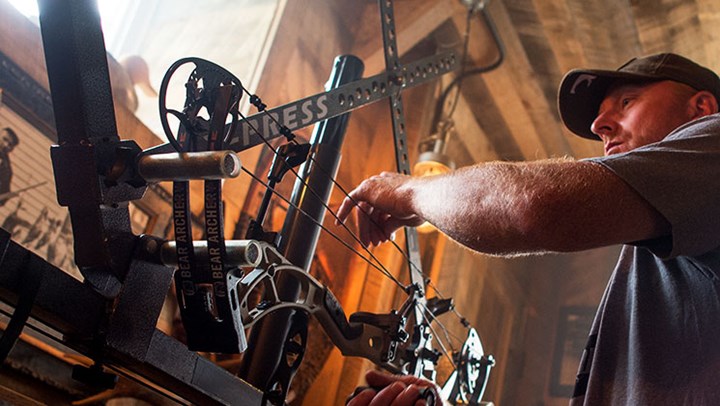 by Jeff Johnston of American Hunter

A 150-class buck slowly walked toward me. At 20 yards he turned broadside and he took a short pauses to browse on some leaves. I could not imagine a more perfect scenario.

When the buck’s head moved behind an oak tree, I straightened my bow arm decisively and drew. But as I reached the draw peak, I felt something pop … followed immediately by a severe pain in my right eye! I was blind in that eye!

I lowered the bowstring and felt my face, making sure I still had my eye. Baffled and also wincing in pain, my right eye clamped shut and watering like a Little Niagara, I glanced at my bow.

The rubber tubing that held the bow’s peep sight in alignment had snapped. Its frayed ends were cracked and rotten. I was lucky it didn’t put my eye out. The buck was even luckier. I’d just learned another valuable lesson the hard way.

In my 30 years of bowhunting, I’ve experienced strings coming off cams; arrows falling off rests during the draw and drop-away rests failing to drop away after the release; screws working loose; sight pins breaking; mechanical broadheads coming unhinged before the shot; and release aids vanishing during the hike in.

All these hard-learned lessons have taught me to be very selective of my bow as well as the accessories I attach to it. These days I set up my bow hunting rig for simplicity. Sure, there are a growing number of archers, mostly Westerners, who are prepared to shoot at 85 yards, and they set up and fine-tune their bows accordingly. I have one of those rigs, too. I just don’t use it much. Where I usually hunt whitetails, 40 yards is my max range in most situations. However, I prefer shots under 20 yards. So I set up my bow accordingly, I bombproof it before the season and double-check it while hunting.

Choose Wisely
There are target bows, and there are hunting bows. Stripped down bare, most are very similar. But after adding accessories, the two can become vastly different bows. Target shooters demand precision; hunters demand reliability, reasonable accuracy and stealth.

The best hunting bow is probably not the fastest on the market. Speed exacerbates flight issues and vibrations that cause noise. Accessories for a hunting bow should be compact and battened down tight so that during the thrill of the chase—or while pulling a bow into a treestand, or hiking through briars or whatever—parts won’t fall off or get jarred out of whack. Hunting setups should be geared toward toughness and consistency. Choose your bow and its components with this in mind.

Component choice gets tricky, as many components come down to personal preference. And don’t be surprised if the sales person behind the counter encourages you check out all the newest, top-end stuff the shop has on the rack. After all, he truly believes in it, its quality is undeniable, and his profits are typically higher. Plus, all of it performs great on the indoor range where you will test-shoot it. In general, however, the sights, arrow rest, release, etc., you choose ultimately make the bow more suited toward hunting or target shooting.

One example is this, it’s possible to be slightly more accurate with a ?-inch peep sight. On a target range in good light, there’s no downside. But, at dawn, in the shadows of the woods, a tiny peep sight might not let in enough light and that can prevent you from seeing your pins. It’s happened to me. That’s why I recommend peep-sights of 3/16-inch or larger.

Likewise, the currently popular single-pin, dial-in bowsights (that were originally designed for targets) can backfire when a deer decides to move after you draw. So I recommend the more reliable standard, multiple-pin sights that can be locked down tight once they’re sighted in. And Micro-adjustment bowsights are handy; just make sure the sight is robust and all screws can be turned down tightly. Avoid bowhunting sights with plastic pins or those that expose large portions of the fiber-optic elements; they can hang up on brush and break too easily.

A similar situation exists with arrow rests. For every one who likes a full-capture rest like Trophy Ridge’s Whisker Biscuit for its simplicity, there are two more who swear by drop-away rests. I’ll concede to the drop-away advocates for long-range and target shooting, but I’ve also had drop-aways fail me.

For the majority of treestand hunters who keep shots inside 40 yards, I think full-capture rests are best. Unlike drop-aways, they’re unwavering with few parts to fail. They’re easy to replace if something does go wrong. They’re accurate enough for the vast majority of bowhunters, and they prevent the arrow from falling off the rest. They’ve also evolved. A rest like Octane’s Hostage Max secures the arrow but lets the fletching pass through unmolested. Sure, you’ll probably get ’Biscuit-shamed at hunting camp, but what do you care when you smoke a big buck?

Conduct Pre-Hunt Prep
The biggest culprit of bow problems is some screw that comes loose over time (due to the vibration caused by each shot). At the least, a loose screw will cause undue noise; but if it comes out altogether it could spell catastrophic failure. To guard against the Loose Screw Fairy, buy a tube of Loctite, some GoatTuff glue and a set of Allen wrenches.

Systematically find every screw in your setup, apply Loctite and tighten it. Place a tiny dot of Goat Tuff glue on every vital knot such as those at the ends of the bowstring’s serving, the knots that secure your peep sight and the ones in the string that controls your drop-away rest (if you choose to ignore my above advice on rests).

Next use a Sharpie to make reference marks on the riser to record the exact location of your sight bracket and rest. If these components come loose in the field, the marks will help you re-attain zero with minimal effort.

Use adhesive-backed moleskin or rubber to line any part of your bow that may come in contact with another. For example, place moleskin on the arrow shelf so if the arrow or launcher hits the shelf, its sound will be muffled.

Check all plastic and rubber parts regularly (especially peep-sight tubing) for signs of wear. Waxing the string will mitigate stretch due to friction and moisture.

Check It on Stand
As soon as you get settled into your stand, nock an arrow and draw your bow. Anchor, aim and do everything else in your pre-shot routine but actually shoot. This is a test to make sure all systems are go.

Is your peep sight aligned perfectly? Is your rest working properly? Sights visible? Make sure no foliage has become pinched between the cam and the string that could cause malfunction.

You’ll find whether your release is strapped on correctly, and if clothing or gear, such as your jacket collar, heavy coat sleeve or binocular harness, is in the way of the string. Trust me, now is the time to run this check, not after a big buck runs off.

Carry a Fix-it Kit
If a bow blows up, most hunters are forced to call it a day and head to a bow shop asap. But plenty of common problems can be solved with Allen wrenches and an archery target carried in the back of your truck. If something comes loose, fix it, then verify by shooting.

Finally, I recomend you carry a spare release that’s the exact model of the one you currently use when hunting. Take it from me, the “Fiasco Kid.” I’ll spare you my sob story of when I lost my release in Colorado somewhere near the peak of the mountain … .

Things You Need For Hunting/Camping

The HATCHBACK One Person Stand

Leaf Colors Show You Where To Deer Hunt