This is the short story of deer vision. To understand how a deer sees you need to dissect a whitetail’s eyeball, and that’s just what we are going to do. I located an organ donor at my deer processor and am dissected an eye that we’ve all seen thousands of times. However, I’m guessing that you have never seen a deer eye from this perspective.

An eye brings in light reflected from objects and changes the light into electrical signals that are sent to the brain via the optic nerve to be interpreted as images. How that is accomplished varies between mammals. 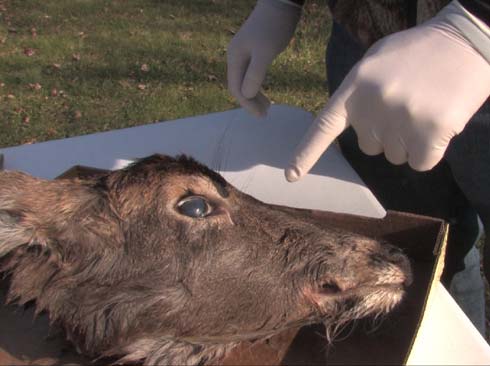 The specialized eyes are a deer’s second layer of defense.

With a deer eye, the light is brought in through a pupil. The iris is a collection of radial muscles that open and close the pupil opening. A cornea covers the pupil opening. The cornea is the clear outermost layer of the eyeball. It is where your contact lens would sit.

The unique aspect of a deer’s pupil is that unlike ours it is elliptical (a slit) rather than round. They have a cat-eye design. Because of this fact, the pupil can open extremely wide to let in lots of light. In a deer, it actually extends the entire width of the eye. This wide pupil is part of the reason why a deer can see so well at night. 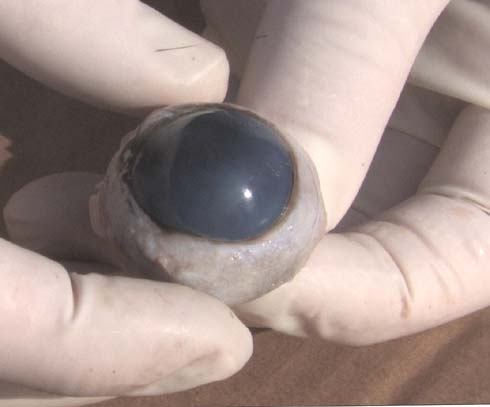 Once I removed the deer eyeball from the skull I could see the optic nerve that connects and sends the eyes data to the brain. Notice how large the dilated iris/pupil is in this eyeball. It is probably ten times the surface area of a dilated human eye. 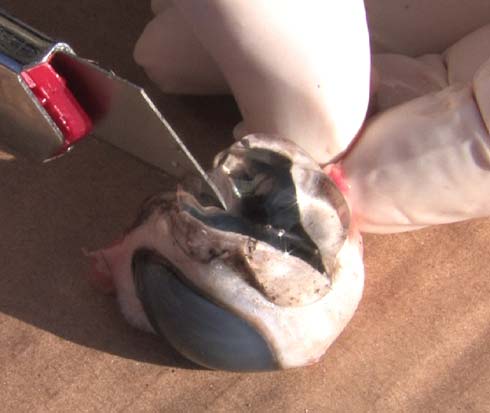 I took the liberty of cutting open the deer’s eyeball to see what made it tick and here is what I found. First, it is notable that the eyeball’s covering is very tough. This is important because a deer is exposed to sharp sticks and antlers during fighting. The surprising leathery nature of the eyeball was evident when I began to cut it with a razor.

The fluid that comes out of the eyeball is called Vitreous Humor. That Latin name means a gelatin-like fluid. It resembles thin clear jello. Once I cut the outer covering, the gelatin dumped out easily and with it came the lens. The lens is interesting. It’s a solid rubbery structure that is large and convex like a magnifying glass. The deer’s lens is clear unlike in humans where it is tinted yellow. The yellow in our lens filters out harmful UV rays. Deer can see UV. 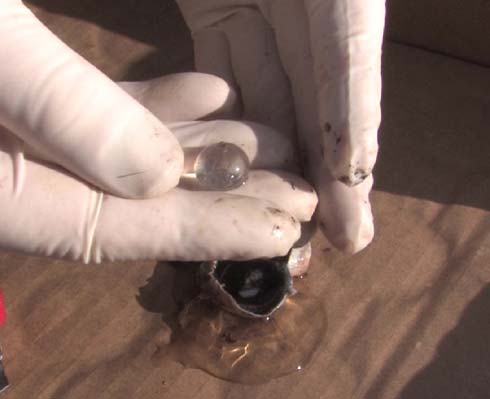 The jello-like vitreous humor spills out and the lens came out with it. Like a convex magnifying glass its job is to focus light.

The most important structure covering the back of the eye is the retina. It’s not what you’d expect. The retina is a thin, see-through membrane that covers the rear of the eyeball like a curtain. I was able to move it around with a probe and even move it to one side. It’s actually connected to the optic nerve. 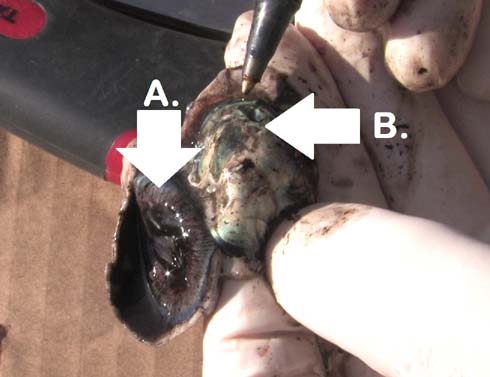 A. This is a great view of the muscles that operate the pupil size. They radiate around the pupil and open and close it. B. is the rear of the eyeball and the transparent retina covers it like a screen. The photoreceptors are here. Behind it is the dark bluish Tapetum or reflector. 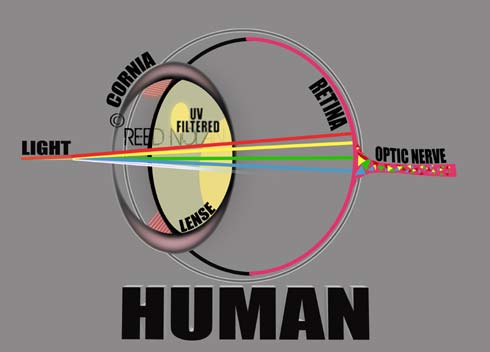 Humans see all the colors and have a yellow-tinted lens to filter UV. 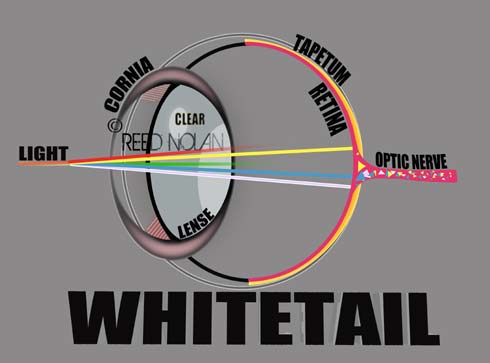 Deer eyes see only yellow and blue and their lens is clear. Also, note the reflective tapetum on the rear of the eye.

The retina is the location of the photoreceptor cells. I’m sure you remember the words rods and cones from high school biology. The retina is where they are housed. In humans, we have many cones (used for color vision and visual clarity) and far fewer rods used visual sensitivity in low light. Deer have ten times the rods as us but very few cones. This is because they operate in low light most of the time.

The cones offer color vision… but deer have poor color vision. They lack a red cone and see only yellow and blue. Uniquely they don’t have a UV filter in their eyes and can see into the UV spectrum. On the other hand, they do have the cones arranged in a unique configuration that serves them well. Many predators eat deer. Deer need to be on the alert at all times. Therefore, God placed their eyes on the side of their head so they can see in a 300-degree arc without moving their head.

Cones are the photoreceptor that gives us visual acuity or sharp focus. In your eye, the cones are bunched together concentrically so we have a very focused spot in the center of our vision. Right now, you can see these words clearly but the words at the edge of your vision are blurry. We call that the fovea or sharp spot. In a deer eyeball, the cones also are arranged in a band across the retina. This means deer see sharply in a band around them, probably 300-degrees. This concentration of cones also allows them to spot movement. This is good if you’re watching for predators. 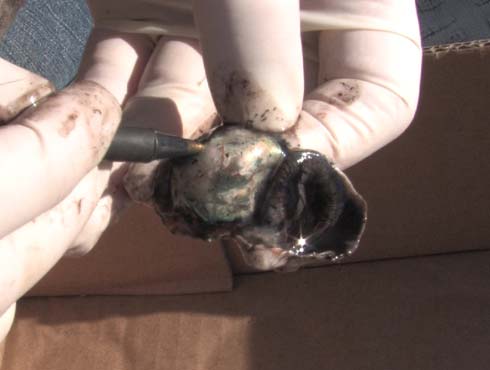 Another view of the back of the eye. The complex receptor structures in the retina are converting the incoming light into electrical signals that travel through the optic nerve to the brain where they are decoded as images. Hopefully, not the image of a bowhunter.

The next thing evident on the back of the eye is that there is a blue iridescent look to the back of the eye. This is a special structure called a Tapetum. This structure is a reflector and is why deer eyes shine back when a light is directed on them. The tapetum actually reflects incoming light back across the retina twice doubling the value of the light. This is important for their night vision.

#1562- I outsmarted this deer’s eyes. He should have been paying closer attention.

In review: Because their cones are arranged in a band deer can see movement better than us… don’t be moving around. They can see well in low light. The pupil opens extremely wide and lets in lots of light and the tapetum doubles all incoming light. A deer may see as well on a starless overcast night as we see at noon. They can see UV.

So there you have it, deer vision. It is amazing. Understand deer eyes and you will be a more effective whitetailer.

There's More Than Deer Out There