Follow These Tips To Have More Shed Hunting Success!

I’ll never forget the sight. More of an excuse to get my kids out of the house than anything, our “shed hunting” trip didn’t last long. But… it didn’t need to either. Barely peeking out of a fresh crust of snow, two tiny tines were reaching out toward the sky. I hollered loudly for my dad and sons… similar to how I get everyone’s attention when the first morel mushroom of the season has been found. “Guys… check it out, my first shed…” The boys, both quite young, were less than impressed, but my dad thought it was pretty cool. A small fork horn shed, from a buck, we passed all season long. With a bit of fresh blood and hair on the pedicle, I could tell it hadn’t been off for long. I think God wanted me to become a shed hunter because he certainly blessed me with the gift of that shed antler. As soon as I touched it I felt something primal. Man has been obsessed with antlers for countless generations, and being the first human to hold this antler felt amazing. Ever since then, I’ve tried to learn as much as I could to become a better shed hunter. 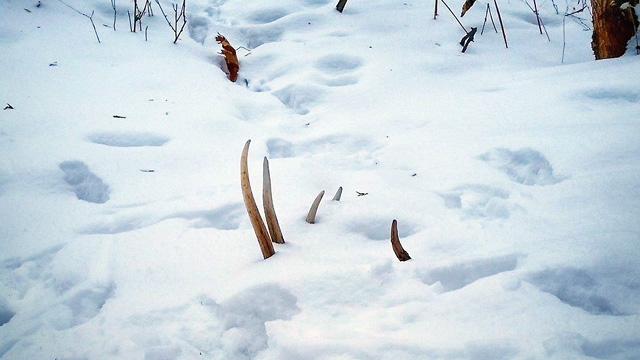 Working in the outdoor industry has allowed me many cool opportunities. I’ve had a chance to work with most of the big celebrity’s in the industry and learned a lot from them along the way. Recently when talking about spring content, I suggested shed hunting. I know for a fact I’m not the only one out there who is interested in learning more about this sport. Shed hunting is becoming an international obsession, and for good reason. Everyone can be involved, and it can be as challenging or easy and one makes it. Not only are shed antlers from all sorts of animals worth a lot of money, but hunting for them is a great way to involve the family, and as I did with my kids — I get everyone outdoors for some fresh air and exercise. I also like the scouting opportunity and the chance to plan future stand locations.

The first rule to remember when shed hunting is that the greatest chance of finding shed antlers will happen in areas that bucks were frequenting during the “shedding” season. Depending on latitude, the shedding season usually begins anywhere from December through April. Usually in my home state of Michigan bucks shed sometime in January or February. Strangely enough, many hardcore shed addicts that I have spoken to have pointed out that some bucks will shed within a day or two on the calendar each consecutive year. (I thought that was interesting) To best identify when bucks have shed, some hunters still run trail cameras. Others simply do a lot of glassing and long-range observation. One of the trickiest parts about shed hunting is self-discipline. Some overzealous shed hunters hit the woods to scour bedding areas a bit too early each winter and end up sending antlered  bucks running to all four corners of the wind. When an antlered buck hits the highway in the winter, there’s no telling where those sheds will fall. Adversely, the longer a hunter waits to look for sheds, the greater the chances of them being chewed up by rodents. Me personally, I like to wait until March. Most decent-sized antlered bucks have shed by then, and the chances that the antlers are still intact are pretty high. 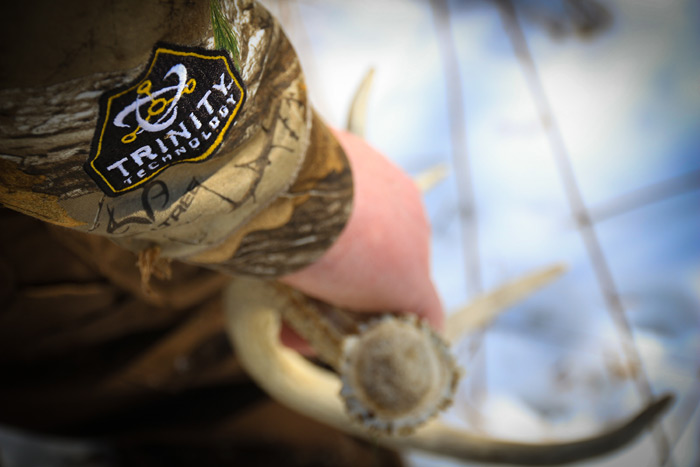 I take an inside out approach to shed hunting, by first starting to look at winter food sources. In my experience, the greatest chances of finding a shed antler are where the hungry bucks had to aggressively dig and paw for food. I then walk the trails hoping to catch an antler or two that got knocked off by brush, or at fence jumps. After that, I scour bedding areas. I have also heard and noticed for myself that big bucks will drop their antlers near each other. Due to the unbalance on a bucks head with only one giant antler, the buck will soon become annoyed and work to get the other side to drop. Younger bucks don’t try to shed as much because the weight difference of only one antler isn’t as noticeable to them with small antlers.

As with anything, when you talk to a few people, you’ll likely hear a few different opinions. Here’s what a few other passionate hunters have to say about shed hunting.

Tyler Zygmunt
Also calling Canada home, Tyler Zygmunt is a modern-day mountain man. Among many other things, Tyler is a professional trapper. I assumed Tyler sold all of the sheds he finds, but I learned that’s not the case. “I don’t sell them, it’s one of those things that I just love to do, everything I find comes down in my basement and I keep on collecting. It is hard here because we don’t have the deer numbers here like you guys do there, and our moose numbers are not the greatest right now either. But I keep plugging away and it’ll happen. I love finding antlers, it gives me a boost knowing that the animal made it another year, moose or deer. Nothing beats the fact of knowing monster moose like this made the most of the winter and is likely going be around next year! So many wolves around it’s really amazing that they do make the winters. I’m trying to help the whole wolf problem! Haha.”

Tyler is one heck of a trapper and moose hunter too, and continuing to do his part to make sure he has more moose and deer sheds to hunt each winter by controlling the predator population.

Aaron Zimmerman
A bit further south and still in the heart of big whitetail country, Aaron Zimmerman calls central Ohio home. Aaron is generally hunting small pieces of property, with a high amount of hunting pressure. “Where I have had the most success is looking in any areas where deer congregate. I spend the most time in staging areas, feeding areas, main travel routes, and bedding areas. I don’t waste time zig-zagging for the off chance of finding a shed. Where possible I will get a high vantage point on a cut bean field or corn field and glass for sheds. Knowing where the herd beds, I will watch my trail cameras until a buck shows up after shedding. Once I see that I will just walk the trail back to his bedding area and will typically find them along the way. I’m careful to only go into a bedding area one time during late February. Whether I find any sheds or not I will not go in again.”

Aaron’s logic and strategy also make a lot of sense for his location. It is especially important on small properties to not look too early and risk bumping deer that haven’t shed yet off of the property. I personally have bumped antlered deer out of their winter beds and watched them run away, kicking myself for now having no clue where they’ll drop their racks. 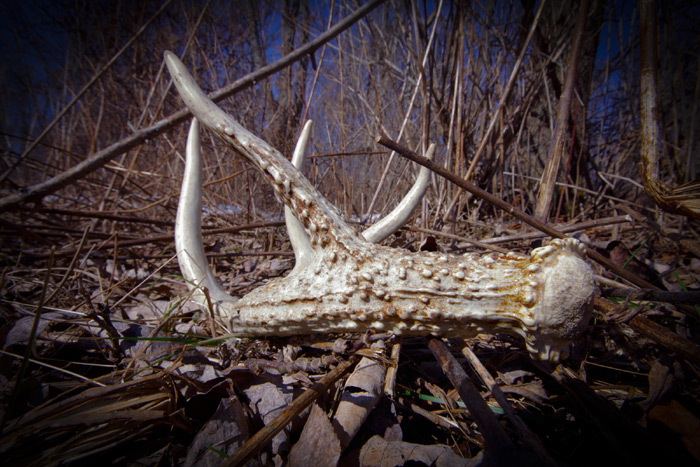 Shed hunting is an absolute riot, and a great way to beat cabin fever. Not only is it a great excuse to get outside, but it’s a great time to invade bedding areas with little or no consequence while formulating a plan for the next season. So get out this winter and try shed hunting, and when you find your first shed or your hundredth, be sure to send us pictures on our Facebook page, Click Here.