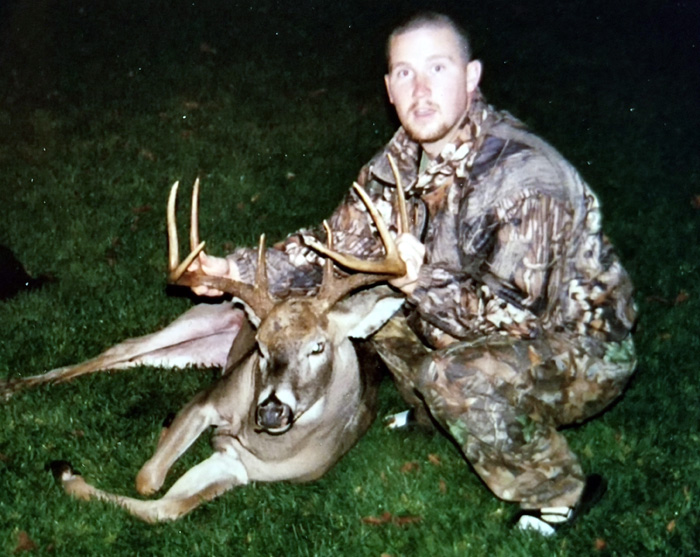 My Uncle Russ introduced me to archery when I was young. Uncle Russ owned a store in our town and he made a place in the back of his store where my cousin and I could shoot our recurve bows. My cousin and I spent many hours making our archery targets out of cardboard boxes and shooting them. I loved shooting bows from the very start.

After many years of struggling to get better with my recurve I finally realized I was left eye dominant and needed to start shooting left handed. It was hard to find a left handed bow so I would just shoot a right handed bow, left handed. I continued to do this until my early 20’s when I found a steal of a deal on a left handed Bear compound bow. When I first got that Bear bow I shot fingers and had to practice every day to gain confidence in my ability to shoot at a small target.

By the fall of 1997, I was confident in my ability to consistently shoot at a target under 20 yards. I hunted a few years with that set up but never had the opportunity to harvest a deer. So in 1999, I purchased a left handed Jennings Buckmaster compound bow and a new release. Right away I noticed the difference on how well I could shoot and how much more accurate I was out to 40 yards. With my confidence at a new high I looked forward to the opening of archery season.

On the first Monday of the Pennsylvania archery season I harvested my first archery deer. After teaching school all day I rushed home to change into my hunting clothes. I arrived at the 40 acre farm and climbed my 12 foot ladder stand. Less than an hour into my hunt a half racked 2 point walked toward my stand. When the deer had closed the distance to 7 yards I released my arrow. The arrow flew true and found the buck’s vitals. As I watched the buck run away I was in shock at what had happened. I called my uncle and he came out to help me blood trail the buck. I remember shaking all over, from the rush of adrenaline, as I patiently waited for my uncle to arrive. After waiting for about 45 minutes my uncle arrived and together we tracked the buck. It didn’t take long to find my bucks due to a near perfect shot. Working together, we dressed and dragged the buck back to my truck.

In the spring of 2003 I got to shoot a Mathews Legacy. I purchased the Legacy and as it got closer to archery season I started shooting fixed head broadheads that were not flying like I wanted. I headed back to my local shop where I talked with the owner who told me I had two options: tune my bow to shoot the fixed blade heads or get a mechanical broadhead that flew like my field points. I had never shot a mechanical head he encouraged me to try a Grim Reaper. These broadheads had only been on the market a few years and already had shown great success. I decided to keep my fixed heads. For whatever reason I was not sold on the idea of a mechanical broadhead.

The 2003 archery season was going very well. I knew there were a few nice bucks on the 40 acre farm. The farm owner had filled me in on the bucks he was seeing each day. One evening I was 20 feet up a cherry tree and saw movement in the brush. I watched as a nice 8 point emerged from the thick cover, closed the distance to 25 yards and stood broadside. I drew my Mathews, found my anchor and let the pin float. The arrow hit a bit high and I watched as the buck went down the hill and crossed the creek. I was stumped at what had happened and decided to go home and come back later.

After giving the buck about 8 hours to expire, my friend and I took up the blood trail. We followed the trail and found the arrow. The blood trail began to dry up and eventually we found a bed. There were a few drops of blood in the bed but that was it. We backed out and headed home. Over the next few days I returned to the farm and did circles and grid searches. I never did find that buck and in the back of my mind I thought it was due to the fixed broadhead.

With the rut getting ready to heat up I decided to look at the Grim Reaper broadheads one last time. I took my bow with me to the shop to see if they would allow me to shoot a Grim Reaper head. The owner explained how the Reapers worked. I shot the 3 blade mechanical head a few times and liked how they flew. With my confidence a little low on fixed heads I purchased 2 packs of Grim Reapers. This was probably the best decision of my bowhunting life!

On November 2, 2003 I made my way to my treestand. The day was perfect: high pressure system, clear blue sky, temps in the low 40’s, the sun was shining, and no wind. The sun felt amazing on my face and my eyes grew heavy and I decided to rest them for a moment. I could hear the birds in the trees and the squirrels running through the dry leaves. Just what I needed to clear my mind and recharge my batteries.

I don’t quite remember how long I had my eyes closed when all of a sudden I heard a long grunt. I opened my eyes and looked around but didn’t see anything. Was my mind playing tricks on me? I closed my eyes again and again, I heard a long grunt. About 40 yards away I saw a single deer in the thick brush. Grabbing my grunt tube, I gave a few short grunts. The deer emerged from the brush and I saw right away that it was a great buck and he was walking toward my stand. He grunted the whole way in. With my bow in hand I waited as the buck walked under my stand. Looking straight down at the buck I felt confident that I could place a shot between his shoulders. Without hesitation I drew, found my anchor and let the arrow go. For the first time ever I heard the Grim Reaper find its mark. The arrow blew through the buck and he took two giant leaps. The buck stopped and stood like a statue not knowing what had happened.

I could see blood pouring out from the hole the Grim Reaper had made as he stumbled and he fell less than 15 yards away from where I shot him. This was the first archery kill in which I watched the deer drop in my sight. Getting out of my stand and finding my arrows, I noticed the Grim Reaper head was coated in blood but in the closed position. I opened the head and cleaned it off. It was still razor sharp! When I reached the downed buck I noticed the entrance and exit holes from the Grim Reaper. The 3 blades opened up and made two large, devastating holes. The large 8 point with tall tines was the largest Pennsylvania buck I had ever taken.

Walking to the farmhouse to see the property owner I couldn’t believe how well the Grim Reaper broadhead had worked. Borrowing a tractor from the farmer I was able to get the buck to my truck without hurting myself. After loading the buck I thanked the farmer and headed home to show off my buck. On my way home I decided to head to the archery shop to thank the owner for recommending the Grim Reaper broadheads.

There were a few other hunters at the shop when I arrived. Everyone at the shop came over to see my 8 point. They could not believe the size of the holes the Reaper had created. A few of the hunters went back into the shop and purchased some Grim Reaper heads. I guess seeing the results of the Grim Reaper first hand was a selling point.

When I finally arrived home a small group of people were waiting for me. As I stopped in the driveway friends and family surrounded the back of my truck. My grandmother and grandfather were there waiting. Both of them hunters themselves, were excited to see such a beautiful buck. My grandmother wanted me to pull the buck out of the back of the truck so she could take some good pictures. After taking a bunch of pictures she and my grandfather headed home. A few of the neighbors helped me get the large bodied buck back into my truck.

A Major Tip For Treestand Hunters

Chris Parish Shows You How To Call Gobblers