THIS MORNING I WENT TO ONE OF MY FAVORITE WILD TURKEY ROOST. AND THE GOBBLERS WERE THERE TOO. 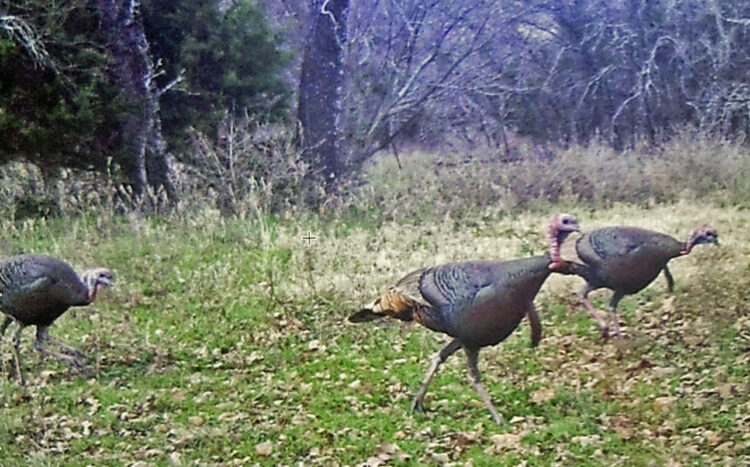 I started my wild turkey hunting day on a high spot right up against the river bank and close to a curve in the stream. I parked my truck in some thick cedar trees and slipped in carrying a Double Bull ground blind, my bow and 3 decoys along with a pocket full of mouth calls and a slate and striker. I’ve hunted this exact spot for years and knew exactly where I wanted to go and where to set everything up.

When I hunt an area I’m familiar with I prefer to stay out of it before I actually hunt it. I just do not want to take the risk of spooking any gobblers or hens. I’d much rather keep they stay in “relaxed and unaware” mode instead of making them “wired and jumpy.”

Soon a faint streak of sunlight was visible on the eastern horizon. Soon afterward a very loud gobble sounded off from one of the large hardwood trees downhill on my side of the river (which is only 50 yards away). More gobblers joined in from the east and north. And they really piled it on, gobbling over and over.

Now it was a matter of which direction they went after they hit the ground.

The Toms and Jakes gobbled repeatedly. And when I heard the yelps of a hen that was between me and   the river I felt optimistic. A short while later I heard the hen fly down a little bit to the north east of me but still on my side of the river. Next I heard two different gobbles in the trees close by. And then they flew down and continued gobbling.

The hen appeared in the new, green ground growth. And behind her I saw the whites of the tops of two gobblers heads coming up behind her. Oh yea … things felt promising. It looked like they would pass by me to the left of my ground blind. Bow in my left hand, iPhone in my right, I got ready for them.

Then the last minute they changed their route and now would pass by me on the right. Because it’s what I do, I one handedly took two quicp photos on my iPhone and laid it on the ground. I needed to turn to get myself in shooting position.

Chances were very good that the gobblers would cut over to my jake decoy. But they didn’t. And, bottom line, I didn’t get a shot. Incidentally, the picture at the top of this page is the two gobblers passing the hen as this wild turkey encounter played out.

Once the gobbling ceased I waited for two hours and went to my truck and drove home. Things hadn’t worked out but it was still plenty cool. Yep, I like wild turkey hunting with my bow, life is good.

Where Can You Bag A Gobbler In Texas?

Learn The Cluck & Purr To Call Your Next Gobbler