Ben Pearson Was An Important And Essential Figure In The History Of Archery And Bowhunting.

by Frank Addington Jr.
in Bowhunting Articles, Bowhunting Posts, Interviews
1 0
A A
0 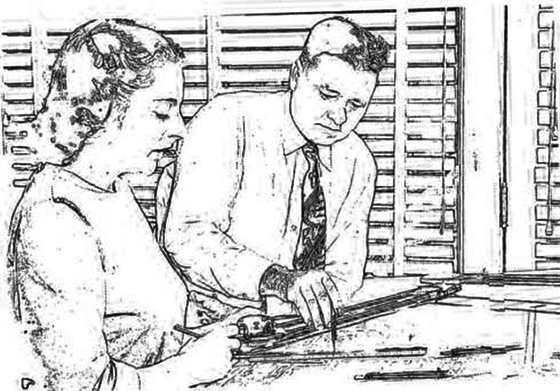 FA: Ben, you have a true heritage being the son of the great archer and bowhunter influencer Ben Pearson. Some of today’s bowhunters may or not be aware of just what your Dad did for archery but hopefully this interview will shine some light on one of our sport’s legends. Your father was inducted with the initial class for the Archery Hall of Fame alongside other archery greats like Howard Hill, Fred Bear and others. Tell us where your father was born and what you know of his early life as a child.

BPJ: Many new bowhunters may be unaware of Ben Pearson’s influence on the sport of archery and bowhunting and know the name “Pearson” as a brand name of a bow and archery equipment manufacturing company. It is one heck of a heritage. It reaches back to the very beginning of the modern archery movement and is one in which a young Ben Pearson developed his hobby to become the World’s Largest Manufacturer of archery equipment, remaining in that position for better part of three decades. His life’s journey into the world of archery brought him into contact with what he would term the “greatest group of folks on Earth.” Dad had many friends, many of whom were also his competitors.

The Pearson name does exist in today’s market. I do not represent the present Ben Pearson Archery Co., and this interview should not be viewed as anything other than an historical narrative primarily dealing with Ben Pearson and Ben Pearson Co. events prior to 1969.

Regarding your reference to Dad’s induction into the Archery Hall of Fame, I remember that in June of 1972, we arrived in Grayling, Michigan, where my mother represented Dad (as a founding “Charter” inductee) in being accepted into The National Archery Hall of Fame. The inductees are all revered names in the sport and were accepted into the Hall of Fame in alphabetical order: Fred Bear, Howard Hill, Russ Hoogerhyde, Ann Weber Hoyt, Karl Palmatier, Ben Pearson and Maurice Thompson. Mother, my sister Mary, and I, all had a very enjoyable time in Grayling. Fred Bear, in a kind but risky gesture, loaned me his Ford cougar to drive. I was just 18 years old at the time.

Dad was born a native Arkansan in the foothills of the Ouachita Mountains near Paron, Arkansas, in a log cabin, on November 16, 1898. It was a different world growing up in the sticks of rural Arkansas around the turn of the century. Dad’s early life in that world was nearly a short one. You see, he was kicked in the middle of the forehead by an unwary mule that was surprised to feel his tail being pulled by an obnoxious 3-year-old Ben Pearson.

I remember asking Dad what he did as a child and he replied that he played ball, swam and played with his boyhood neighbors, whittled with his knife and performed regular farm duty chores. I believe for a period of time he lived with an uncle until the family re-settled. He and his brother, Quinna, traveled with their father on business and on one of these trips, according to my late uncle, watched Confederate war veterans perform shooting exhibitions. This left quite an impression on the both of them, according to my uncle.

FA: Where were you born and what was it like growing up?
BPJ: I was born in Davis hospital in Pine Bluff, Arkansas, which was a super town in which to spend your childhood during the 50s and 60s. I have always thought I had a happy and normal childhood. In retrospect, I was very fortunate. Sure, I went to school, played ball, shot my bow. But I also experienced many wonderful travels and met many accomplished individuals while accompanying Dad.

For instance, Dad taught me how to “trick shoot” and perform exhibitions when I was 8 and made me part of the show when we traveled to Mexico City in 1963 to participate in the Latin American Trade Fair in Mexico City. We had a phenomenal experience there.

Another memorable example came later when we performed an exhibition for the father and son banquet at Montgomery Ward in Chicago, in about 1967 or 68, I believe. I came home from that trip to tell my buddies that I had just met Gale Sayers, Mario Andretti and Stan Musial, who were also at the banquet, mainly signing autographs.

But I tell you, great memories were also made visiting Dad at the plant, smelling the strong, pleasant scent of Port Orford cedar emanating therefrom and witnessing all the activity, for during that time frame Ben Pearson Co. employed 600-800 people.

FA: Your Dad was given the title of ‘The Father of Modern Archery’. At what age did you become aware of your father’s importance in the world of archery and what did it mean to you?

BPJ: I knew “early on” that Dad was a key personality in the archery world, perhaps by age 7 or 8. However, it really did not “sink in” just how important until later. Regardless, I was and continue to be very proud. My appreciation for Dad continues to grow to this day!

Many magazine articles, newspaper quotes, quotes from individuals, etc., have referred to Dad with high regard. The following quotes cover a span of decades and are just to name a few and yes, several refer to him as “Father of Archery”.

FA: I saw the quote that compared your dad to Henry Ford. Let’s discuss that…

BPJ: In the early 1930s, Dad’s advertisements stated, “New manufacturing methods enable us to make these unheard of low prices.” (At that time there might have been two individuals working with him). Yes, Jim Dougherty and others have compared Dad to Henry Ford and for good reason.

Henry Ford developed the assembly line after becoming aware of the efficient processing of livestock in the slaughter house operations in Chicago and soon incorporated scientific management into his production. The operations to produce a product were broken down into components and workers became specialized for that particular component; the assembly line was configured to place the components together in the order required for a completed product.

Henry Ford said that he would build a car for the multitude. Three decades later, Ben Pearson did the same for archery by following Ford’s example. Ben Pearson applied scientific management to the workplace much the same as Ford. He also personally developed much of the machinery necessary to produce a component or required operation during those early years and developed a systematic flow to the production process.

Therefore, in 1940 he was able to make the following statement in his catalog of the same year: “For the first time in the history of American archery, the manufacturing of precision bows and arrows has been placed on large scale production … We are able, more than ever, to maintain the highest standards in precision, because our large scale operations enable us to use craftsmen with highly-trained specialized ability. Thus, with the best in stock and the best in craftsmen coupled with our rigid precision supervision, we are able to produce superior archery products which have no peer in America—or the world.”

Sure, there were custom bows beautifully handcrafted in those early years of the company (1940s). These were higher end product and only one of the two general classifications, the other being mass-produced bows. There were variations of each class.

FA: Was getting involved in the sport something that interested you growing up? Did your Dad mentor you in archery or did he pretty much leave it up to you if you want to learn or go a different way?

BPJ: I could not get enough of it and of course Dad mentored me! I was shooting the front door with rubber suction tipped arrows when I was 3 or 4. I really loved to shoot and became accomplished in trick shooting and loved to hunt but never entered more than a couple of tournaments.

FA: Did you want to follow in your father’s footsteps?
BPJ: Yes, sure, me and about five million others at the time.

FA: Let’s go back to your Dad. Where did he grow up, go to school and spend his formative years?
BPJ: Dad grew up in and around Paron, went to school in Paron and maybe Robert E. Lee Grammar School, which is all the formal education he received outside a few course studies later. He was essentially self-taught in electricity and mechanics. His first paying job might have been repairing appliances as a teen. He then worked for some electric companies in Little Rock and North Little Rock until 1927. World War I almost saw him but the story goes that the armistice was signed while he was on his way to training camp.

FA: Do you know what inspired him to become interested in archery and what year was that?

BPJ: Dad read an article by Dan Beard, who was previously an illustrator for Mark Twain before moving on to other activities. Beard had many talents but is credited with starting the Boy Scout movement. Beard’s articles on archery appeared in the summer of 1926 and this was the same year Dad made his first real bow.

Dad worked for an electric company AP&L at the time (in rural electrification) and was on the road a lot but quickly became an archery fanatic, entering tournaments, making equipment for others, founding clubs, etc. With his background in electricity and mechanics, coupled with his love of wood, it just all fell in place for him. His idol was famed inventor Thomas Edison and he probably greatly admired Henry Ford and followed his career.

It was natural for him to be in a prime position to develop ideas for the mass production of archery equipment. Of course he did not stop with Beard for information; he found every piece of literature he could lay his hands on. He bought books by Thompson, Pope and Duff. He practiced, practiced, practiced his shooting skills and refined his equipment. He had become a well-known name in the 30’s and shot in national archery tournaments, placing as high as 7th in 1938.

FA: Was he interested in other activities like football, baseball, etc?
BPJ: He took our family to several football games and a few baseball and basketball games; he enjoyed watching televised broadcasts of these sports and boxing as well.

Duck, The Duck's Gonna Get Ya!

We Track The Duck's Wild Boar