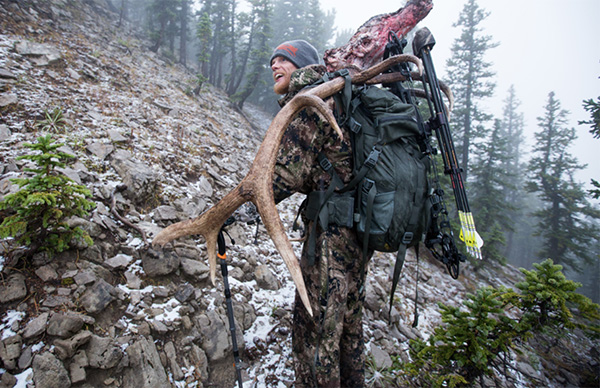 Camping alone on top of a mountain can be a fear inducing proposition. Sometimes you feel like you’re the perfect late night snack for a wandering hungry black bear. My senses were on hyper alert on those mountain hunts. A blade of grass or a thin limb brushing the fabric of my tent caused my heart to pound inside  my chest. Darkness led to fear until I felt I was the main character in a Stephen King novel.

Hunters push further and further hoping to unlock the numerous secrets of the woods. That curiosity can get us in over our heads and at times cause a paralyzing fear. As uncomfortable as it may be, following our curiosity and the challenges of the hunt creates an opportunity for personal growth. Before long, what we once thought of as impossible now resides right in our wheel house.

On September 2nd, the night before opening day of Montana’s archery elk season, curiosity, stemmed from years of my natural progression as a hunter and helping friends to pack elk out of some absolute pits around the state, had me hiking into a pit of my own. A basin that I had always shied away from due to its remoteness and the seeming impossibility of extracting an elk from. I made it to the trailhead at 10 PM. After a 4 hour hike to the ridge overlooking the basin, then 4 hours of sleep, I dove in at first light.

At last light that evening, during a raging storm, I snuck up on a wallowing bull and sent a well placed arrow at 40 yards. I was alone and 7 miles from my truck. The high of harvesting an elk quickly turned into that sobering “here we go” moment as I knew the next 48 hours would be an all out grind. 4 hours later I had the bull deboned and all the meat hanging. By 8am I got the first load of meat out to the trail head. It was an all-night slog with a short pitstop at my snow covered tent. Unbeknownst to me, my tent was leaky and inside my sleeping pad was literally floating in a pool of water. Lesson learned.

Thankfully I had two friends that eagerly drove 2 hours to help after getting my ‘bull down’ text. After enduring the wettest, snowiest conditions I’ve ever encountered in Montana, we got the remaining 250 pounds of meat out.

One final trip for camp and the skull with my Dad and my elk hunt was complete.

Things that are hard are undoubtedly the most rewarding. Curiosity has a way of throwing us right into some of the most challenging, testing moments of our lives if we let it. The reward? Well, let’s just say that as much as the pack out sucked, it was always greeted with a smile.

How To Can Your Wild Game Meat

Hot Weather And No Rain