A screaming crescendo of Madison's safari was the monster eland bull that weighed 2,000 pounds. 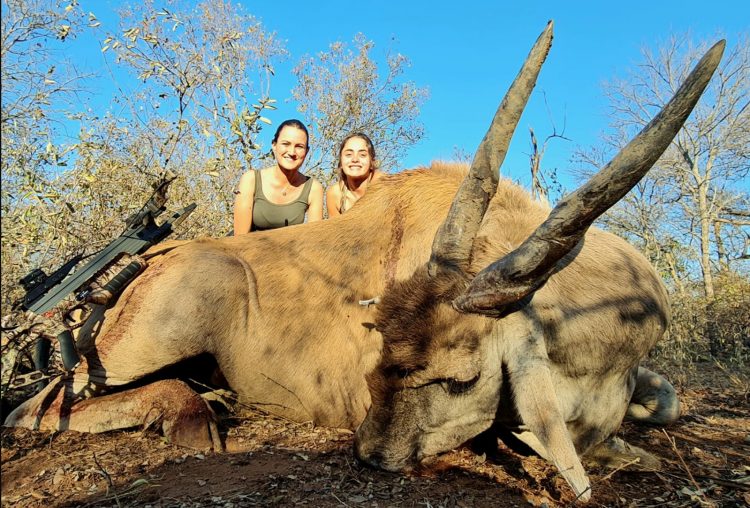 The screaming crachindo of her safare was the monster eland bull that weighed nearly 2,00 pounds.

I’m the author of “The Ultimate Guide to Crossbow Hunting” which still maintains a 4.5-star rating on Amazon.  I test crossbows regularly and had five brands in my basement to choose from.  In 2015, I convinced two hunting buddies to help test crossbow effectiveness on African games.  We each shot a different brand with variations of broadheads and arrows, but each used an Aimpoint red dot scope.  The safari was a spectacular success such that we took 15 animals with 15 arrows and downed game varying in size from a giant eland bull to less-than-deer-size species such as impala and bushbuck.

With this experience in my mind, I set up an Excalibur Micro-340 topped with a Burris FastFire 4 red dot scope.  Although I had much faster bow options, I knew that the 340 had plenty of penetration power and opted for the 150-grain Grim Reaper Broadheads expandable head for extra momentum and penetration.  The Micro 340 is compact, easy to cock and un-cock with enough speed that the bow could be sighted in for 22-yards and be within the kill zone from 15 to 30 yards.  The FastFire 4 provides a single aiming dot for precision shooting.

When the time came to introduce Madison to her crossbow, I was probably more nervous than she was.  Just as the Excalibur Micro 340 was an excellent choice for a first-time shooter, support gear required careful thought to ensure success.  The Final Rest head supported by a solid tripod gave the bow stability and greatly enhanced accuracy.

Additionally, I brought a Morrell Back-to-Back target that graphically illustrated the anatomy of African animals and allowed for realistic practice.  The built-in handle make the target very transportable so that Maddison could practice at multiple distances.

Realistic practice is crucial to any type of hunting and flying the Morrell Back-to-Back target turned out to be a wise decision.  African outfitters have great difficulty getting quality archery gear and most have modest target practice ranges at best.

I flew with the target and checked it like any piece of luggage and once in camp it provided excellent practice for Madison and for the seven other hunters in camp.  I used the TenPoint Nitro 505, the fastest production crossbow in America and another hunter had a compound bow set up for Cape buffalo and the Back-to-Back handled blistering speeds and heavy arrow momentum.  If you are planning an out of state hunt, consider putting this handy Morrell product in your gear package.

Madison shot an arrow or two each day to keep her form consistent, a practice that really paid off when an old impala ram appeared at the Leadwood blind and paused to drink.  Using a solid rest, Madison put an arrow right through its shoulder and the recovery was quick and easy.

With two days left in the safari, she shared the same blind with her father when a mature eland bull surprisingly showed up at mid-day.  Eland are notorious for drinking at dusk and archers frequently grind their teeth in frustration as these beasts show up after shooting light.

When the huge eland bull came into range, Madison’s dad grabbed his bow, but gave the option to his daughter, “Do you want to shoot?” he whispered.  Maddison’s smile signaled a resounding “YES!” and she took careful aim once again.    Harvesting the huge, 2,000-pound animal was the talk of the camp and she absolutely beamed with excitement.

In African waterhole ambush situations, using a crossbow is an excellent tactic.  Madison and her dad hunted with Rassie Erasmus of Louwlardus Safaris where a person sitting a waterhole often encountered a hundred or more animals in a single day.  Imagine being seventeen years old and sharing an African safari with your dad, a situation where these exciting adventures can be shared and relived countless times.  Madison didn’t know what to expect on her hunt yet taking three great animals was beyond her wildest dreams.

Author’s Note: Rassie Erasmus is a career bowhunter, PH, and former archery shop owner.  More information about Louwlardus Safaris is available on Facebook or from Rassie at bowhunt@Rassie.co.za