Can a high school senior shoot a crossbow on safari and have success?  Even if she has never fired one before? 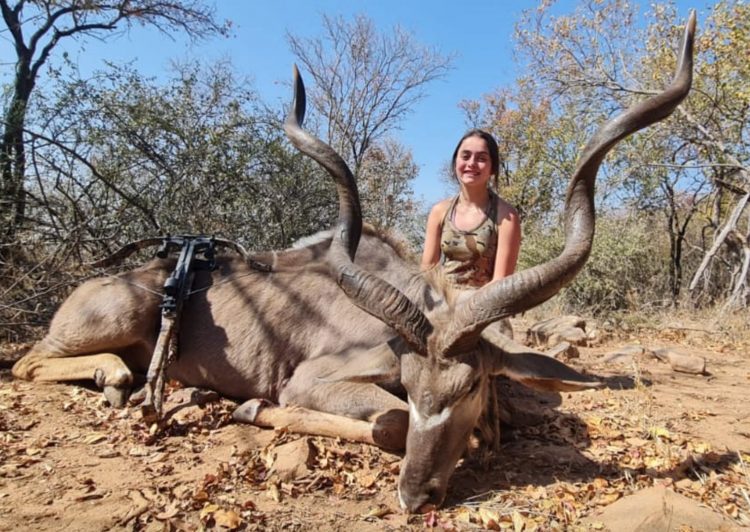 Can a high school senior shoot a crossbow on safari and have success?  Even if she has never fired one before?

“I’m so excited to take my daughter on this safari,” exclaimed New Mexico big game guide Lawrence “Grizz” Montoya.  “She’s a great shot with a rifle but has never fired a crossbow before.  Will that be a problem on an archery safari?”

If a person had never shot one previously, bowhunting with a compound bow or even a rifle would be unethical. However, does the same apply to shooting a crossbow if the person is proficient in firearm safety and skills?

Our safari with Louwlardus Safaris would be ambush-style hunting from permanent ground blinds or tree hides with shooting ranges from 15-30 yards and a Professional Hunter coaching each shot.  Under these conditions, I assured my friend Grizz that Madison would be successful.  If the 17-year-old could shoot an elk with a rifle, she could handle a crossbow.

“The Most Exciting Thing I’ve ever Done”

A kudu bull, the “grey ghost of Africa” is one of the most exciting game animals in the world and Madison got her chance on the third day of the safari.  With Professional Hunter Kristin Erasmus by her side, they traveled to the top of the mountainous Rock Haven concession in anticipation of spotting a particularly old kudu bull that met the property’s “management status” meaning it was past its breeding time.

August early morning temperatures are often in the 40’s and 50’s and animals don’t come to water until the sun rises and the bush heats up.  A parade of animals began drinking in mid-morning and by noon, Madison had thrilled to seeing groups of impalas, a troop of baboons, and Nyala females.  Suddenly, dad spotted an animal approaching and the PH identified it as a mature kudu bull with extra wide horns.

“My heart was beating so fast,” remembers Madison, her eyes beaming with excitement and drama as the kudu bull passed by at 20 yards.

Finally, the bull turned and presented a broadside shot and all the teen’s shooting practice came into play.  Putting the red dot in the crease behind the shoulder, she squeezed off the shot and the Grim Reaper tipped broadhead zipped through the big animal’s chest.  “Oddly, the bull walked about 50 yards, stood briefly, and died on the spot.  It was the most exciting thing I’ve ever done,” Madison told me.

HOW TO FIX PEEP SIGHT PROBLEMS!