Archers who call modern muleys dumb are generally those with little or no experience bowhunting them. 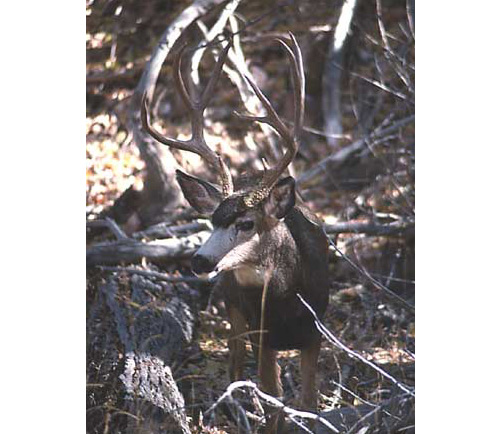 I don’t know who started the myth that mule deer are dumb animals. More than likely it was some gun hunting writers from the 1950’s and ‘60’s, back in the heyday of mule deer hunting, when deer numbers were sky high, hunter numbers relatively low, and a halfway serious hunter could tag a fine mulie buck nearly every season. Under those circumstances in the wide-open spaces where most muleys were found, smacking one with a .30-06 was a pretty sure bet.

On the other hand, bowhunting mule deer has never been easy, at least for  for me, and I’ve been at it since the early 1970’s. Way back then deer numbers were pretty high across the board, and locating bucks to stalk was more a matter of putting in some time and working at it than it was being Daniel Boone, or Fred Bear. I vividly remember one trip two of my college buddies and I made to the Ruby Mountains of Nevada back in the late ‘70’s. One sunny morning we glassed up 88 different mule deer bucks, most of them in the same large grassy bowl. Of course the combination of too many eyes, ears and noses, the archaic gear we had that limited my shooting to 30 yards max, and the lack of sophisticated spot & stalk skills we possessed did us in.

Since then mule deer have taken a beating. Habitat loss fueled by an exploding human population, mismanagement in some of the world’s great mule deer locales, and heavy predation by mountain lions, coyotes, and now wolves, have all reduced muley numbers well below those enjoyed by sportsmen when my dad’s generation was hunting them.

Those deer that have survived and thrived over the decades have evolved into a stealthy critter indeed. Mulie Bucks that live to be more than four years old are one smart critter, very nocturnal in nature and, like their whitetail cousins, most vulnerable during the rut or when they are still in velvet, during some of the early high alpine archery seasons that open in August. Then, though, they have the rugged high country wilderness as their ally, a place where most bowhunters just don’t have either the physical capabilities or the mental toughness needed to give them a run for their money.

Archers who call modern muleys dumb are generally those with little or no experience bowhunting them. Usually these are eastern or Midwestern whitetail hunters who would swear on a stack of bibles that their local bucks are so much craftier than the wisest muley that comparing the two is like a mental gymnastics meet between Bill Gates and Billy Carter. Not to dis a whitetail – a creature that has my utmost respect – but I have seen muleys do some amazing things.

One time I watched a very good mulie buck feeding below me on an oak flat when, without warning, his ears perked up and he bounded off into a nearby thicket and lay down. Ten minutes later I watched two bowhunters come plodding up the trail, not doing a very good job of being sneaky. They never had a clue that their dream buck was within spitting distance. Ten minutes after they had passed by, the buck came back out and resumed snacking.

Another time I watched as a buck one of my friends tried to stalk bound out of its bed when Don snapped a twig 50 yards away. The buck burst around a huge boulder and ran into some brush, then quickly hid like a late-season rooster pheasant. I could see its antler tips, and Don never knew where he went until I told him.

Then there was the whopper buck I saw belly crawl, head low to the ground, through thigh-high sage to escape the drivers on a muzzleloader hunt. The thing about modern muleys is when the pressure is on they are as apt to hide as to flee.

Spot & stalk hunting is the way I was weaned on hunting muleys, and it remains my all-time favorite bowhunting adventure. Yet I am the first to admit that stalking a bedded buck and getting a shot without him busting me is one of the most difficult games I know. Dry, crackly stalking conditions, thick brush, steep shot angles, stiff crosswinds, and the ever-present satellite deer combine to make putting it all together about as tough as sneaking a sunrise past a rooster.

It is so tough that many of the West’s best mule deer outfitters have taken to erecting tree stands or ground blinds over waterholes or along the edges of alfalfa fields to give their clients any kind of a chance at a bow shot.

But when it all comes together – how sweet it is! I can still see the fletching of the last arrow I shot at a big muley buck spinning in slow-motion through the bright Colorado sky. After six days of hard hunting I finally found him, then watched him bed in a deep, tumbleweed-filled coulee. Four hours of careful, slow-as-a-snail stalking got me to the edge, where I could see his antler tips above the brush.

Another 45 minutes of slithering gave me an open shot angle. The shot was longer than I would have liked, but that’s the way it shook out, and when I watched the fletching arc way over the buck’s back my heart missed a beat. Then it began descending, and the instant the broadhead turned over and began its downward arc I knew I had made the shot.

I won that day, but truth be told, mule deer win the battle with me way more than they lose it. That’s why they are such a special animal to those of us who love bowhunting in the west with all our being.?

Cliff Gray: Thermals In The Mountains

Tips For Glassing In The West