Bowhunting the Coues deer of Old Mexico as well as the idea of hunting south of the US border has always appealed to me.  Despite my reservations for hunting in Mexico I gave it a try.

by Roy Keefer
in Bowhunting Articles, Bowhunting Posts, Deer
1 0
A A
1 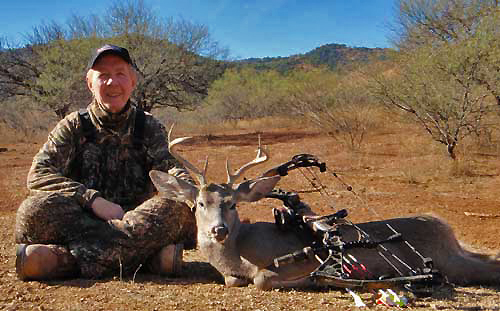 Many bowhunters are addicted to hunting whitetails, I’m no exception.  In the Fall I journey to three or four states and match wits with them.  As you may know from reading prior stories I’ve written, I’m always on the lookout for new bowhunting experiences.

I’ve bowhunted the elusive Coues whitetail in Arizona but nowhere else.  I’ve read articles about the Coues of Old Mexico and the idea of hunting south of the border has always appealed to me.  Despite my reservations of hunting in Mexico I decided to give it a try.

I worked on selecting the right outfitter for my hunt while periodically hearing and reading about the drug related crime in many parts of Mexico.  My wife, Shelby, was reluctant but ultimately gave in and agreed to go along to video my hunt.  Finally I settled on an outfitter in the Mexican state of Sonora.

December and January are pleasant times to be in Mexico.  The weather is cool but not unbearable.  So I planned my trip in January.  Shelby and met the outfitter in Tucson, AZ and parked our truck at the airport and got in his truck for the trek to camp in Mexico.  Crossing the border crossing was uneventful although one of our three trucks was inspected.  Bows, clothing bags and everything else was unloaded for inspection.

The hunting ranch was several thousand acres of rolling desert terrain.  A creek meandered through the ranch and overall the place was beautiful.  The outfitter told us we could expect to see some coatimundis, a strange looking ring-tailed cat and maybe an occasional mountain lion in addition to the Coues we were after. Since Coues were plentiful in the area, I wanted to try for a record book animal.  Hopefully, I could be a little bit selective and be successful.

Because Coues are extremely spooky, spot and stalking them is a real challenge.  We chose to hunt over water holes since we were bow hunting and needed to be close for a shot.

The first morning was cool, almost cold, as we climbed into our blind overlooking a “water hole”.  I emphasize water hole because at best it was a mud hole.  The winters are very dry in Sonora and the country is arid to begin with, so water is not all that plentiful.  The day was uneventful, some small bucks and does visited the water hole but nothing that I wanted to shoot.

We returned the next day and the “water hole” had gotten smaller and the water muddier.  After some time I saw a movement in front of us; a Coues buck was walking down the hill facing us and appeared to be moving to the water.  With each step you could sense the buck’s nervousness.  Coues are one of the main items on the mountain lions menu and they know to be careful when coming to water where they are more vulnerable to attack.

After several cautious moves to the water, the buck finally made it, quickly drank and started to move away before I could begin to draw my bow.  Believing my chances were diminishing with each step he took away from us, I grunted like a North American whitetail buck and he stopped.  When my 30 yard pin was on his shoulder I released an arrow.  He ducked at the sound of the bow and attempted to spin and run but the arrow hit him high in the spine dropping him instantly.

My buck may not be big by North American whitetail standards but he was large enough to make the Pope & Young Club record book.  The minimum score is 65″ and my buck scored 72″.

There’s still time to book your hunt if you want to try something different and see Old Mexico.  I think you’ll be glad you did.

Rainlessness In The Deer World

Backpacks For Bowhunters: The Right One For You

The Deer Woods Reacts To Our Rain Spell