On the morning of Sept. 17, the Vines heard elk bugling in the distance and closed the gap on one particular bull that was relatively close and sounded promising. 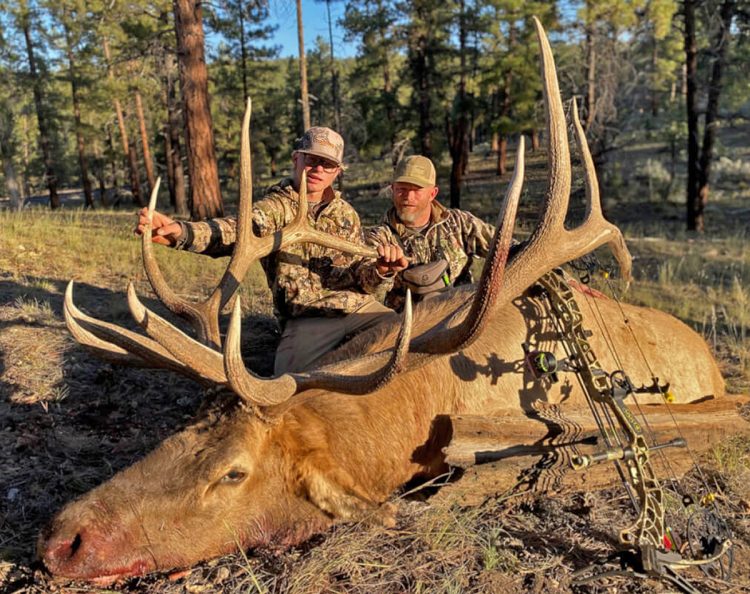 Most hunters only dream of taking a 400-inch-plus bull Elk, but if you happen to live and hunt in the right area, those dreams might come true more than once.

Although he’s only 16-years-old, Cody Vine of Greenhaven, Ariz., already has a monster bull to his credit, having tagged an 9×8 that scored 448 while hunting his state’s late rifle season a few years ago. The next step? Take a trophy-caliber elk with his bow.

After 5 years of applying, Vine drew a coveted Unit 9 archery Elk tag, a permit that many times takes much longer to pull.

“That particular archery tag takes residents usually 16 to 20 years to draw,” he said. “I just got lucky.”

Prior to the hunt, which took place in the Kaibab National Forest, Vine set a goal of harvesting a bull in the 375-inch range. Fortunately, his hunting partner would be his dad, James, one of the partners in and a guide for Shadow Valley Outfitters, an Arizona-based guiding service known for leading hunters to big bull Elk.

“Dad hunted up there for about 20 years,” Cody said. “This year we spent almost every weekend during the summer up there looking at bulls.”

Once the hunt began in September, the Vines hit the ground running, getting into good bulls right from the start. After pursuing one particularly large specimen that they could never catch up with, they ended up covering a good portion of the 1,600-square-mile unit looking for a trophy-caliber bull.

“I think I passed on probably 80 or 90 bulls in seven days of hunting,” Vine said.

On the morning of Sept. 17, the Vines heard elk bugling in the distance and closed the gap on one particular bull that was relatively close and sounded promising. In response to to James’ cow calls a massive 7×6 that came into 12 yards, presenting Cody with a good, close shot. At approximately 7:10 a.m., Vine let loose an Easton Axis 4MM Long Range arrow from his Mathews V3X, with the Rage Hypodermic Trypan NC broadhead sealing the deal.

Cody said, “He ran probably 35 or 40 yards and we heard him crash. When we walked up to where he ran we saw him instantly. He didn’t go anywhere.”

As they approached the downed Bull, it was the first time Cody had an opportunity to see how large it truly was.

“So, I took aim and shot and I never got to see the points. And, when I walked up to it, it was crazy — the bull was so big. It was way bigger than I could have imagined.”

Looking back, Vine said the hunt was an incredibly cool experience, especially since he was with his father.

Vine said one of the keys to their success was going hard all day long. While he noticed some bowhunters were returning to camp by 9 or 10 a.m., he and his dad continued to cover ground from sun-up to the last rays of light.

“We were out all day, every day, and we were always on bulls, and they were always bugling,” he said. “You had to get in close to them and then start talking to them.”

“I was hoping for something like a 380 bull,” he said. “I passed four bulls on that hunt that were like 360 to 370. I just wanted one that was one step bigger, but this one is quite a few steps bigger.”