It’s All About The Well Placed Shot

Wait for the ideal bowhunting shot – one that’ll result in a deadly double-lung hit.

by M.R. James
in Bowhunting Articles, Bowhunting Posts, Deer
1 0
A A
0 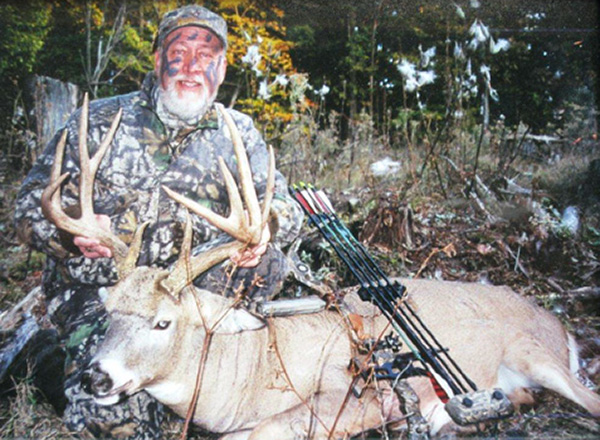 Before dark two bucks step from the shadows of a tangled swamp thicket and walk my way. One whitetail is a juvenile fork horn, but the lead deer is a blocky, heavy-antlered 9-pointer with a muley’s Y-fork on his right beam. By luck, they pause broadside in a trimmed shooting lane near my treestand to watch a parade of does file down an old logging road off to my right.

Seated in my treestand 16 short yards away, I ease to full draw and center my top pin on the big buck’s ribs. His full attention is on the does until my arrow zips cleanly through his chest. Lunging ahead, he veers sharply to the left and crashes back through the brush toward the security of the swamp. But he doesn’t make it.

His legs go rubbery and he crashes down in a kicking heap not 40 yards from where I’d watched his death run in stunned amazement. Even after half a century spent prowling deer woods all across North America, I’m still awestruck each time I see the effectiveness of a scalpel-sharp broadhead and a well-placed shot.

Want Similar Results?
For my money, having witnessed hundreds of arrow impacts on a virtual Noah’s Ark collection of critters, there’s no better shot in bowhunting than arrowing a relaxed, broadside animal and getting a double-lung hit. Send sharpened steel through both lungs of any big game animal on earth and the typical result is massive hemorrhage and short blood trails. Whether it’s a half-ton bull moose or big black bear, an elegant elk or burly one-ton bison, any animal will be literally dead on its feet from the time its tender lung tissue is penetrated by a finely honed hunting head. Count on it!

Sure, a spine shot can drop an animal where it stands, and a severed femoral artery can create an awesome blood trail. But those are mostly lucky shots. Miss by only a fraction of an inch and the results can be a long tracking job and often an nu-recovered game animal.

Again, and it’s worth repeating, your best aiming point is the rib cage at any angle which allows both lungs to be punctured. It’s like letting the air out of a balloon. When the lungs go flat and can’t pump oxygen, the animal dies. Period.

Such news is hardly revolutionary. It’s been around in oral and printed form since Bill Wadsworth founded the National Bowhunting Education Foundation back in the late 1970s. “The lungs are best and easiest vital hit,” reads the NBEF deer hunting manual. “A hit in the chest cavity will probably result in excessive bleeding, a good blood trail, and a dead deer – your deer!

“Pretend you are able to place a shiny half dollar on that deer anywhere you want. Place it in the center of the lung area and shoot at the half dollar, not at the whole deer or even the whole lung area.

“A quick way to select your shooting spot on a deer is to draw an imaginary line from tail to front disregarding head and neck. Do the same vertically at midsections and then shoot about four to six inches ahead of where they cross. Complicated? No, it makes you pick a spot.”

That’s excellent advice whether you’re a newcomer to bowhunting or a veteran bowman wanting to shorten blood trails and consistently recover arrow-hit game. Remember, simply hitting a stationary, broadside animal should never be your goal. Your goal is hitting him dead center in the imaginary half dollar-sized circle marking the middle of his lungs.

Even if you’re slightly off target, whether due to pulse-pounding excitement or some slight error in range guesstimation, a low chest hit can slice through the heart muscle or major its connecting arteries. Strike a wee bit back from center and cutting the blood-rich liver will eventually prove lethal, though it takes longer for the animal to die. Shoot slightly high and you’ll still hit lung tissue or perhaps the large artery running under the spine. Hit forward of center and you can still cut the lungs.
That’s why most bowhunters I know agree that sending an arrow through both lungs is the only sure-fire shot to take.

Finally, here are three key points to keep in mind before releasing any arrow:

First, always use the sharpest broadhead you can find. Personally, I prefer 125-grain fixed or replaceable blade heads with 3 or 4 cutting surfaces and a minimum width of 1-1/8 inches. But I also recognize that there are dozens of excellent, highly efficent broadheads availible to suit any bowhunter’s perference and need. As I’ve often said, “I don’t really care which head you use, just as long as it’s well-built, straight-flying, and razor-sharp.

Second, be confident you can make the killing shot. I’m convinced that once shooting basics are mastered, bowhunting becomes 90 to 95% mental. What I mean is shooting and hoping is a recipe for failure and disappointment. Shooting and knowing you’ll hit your target where you’re aiming is what makes the difference between consistently successful bowhunters and wannabes with more excuses than antlers on the wall. Shooting well under pressure isn’t easy, but it’s necessary and that challenge is part of the bowhunting’s special appeal.

Third, shoot smart. Learn your effective shooting range and resist the urge to take long or iffy shots that exceed your ability. Wait for the ideal bowhunting shot – one that’ll result in a deadly double-lung hit. I’m convinced that if all bowhunters would follow these simple bits of woodland wisdom, lost and unrecovered animals would become as rare as gobblers with 6 beards.

And that’s bowhuntin’ gospel straight from the Book of James!

About The Author:
Best known as Editor/Founder of Bowhunter magazine. M. R. James is a past president of the Pope and Young Club and current president of the Archery Hall of Fame. He has served on the Bowhunting Advisory Council of North American Hunter magazine for more than 30 years and appears regularly on “Dead Down Wind’s American Archer” TV show, hosting the “Thoughts-N-Tips” segments. An award-winning writer and Hall of Fame bowhunter, James has authored seven bowhunting books and thousands of newspaper and magazine features. He and his wife Janet live on their farm in the rolling hills of southern Indiana not far from where he tagged his first P&Y whitetail buck in 1963.

What Is The U.S.A.'s Whitetail Deer Population?