From rooting up crops to destroying farm and ranch infrastructure feral Wild Hogs do damage of $91.1 million in Louisiana alone. 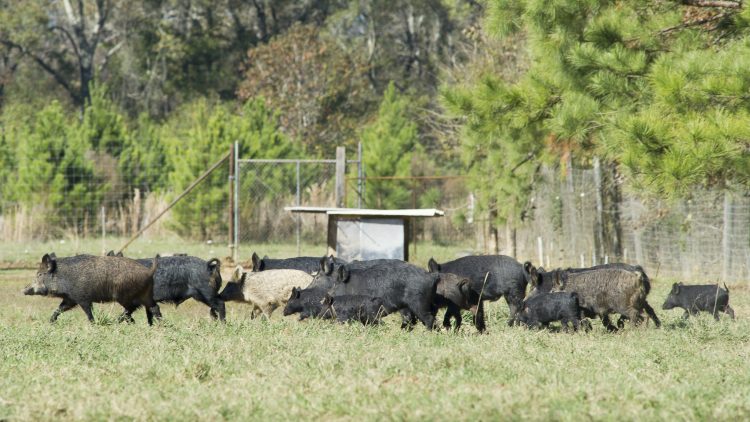 According to a newly released LSU AgCenter estimate.  Louisiana’s growing population of feral hogs causes $91.1 million in damage to agricultural and timber lands each year.

Based on responses to a 2021 survey, the study found that hog damage costs landowners $66.2 million in crop losses and $24.9 million in other expenses annually. More than 950 people completed the survey, representing nearly 660,000 acres of crop fields, pastures and woods.

The wild hogs cause a myriad of problems to Louisiana agriculture, an industry worth $12 billion annually. The hogs root up, wallow in and trample crops, tree seedlings and wildlife food plots. They also are known to wreak havoc on pastures, drains, levees, fences and waterways.

“Feral swine continue to be a growing problem to farmers, ranchers, foresters and landowners in many areas of the U.S. and are considered to be one of the most damaging invasive species in existence,” wrote study authors Michael Salassi, associate vice president and program leader for plant and animal sciences; Melissa Cater, director of the Northeast Region; and Glen Gentry, director of the Doyle Chambers Central Research Station and the Bob R. Jones-Idlewild Research Station.

Feral hogs have been part of the American landscape since the 1500s, when early explorers and settlers imported swine as a food source. Free-range livestock management practices and escapes from enclosures led to the first feral hog populations taking hold.

In the 1900s, the Eurasian wild boar was introduced to some states for sport hunting. Modern feral swine are a combination of escaped domestic pigs, wild boars and hybrids of the two.

Found in all 64 parishes of Louisiana and at least 34 other states, feral hog populations have exploded in recent decades. In 1982, an estimated 2.4 million feral hogs lived in the United States. Today, experts believe that figure could be as high as 9 million.

The Louisiana Department of Wildlife and Fisheries estimates between 700,000 and 900,000 of the animals live in the state. Many of the AgCenter survey respondents said they feel the number of hogs has grown on their properties in the past few years.

Feral hogs multiply quickly, with sows able to have two litters of five to six piglets per year. They have few natural predators and can thrive in almost any habitat, whether it be a tidal marsh or a hardwood forest. Their rapid reproduction and resilience make population control difficult.

“Statisticians have estimated that approximately 70% to 75% of the population must be harvested to control feral swine numbers,” the authors wrote. “In Louisiana, hunters harvest less than half so populations continue to grow.”

The study indicates annual production losses were greatest for sugarcane, rice, corn, hay, soybeans and timber. Those losses ranged from $6.9 million for timber to $14.8 million for sugarcane.

About a quarter of the 952 respondents reported damage to pastures, something the study leaders estimate to cost $5.4 million statewide annually.

Some other loss estimates of interest include replanting damaged crop fields at $5.6 million, damage to drains and levees at $4.3 million and redisking damaged fields at $2.3 million.

Nearly 70% of survey respondents said feral swine had interfered in some way with their farming operations in the past year. And a majority expressed concern for the safety of themselves and their families, pets and livestock.

“Although feral swine generally prefer less interaction with humans, their rapidly expanding population and constant search for food sources is causing increasing interactions with producers and foresters on agricultural lands,” the authors wrote.