Nicknamed “Mufasa” by the group, a growing collection of information and trail cam photos helped them piece together clues on the whereabouts of the buck. 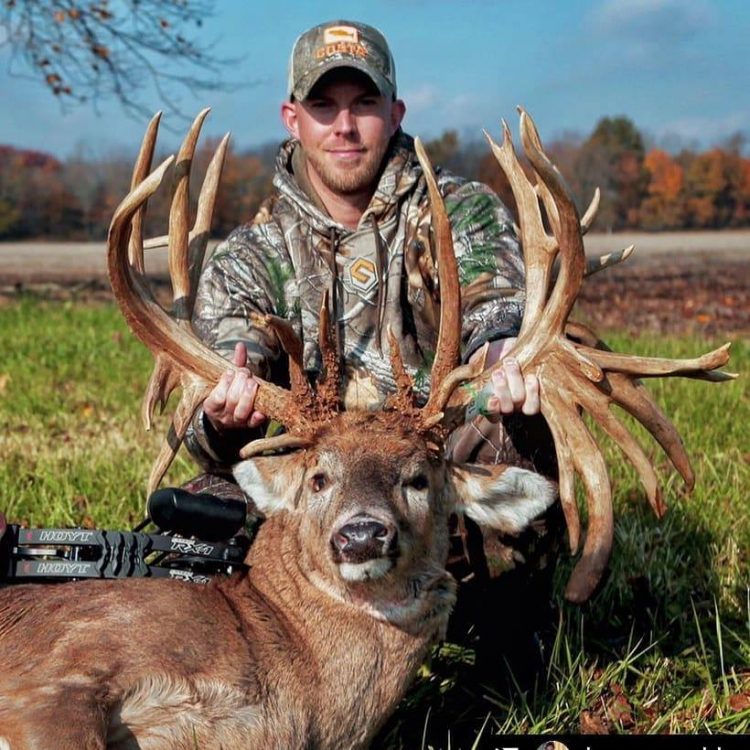 When Luke Brewster got into bowhunting Whitetails it was a simple pursuit to put venison in the family freezer as well as a chance to spend time in the Illinois woods.

A Marine Corps veteran who served two tours of duty in Afghanistan, the Virginian enjoyed being in the outdoors. “My dad (Jim) black-powder hunted for whitetails and I went fishing with him a lot over the years,” said Brewster, who lived in Bristow, VA with his wife and daughter.

After his military discharge from the Marines, Brewster went deer hunting with a friend. He didn’t fill a tag on that hunt but he was excited to see does and wanted to hunt more.

When one of those friends invited him to go hunting with him at his mom’s property, Luke borrowed his Dad’s rifle and went deer hunting. He fell in love “with how peaceful and quiet it all was.”

Soon after he purchased a compound bow and learned to shoot. In 2015 Luke drove to his father’s land in Illinois which was a good area for Whitetails. He met Brent Cearlock, Justin Cearlock, and Ron Waggoner, friends of his family, and they quickly became Brewster’s deer-hunting mentors as he continued his bowhunting journey.

They showed Luke how to hunt deer in the Midwest, which is very different than hunting in the big woods (of) Virginia.” The four hunters quickly became good friends who shared common deer hunting ground.

They also shared the whereabouts of a giant buck that began to frequently show up on that local Midwestern turf. Nicknamed “Mufasa” by the group, a growing collection of information and trail cam photos helped them piece together clues on the whereabouts of the buck that turned from being a good wall hanger into a unique whitetail Buck that could rewrite the deer hunting record books.

How To Make A Perfect Venison Steak