by Justin Cearlock
in Bowhunting Articles, Bowhunting Posts, Deer
1 0
A A
0 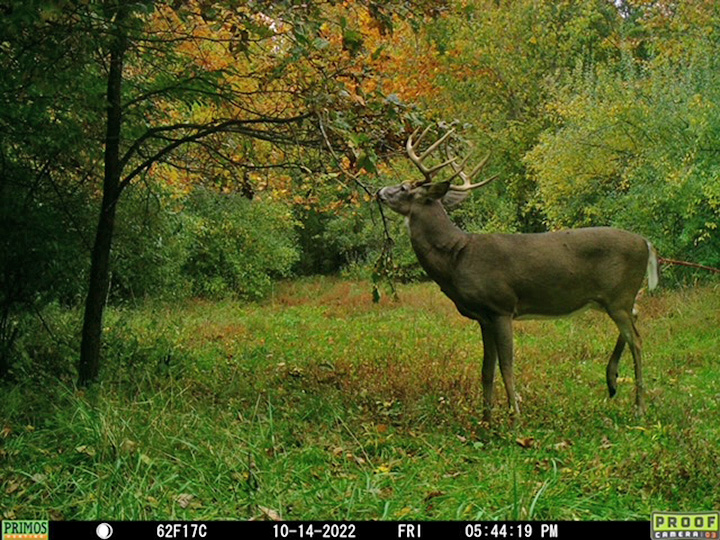 October 27th, 2022 Morning Hunt
The morning didn’t start off like I would have liked. As I’m putting my outer layers of camo on at the back of my truck, in the dark, I realized I forgot to clean my clothes off after my last hunt. I had gotten down early to scout a small piece of property where I had recent trail camera pictures of 2 good bucks.

So, I ended up walking through a bunch of stick tights and there must have been a thousand of them stuck to my pants and coat.  Every step I took on the way to my stand sounded like I was pulling two pieces of velcro appart. Once at the stand I decide to put some EverCalm on a couple of nearby trees.  I forgot that I had already tied my pull up rope to my bow and I ended up wrapping about 20′ of it around multiple trees.

I got the rope untangled, climbed up the tree and and as I’m finished my prepwork in the treestand I nock my arrow, but I pushed it too hard onto the string and activated the lighted nock.  By now all I can do is shake my head.

Hard to believe I’ve been doing this for 30 years!

I spend the next 20 minutes of dark and the first 30 minutes of daylight cleaning the stick tights off my clothes as quietly as possible. The first deer I see is a doe. As I turn to see her on the other side of the tree she spots me moving. She starts to stomp and blow at me.

Like all hunters I just cringe when this happens.  It’s inevitable that I’m going to spook a deer occasionally, but you always hope they run off silently or with a single snort or two.

Not this girl.  She stomped every step for 20 yards or so, blew and repeated the snort every time she landed as she bounded away. Then she stopped, turned around and repeated the process.  3 times. I’m questioning why I even went hunting this morning.

After 10 minutes of this I see a doe and fawn coming towards me from a different direction. The new doe stares at the first doe and begins stomping at her.  A few minutes of this and I hear a grunt. But I can’t turn to see what it is because I am pinned down by the original doe.

Then the 5 x 6, that I am hoping can make it one more year, appears at 20 yards from behind my tree. He pushes the second doe and fawn off and then comes back and starts to grunt and even snort wheezed at the doe making all the noise.

I was using my phone and had stopped it because the buck was behind a tree for so long. He eventually noticed something funny in my tree and moved back 20 more yards, but he never winds me and spends the next 15 to 20 minutes within 40 yards of me.

Then he starts to walk away. However, another older, but much smaller racked buck comes in and asserts his authority overy the 11 pointer. The older buck eventually escorts him off in the same direction the original doe left.

30 minutes later I hear a deer blowing in the distance from the same direction.  I would bet money it was the same doe.  I’d like to think that all the comotion the doe made actually attracted both bucks.

Through the years I have witnessed does blowing at bucks that are harassing them, multiple times.  Usually the doe will end up blowing multiple times over a longer period of time. There is a chance that I might have seen both the bucks without the doe making all the noise, but the next time I have a deer blow at me in the stand, as I start to cuss myself, I will try to will myself to believe that it could possibly turn into a good thing.

After the hunt I picked up the trail camera pictures from an active scrape. Here we go…