John Askew and I invited His Daughter Emily And Her Husband Colt To Bowhunt With Us. 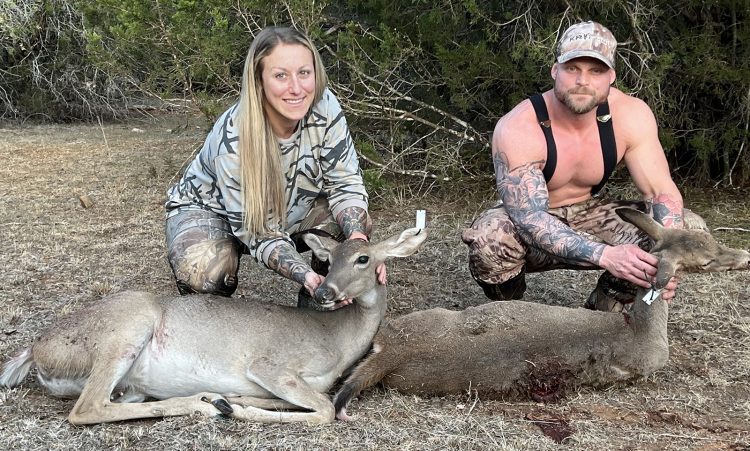 Our Deer Lease is for bowhunters only and all members are allowed to have one guest at any time to come and bowhunt the member’s stands. This year, long time members John Askew and myself invited his daughter Emily and her husband Colt to join us bowhunting deer. While members can hunt and tag bucks that is not the case for guests, they are limited to does only. However guests are welcome to bowhunt all the wild hogs they want to as well as one wild turkey gobbler.

Emily has been coming along with John to the lease since she was in grade school. She enjoyed going along on hunts as well as being in camp and in the outdoors.

It’s been a pleasure to see her grow up to adulthood and have a family. A few years back she became interested in bowhunting herself and has become good at it.

“Colt dropped me at the tripod stand at the rock ledge. By about 5:00 the deer began to come into the visible area. Two does with a button buck and a fawn  hung around eating acorns and other browse for about 30 minutes.

Then all but the two does left and I decided to shoot her. When she got in the clear between two trees I drew my bow and took the broadside shot. The doe dropped in 15 yards.”

After dropping Emily off at the rock ledge area Colt drove to the area he was assigned to hunt, but paused briefly to visually check the area and treestand. Everything was ok and he drove a ways and parked behind some trees. When he got back to the stand site he noticed there was already a doe in the area. Colt knew he might scare the doe off while getting into the stand so he pressed onward toward victory very carefully and quietly, working his way up to and into the treestand. As he was getting his gear situated before he could sit down a second doe had walked into the area and saw Colt because he wasn’t seated yet. The doe spooked and ran into the nearby thick cedars. As soon as Colt was ready he sat down to wait.

A short 5 minutes later two does came in from behind him. He drew when a doe passed the tree he was in. But then the doe had her back to him so he had to wait for a shot opportunity. The wait seemed an eternity with his bow fully drawn and Colt finally grunted at the deer, to try to get her to turn broadside. It worked and once the doe turned Colt aimed and let his arrow fly. It was a clean pass through. Colt blood trailed the doe for approximately 200 yards and found her crashed in the brush.