"I have a lot of time invested in going through old trail camera pictures to make this bowhunt happen."

by Justin Cearlock
in Bowhunting Articles, Bowhunting Posts, Deer
1 0
A A
0 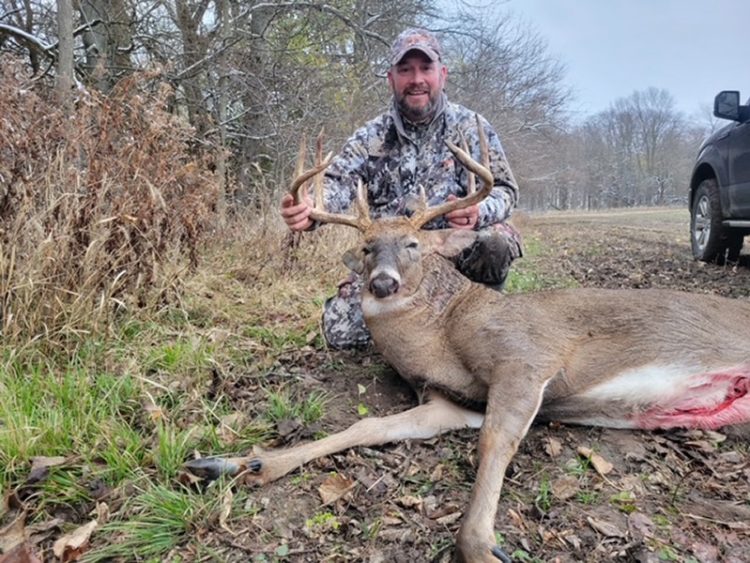 I was blessed with the opportunity to tag one of our target bucks, “Mr. Crabs”, on November 12.  My brother Brent Cearlock and I  have 4 years of trail camera pictures of him and feel confident he was 5.5 years old this season. My first encounter with him was an evening hunt on November 7th.

I was bowhunting the south edge of a wood lot overlooking the wooded bottom and a picked corn field to my south. It was a north wind that afternoon so my scent was blowing out over the picked corn field. With about an hour and a half of daylight left, deer started filtering out into the picked corn field about a 100 yards east of me. 30 minutes later Mr. Crabs stepped out. He spent the next 50 minutes checking out each doe and freshening a few field edge scrapes.

With about 5 minutes of legal light left Mr. Crabs finally started working his way west towards me. He covered the distance quickly and with 2 minutes of legal light he was broadside at 30 yards. I was at full draw, but felt uncomfortable taking the shot due to the lack of light. I let down my bow and let him walk by.

Fast forward 5 days: I’m hunting the same property about 600 yards northeast of my November 7th bowhunt. This hunt I am on the east edge of the timber with a picked bean field east of me and a west wind blowing in the woods toward known bedding area.

I picked this stand hoping to catch one of our target bucks between does and scent checking the downwind side of the bedding area. I settled into the stand at 11:45. By 2:00 I had passed 2 different 3 year old bucks and a few does. I even texted my hunting buddies saying the bucks are doing exactly what I hoped, I just needed one of the mature bucks to do the same thing.

At 2:15 I caught movement south of me. I noticed the width of the rack and was sure it was 1 of 2 bucks. One of those is a really good 4 year old that Brent and I have decided to pass in hopes he can make it another year.  So I needed to confirm that it was not that buck. The buck moved behind a large hedge tree and continued to walk straight towards me.

Once he was visible on the other side of the tree he was less than 20 yards from me. I could see the split G2 that confirmed it was Mr Crabs. I made a soft grunt with my mouth to stop him. He paused at 12 yards and I made a good shot.

I heard him crash just out of sight and sent quick texts to my wife and then my hunting buddies.  Brent was not hunting that evening and was happy to come help. The issue with that is both of us are red/green color deficient and have a very hard time seeing a blood trail.  Talk about a helpless feeling.  It’s very frustrating to have everything go right and then have to find someone else to help find your deer.

We agreed that his son, who is not color deficient, would come with him.  While they were on the way, I avoided where I felt the deer had run and went to look in the area where I thought he went down.  He was less than 80 yards from where I shot him.

Brent arrived shortly after.  We took some pictures and started the short drag to the field edge.  As we were dragging I asked Brent how many times he thought we had done this.  Neither of us came up with a number, but I hope that number continues to grow for many more years.