He paused at the edge of the cedars, their branches were in front of him. He was 18 yards from me. His attention was totally on the 3 does. 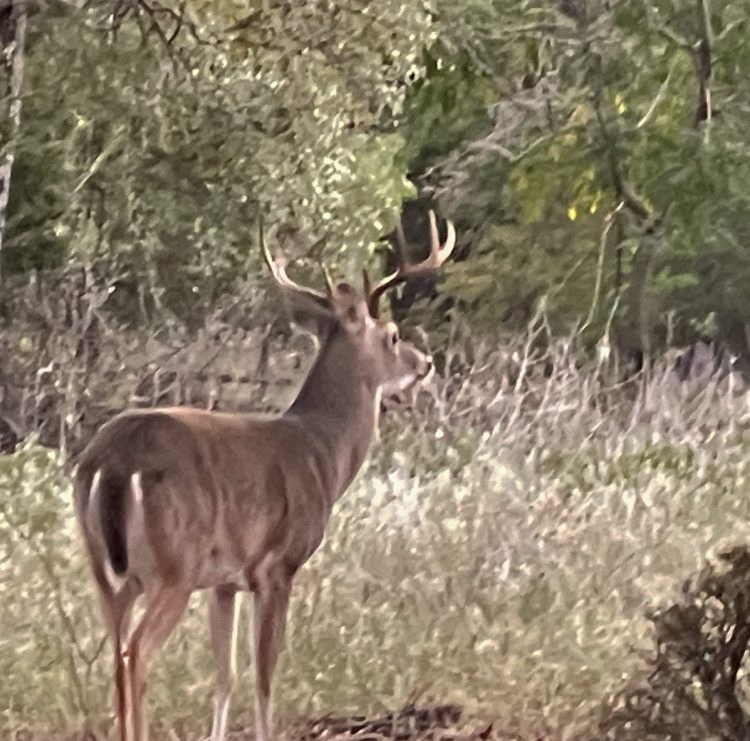 The instant after Big 8 made a move in my direction I snatched up my Minolta camera with the intention of getting him in the viewfinder and then zooming on him to take as many pictures as I could while he was on the way down.

The side of the valley he was on has lots of both cedar and young hardwood trees. Smallish openings are in in the trees and brush and I could see Big 8 pass through or close to the openings. However, he was not in an openings long enough to get him in the the view finder and in focus.

When he was halfway to me I set the camera down and got it going with the crossbow. A tripod gadget called a Bog-Pod holds the crossbow in shooting position, and when it’s time for a  shot the Bog-Pod is easy to move vertically and horizontally so you can take your shot.

There is a line of cedar trees that he got behind and followed in to a space I had trimmed out so I could take a shot in an obstructed shooting window. I was ready, with the stock firmly against my right shoulder and I had him in the scope sight and my finger was lightly touching the trigger.

He paused at the edge of the cedars, their branches were in front of him. He was 18 yards from me. His attention was totally on the 3 does. And they were spread out between me and him, on full alert and watching him intently. If he stepped clear of the cedars and paused a moment I was in the game. If he immediately charged at one of the does it would be tough to make that moving shot.

I waited silently, motionlessly. I was on full alert too, but a different kind of alert.

One of the does stepped closer to him  And he stepped clear of the cedars and postured with his best big-buck look.

I took my shot.  He spun and ran for 60 yards, passing by my Moultrie Mobile game-camera. It took his picture.

Big 8 paused 60 yards from me. I watched to see if he would lose his footing. He didn’t and walked to a group of trees along the edge of the gulch.

And disappeared into the trees.

CONTINUED TOMORROW: THE SEARCH FOR BIG 8

The Search For Big 8

The Search For Big 8