As high hunting pressure firearm seasons come to an end, count on bucks seeking the thickest cover around. 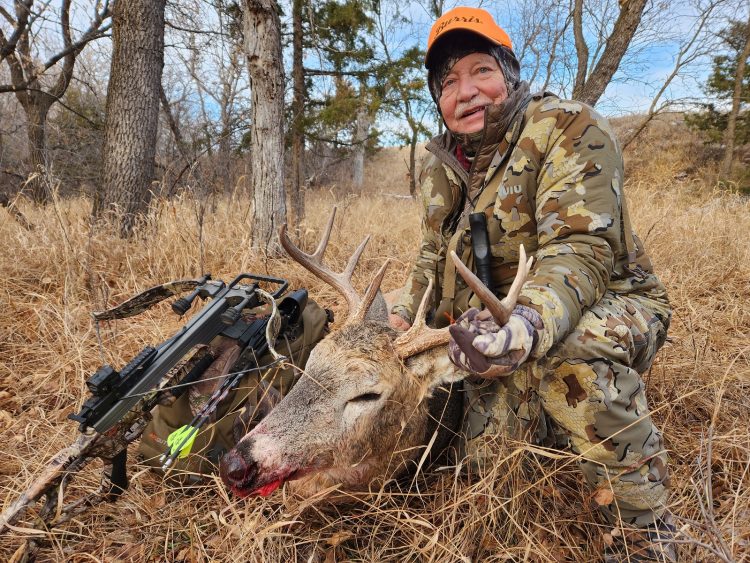 A crossbow can be an advantage in late-season hunting.  I just took my fourth buck in five seasons while hunting the thickest cover I could find.  I was counting on rifle hunters to push deer into a dense creek bottom where bucks often chase does and avoid human contact.  Bagging this respectable 8-point took less than 90 minutes using a handful of think-thick tricks that worked even during a firearm season. 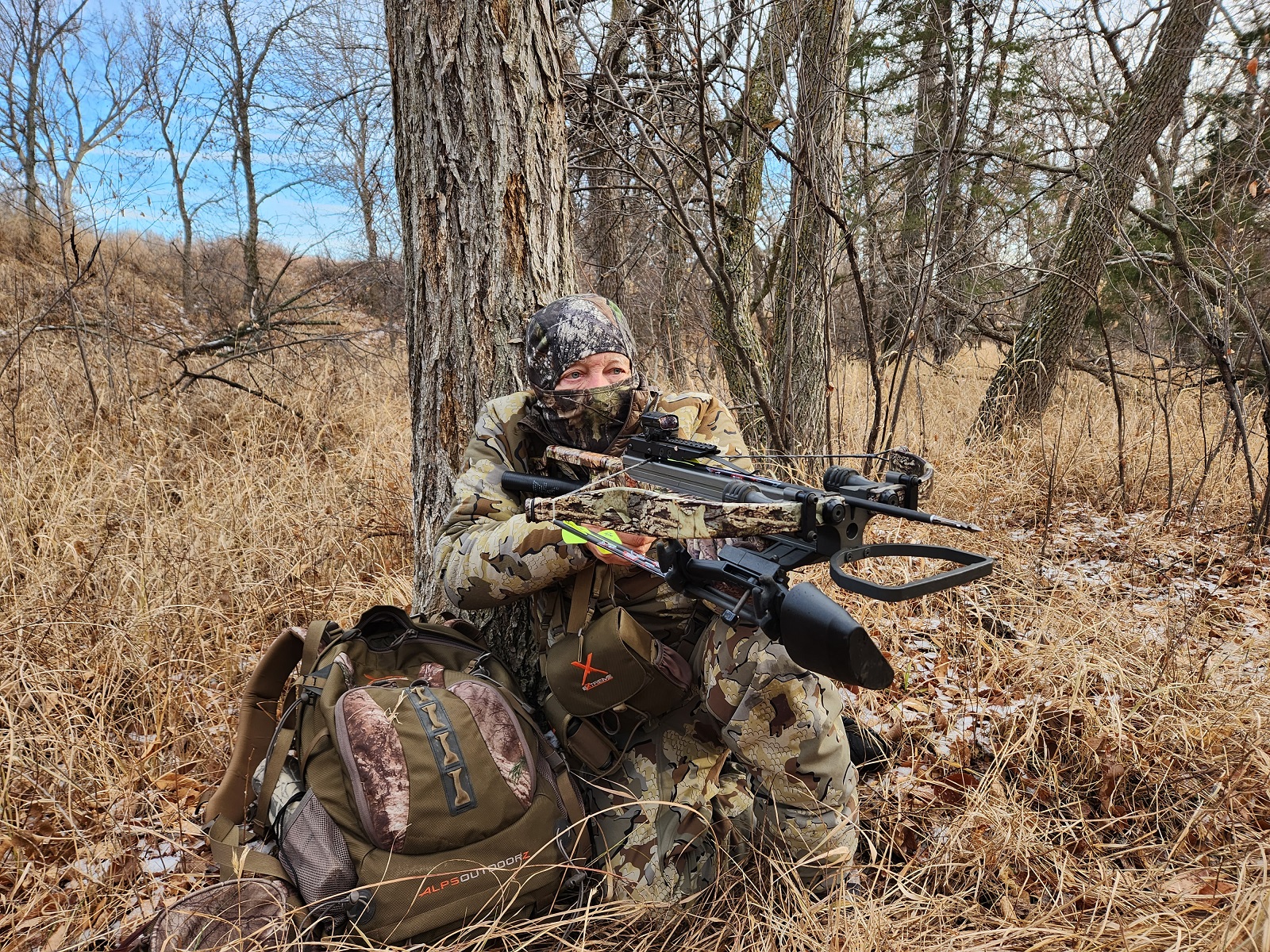 Many bowhunters feel naked without a tree stand or ground blind to conceal their location, yet I’ve had great success hunting from the ground.  The key is to find areas of deer movement where trails, rubs, and scrapes show evidence of deer movement.  I wear full Kuiu camo as shown in this picture, but also wear an orange hat to comply with local regulations.  Once you are in thick cover, your camo will blend in and you will be surprised how “invisible” you become to deer. 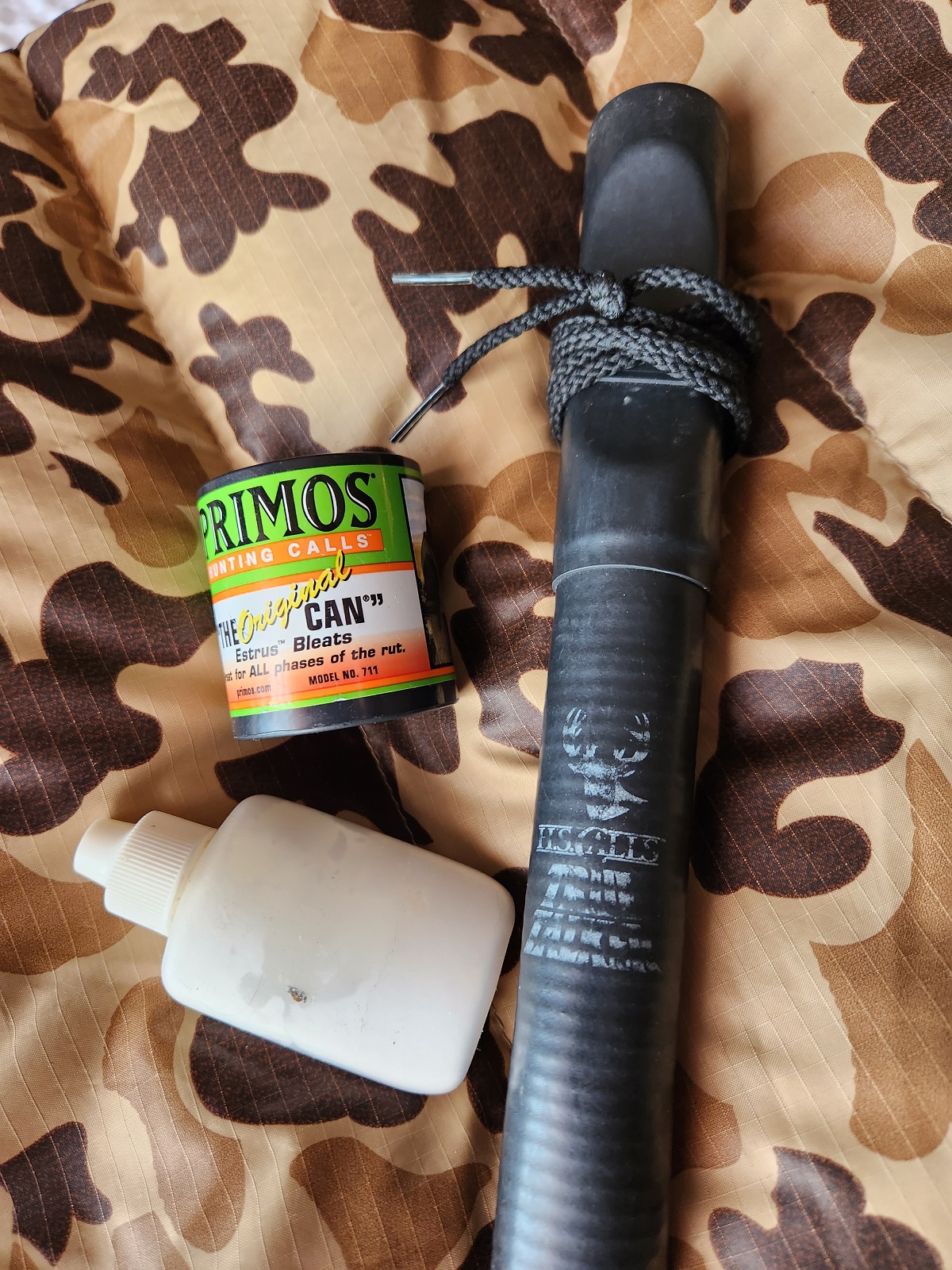 Don’t just wait for deer, lure them in with calls.  These are probably 20 years old, yet they are tried and true.  My HS Strut TruTalker is an amazing grunt tube and the Primos doe bleat makes a perfect call every time.  My scent indicator is so old the labeling has worn off.  A grunt tube can lure in a buck and calm down a doe, in case a doe sees or smells me. I grunt after it snorts and she usually calms down and goes about her business.  Sometimes a doe blowing and the sound of a buck grunting will actually attract a buck. 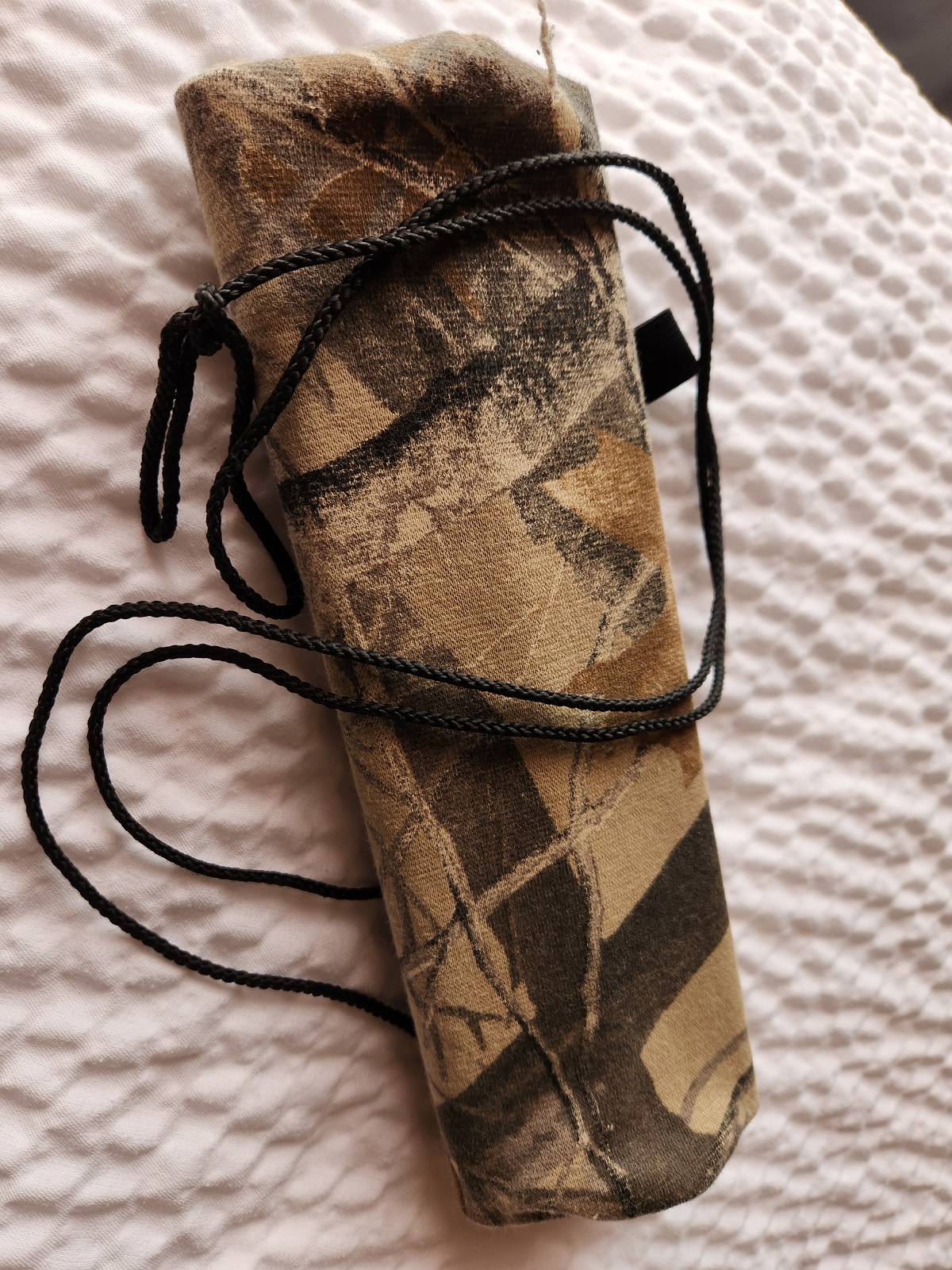 This rattling bag is so old, the cloth is nearly worn through, yet it lured in two bucks this November.  I just read the research that said that loud rattling works three times better than a softer version.  The wooden planks inside this bag sound realistic, fit easily into the side pocket of my pack and don’t mash my fingers.  If you use real antlers, you will quickly learn to be careful when your flesh gets caught between bones.  The research also said that rattling works best in the post-rut, the rut, and the pre-rut in that order. 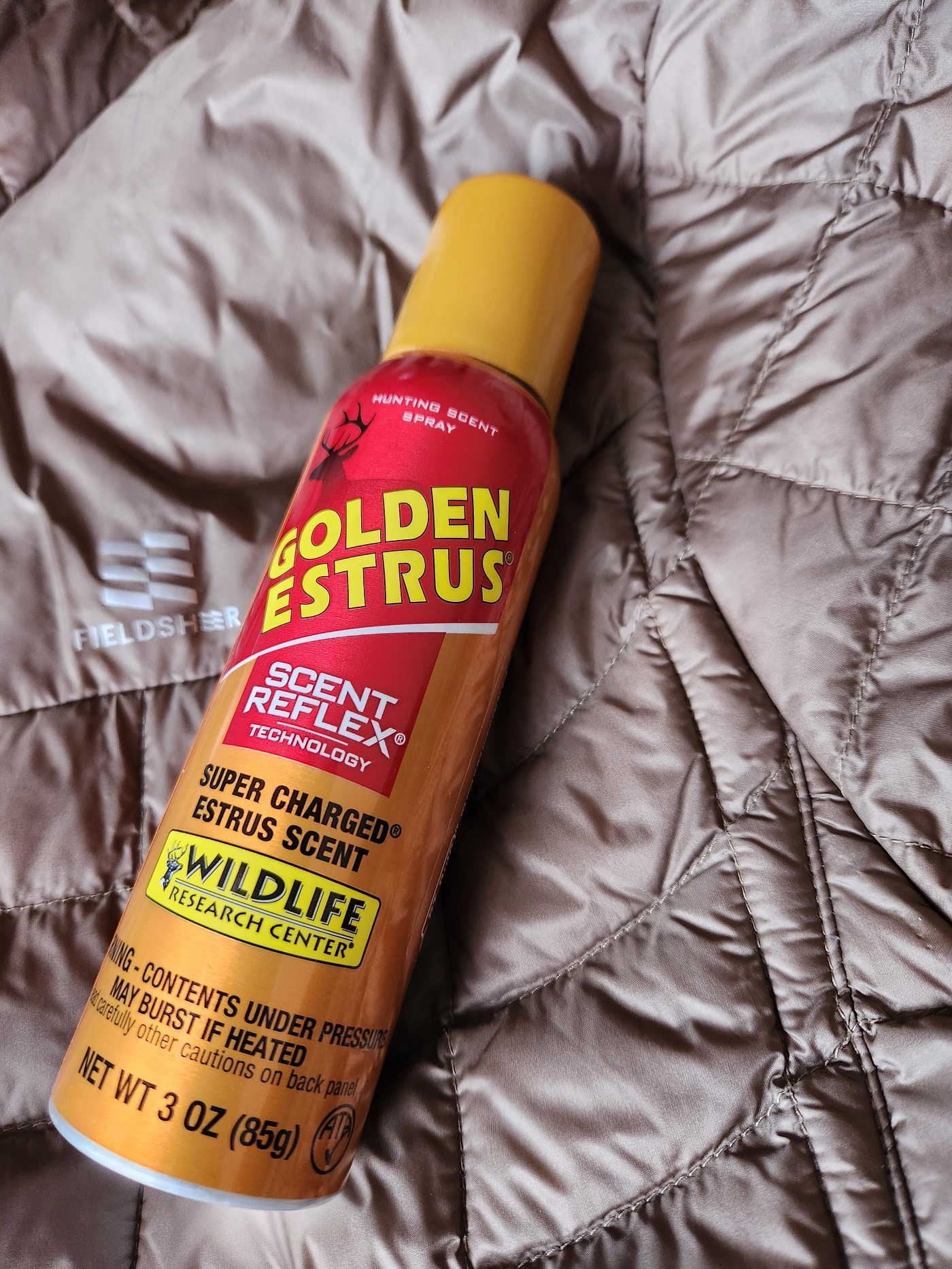 I shot this 8-point at 10 yards and it never knew I was in the area.  As it approached, the buck kept raising its nose and sniffing the air, apparently catching a whiff of the Golden Estrus that I had sprayed on a scent wick and vegetation.  I also, spray Golden Estrus on the ground as I approach a stand, rub the bottom of my boots in it, and lay down a trail.  If you do this, be careful not to walk directly to your hunting spot, but circle in front so that the buck will give you a passing shot. 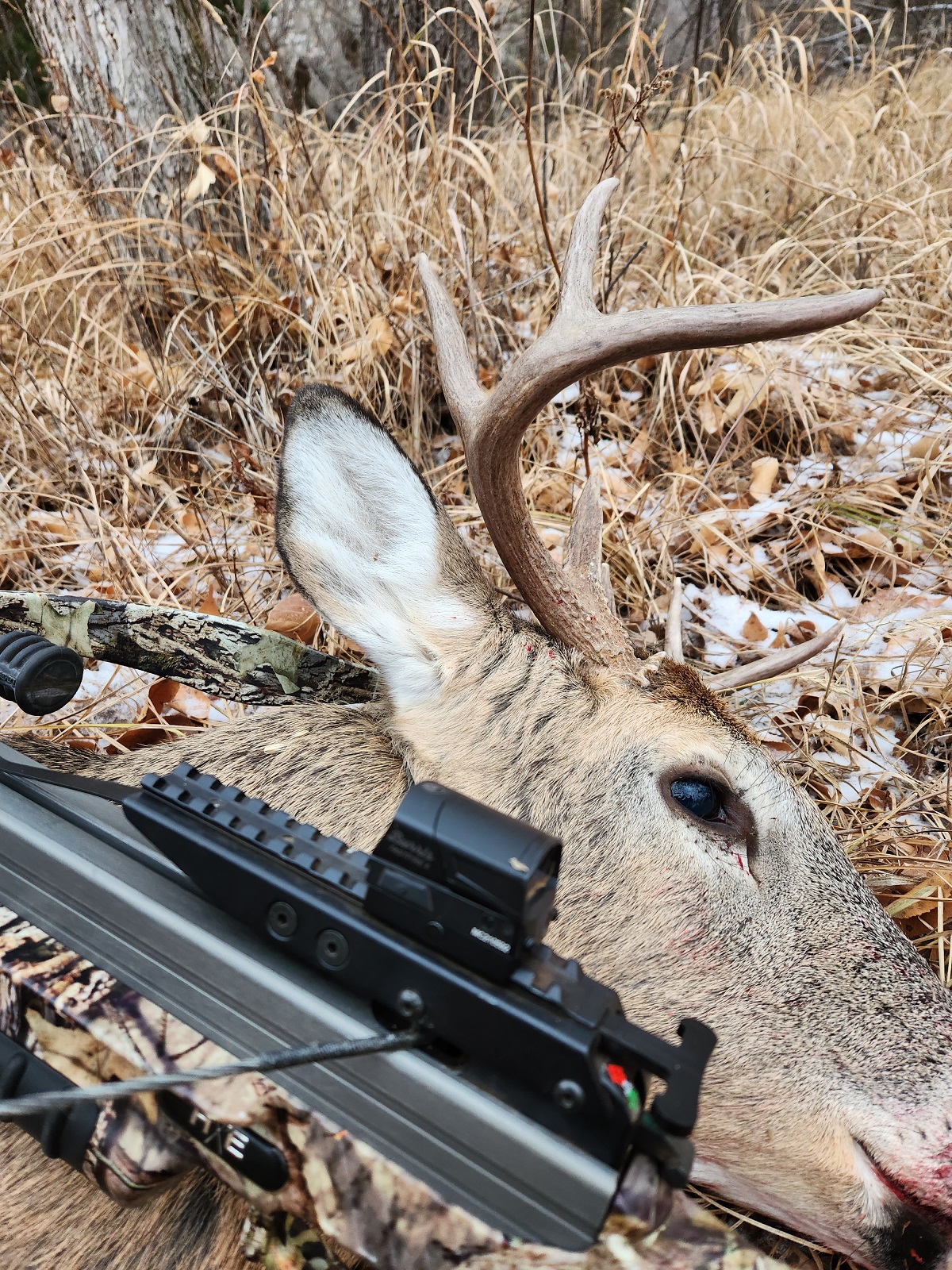 For close to medium-range hunting, a red dot scope can be very effective.  I’ve used this Burris FastFire scope for two seasons and love it.  The advantage is the ability to keep both eyes open and put the red dot sight exactly where you want the arrow to strike.  I shot this buck in the chest as it slightly quartered toward me and downed it in 75 yards.  I took two bucks this fall with this approaching shot and have no question about its lethality, especially from the ground at close range. 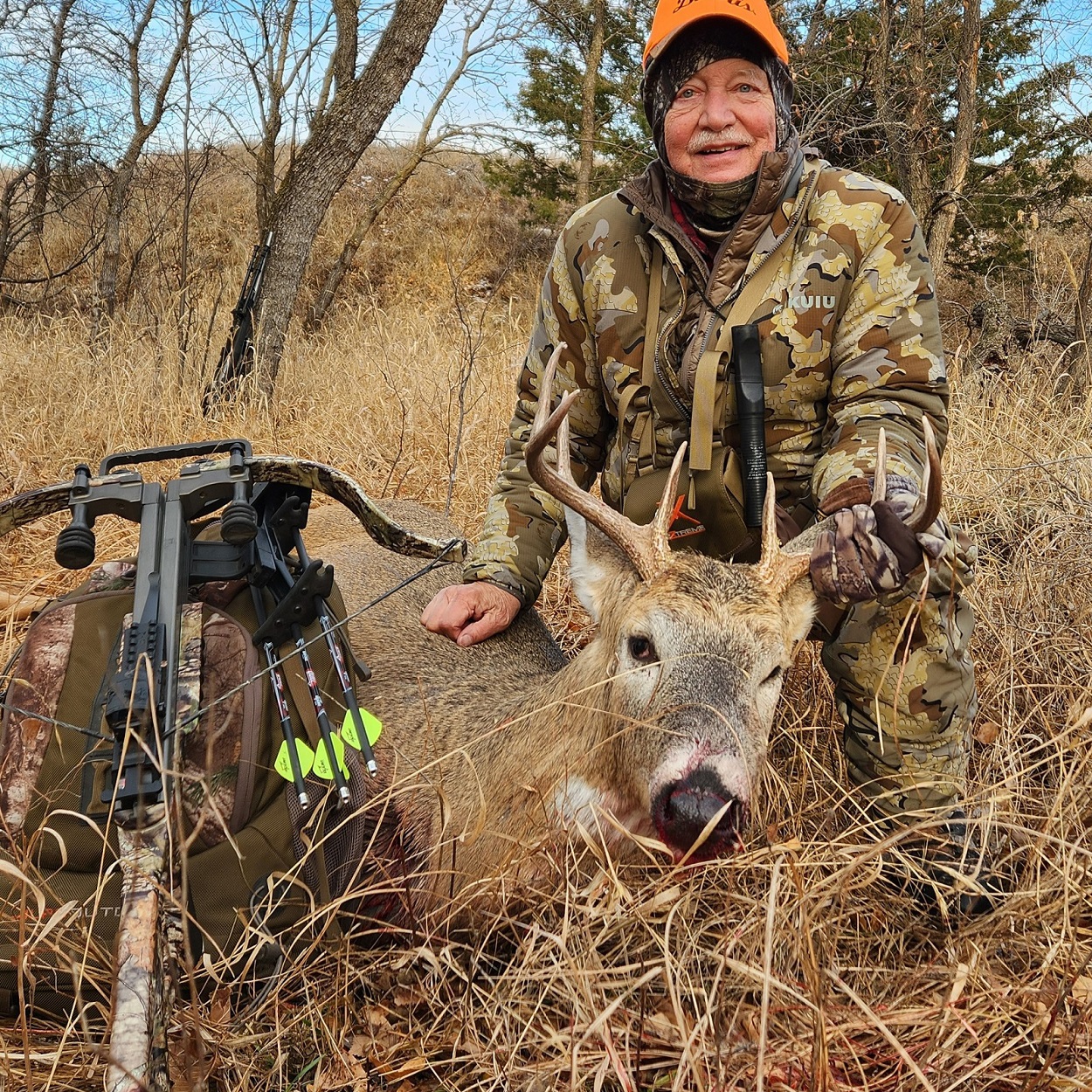 This buck fell to an Excalibur AXE 360 that is plenty fast enough to dispatch a mature whitetail deer.  I used Sevr Robusto two-blade heads that weigh 150-grains with a 2-inch cutting surface.  They fly exactly like target points so that practicing never consumes my hunting heads.    This image was taken where the buck fell. 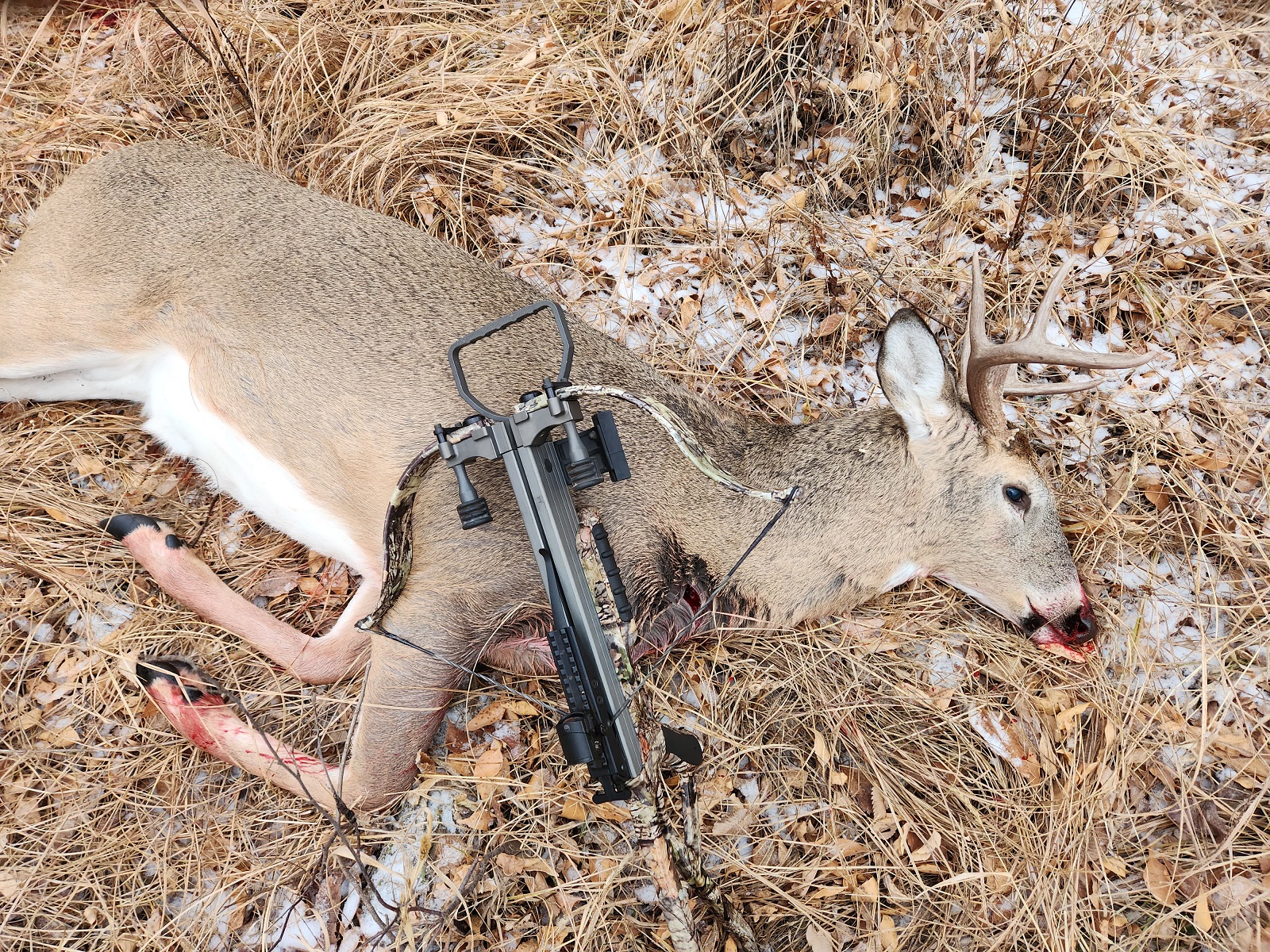 Not much is written about frontal shots of deer because most archers use tree stands and an angle of 45 degrees or more prevents and angling arrow from reaching the vitals.  However, from the ground, a frontal shot has no ribs or shoulder bones to avoid and goes directly into the boiler room.  On the two bucks I shot this fall, I found little blood for the first 10 yards but plenty after that.  Don’t take this shot unless you have practiced it and can visualize the course of the arrow. 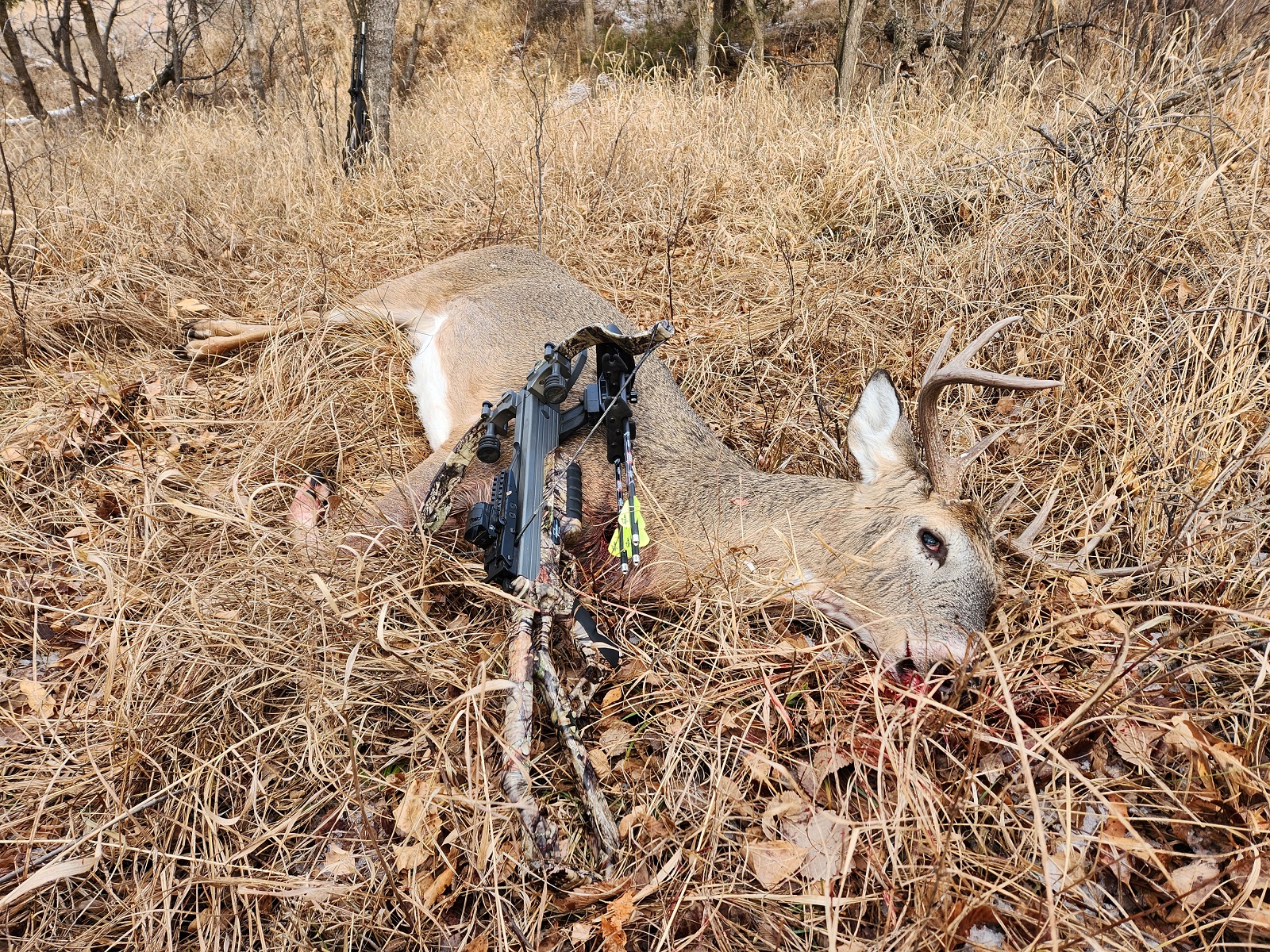 The final advantage of hunting in thick cover is the ability to hear deer approach which allows you to position and aim the bow before you see it.  Notice in this picture how noisy the ground looks.  With a compound or crossbow, sight your bow on an opening and remain still until the deer steps into it.  If you are just sitting against a tree as I do, the deer may stop and look at you, providing the perfect standing shot.  Squeeze or release and your tag is filled.

7 Reasons to Gift a Crossbow for Christmas