What a bowhunt! What an Experience! I love to bowhunt whitetails and this trip was amazing. 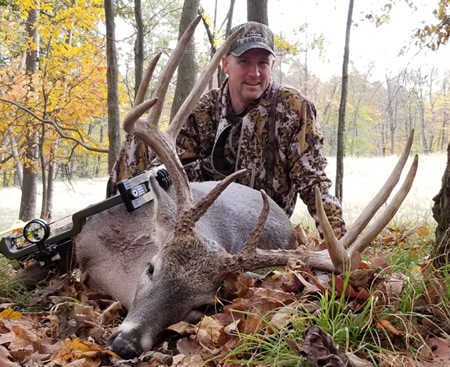 The smell of bacon cooking on the skillet greets my senses this morning as I reflect on time spent with Ron and Karen Douglas the hard working, proud owners, of Xtreme World Class Whitetails located in Millersburg, Ohio. They, along with their talented guide staff, have made a lasting impression on this hunter.

I arrived at Xtreme World Class Whitetails on Thursday evening, November 2nd. Not knowing what to expect I stepped into a world any hunter would love. On entering the lodge, I was greeted by Ron with a strong and friendly handshake. My eyes looked around the room and there were mounts and sheds everywhere.

A great mule deer mount is showcased in the main room. killed by Karen. As I was checking out the surroundings, Karen was working on cleaning up after dinner and asked if I was hungry. I took her up on her offer and sat down to a warm plate of steak, shrimp, cauliflower and other delicious sides. Karen explained that every meal is eaten as a family and everyone sits and eat as one group. 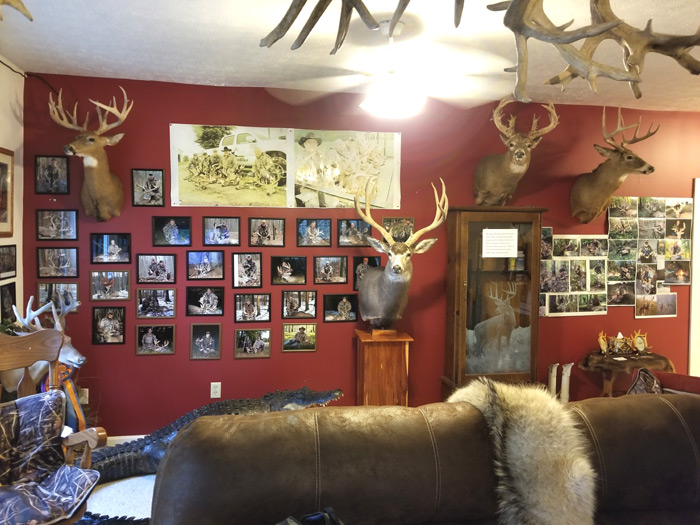 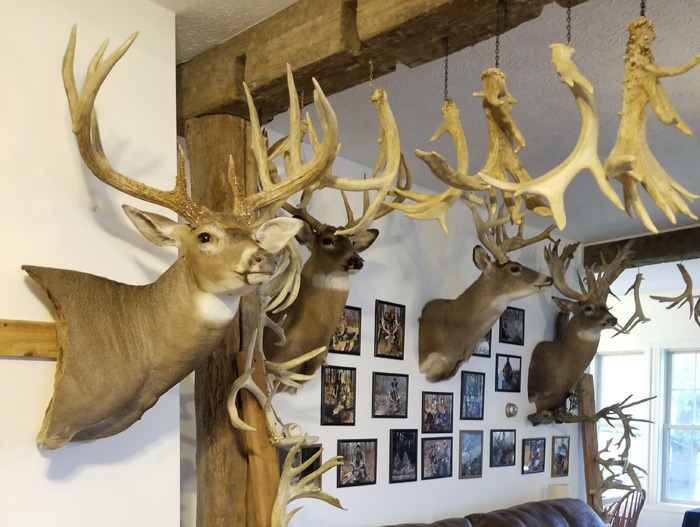 After dinner, Karen took me upstairs to my room, tastefully decorated with great wildlife artwork and all the beds were decked out in camo sheets. They have the capability of sleeping large groups of hunters if you want to bring down a group of your buddies to hunt. There is no stone unturned when it comes to them wanting you to feel at home. I was introduced to another hunter, Jeff, who was also from Pennsylvania. He had hunted that day and told me he was really impressed with the hunting and the guides. I was excited to get out into the stand the next morning so I headed to bed.

Friday morning started with a great breakfast and conversation about the hunt. I rode with Lauren and Lee to where we would set up and hunt for the day. We were tucked in a ground blind/shooting house that was on top of a ridge, overlooking a thick grassy area with lots of trees. There were acorns everywhere. I placed two Buck Cages out in front of me at about 25 yards. The wind was swirling a bit and was to get stronger as the day progressed. I got my rangefinder, nocked a BEA Zombie Slayer on my Athens Revelation 6, and was ready for action.

Does started to come to the flat and feed on the fallen acorns that were scattered all over the forest floor. Soon we could see antlers coming our way. Some smaller bucks we coming to eat on the abundance of acorns and bump some does around. Off in the distance, up the hill, I could see a large buck working a scrape and walking along the ridge.

Light grew brighter and the deer movement intensified. The three of us watched intently as the deer worked in and out around where we were sitting. Bucks were scent checking does and making rubs all around us. Even with the wind swirling all around the deer never stopped or busted us.

The morning hunt ended with news that Jeff Follmer had killed a great buck. After seeing pictures of Jeff’s buck, I realized I had taken video of his buck rubbing a big tree. Ron explained to me that they video all of their hunts and then place them on their Youtube Channel. ( Xtreme World Class Whitetails of Ohio) They also provide each hunter with a copy of the video for their personal memories.

Back at the lodge we all went up to the skinning house to congratulate Jeff and see his trophy. Jeff killed a beautiful buck that would  score in the 170’s and it had some great character. Karen came to the skinning shed and let us know that lunch was ready and we all headed to wash up and eat lunch together.

While we were eating lunch the next group of hunters arrived and we greeted them. Tony, Chip, and Richard came from Virginia to hunt with Ron. For Tony, this was going to be his 5th year hunting him and he had nothing but wonderful things to say about his past trips.

The evening hunt began slow as the wind had picked up and was blowing steady. The deer seemed to be on edge as the wind was switching each time as it blew. Does filtered into the flat vacuuming up acorns and chewing them loud enough that we could hear them. A few small bucks were running some does. We all laughed as they pretended to dog the does like mature bucks do. As the sun set I saw a buck working down the hillside. He was a tall tined 9 point and I wanted that buck to walk within bow range. He stayed toward the top of the ridge and made his way away from us. Light faded to darkness and we left to come back to the lodge.

Dinner was fantastic. It you leave the table hungry, it is your own fault. Pork chops, salad, potatoes, homemade apple pie. Stories of that day’s hunt were told by everyone. Ron had Lauren, one of the guides, start a fire in the fire pit and the rest of the night was spent outside on the cement patio in rocking chairs, around the campfire. The temperature was dropping steadily and the talk was there would be frost in the morning. Sitting around the fire hearing Tony talk about his previous was a blast. I couldn’t wait to get back out there the next morning.

I woke Saturday morning and looked at my phone. Weather channel said, 36 degrees and clear. As I dressed, a little warmer for the day, I could smell eggs and sausage being cooked in the kitchen. I went to the table as Karen called us to breakfast. As we ate, we talked about the morning hunt, the temperature drop and were all hoping the bucks would be on their feet looking for receptive does. I finished breakfast and headed out to the dressing room where my hunting stuff was waiting for me. I dressed in my G-Force Evolved Camo and stepped outside.

A wonderful blast of cold air filled my lungs. In the western sky the full moon was setting and the stars were bright. I hoped the day would be a success. The trip to the stand was short. Ron, Lee and I snuck quietly to the shooting house. Again, I hung my scent filled Buck Cages in front on the stand. The air was cold and the wind was calm. In the blind we sat quietly waiting for the sun to come up.

Ron had Lee turn on one of the heaters that was in the blind. The hiss of the heater was followed by an instant blast of heat that felt great on my chilled hands. The morning was slow with only a few small does and some small bucks but around 9:30 the movement started to pick up. We could see bucks chasing does on the hillside and a 130 inch 8 point making a rub on a large tree about 50 yards away. His scraping antlers drew the attention of some other bucks.

Through binoculars I could see deer running all over the place. Does were on high alert trying to get away from love sick followers. At one point we saw 4 different bucks chasing the same doe. She ran by the blind with her mouth wide open, gasping for air. The 4 bucks followed her down into the ravine.

Then Ron spotted a deer working our way and told me to get ready. I saw a tall tined 9 point buck with a slight limp coming our way.  I waited patently for the buck to present a shot as he slowly worked his way down the hill toward us.  He stopped a few times to pause, look around, and then continued our way.

My heart was beginning to race as the buck closed to 40 yards. He began to angle directly toward us but I was hoping he would come even closer. The buck paused, looked around the woods, licked his nose and put his head down. This gave me an opportunity to turn toward the buck. Then he began to  angle our way again. He closed the distance to 25 yards and stopped. The deer was slightly angled toward us and Ron asked if I could make the shot. I replied, Yes!

I  drew my Athens Rev 6 and found my anchor point. My pin floated on the spot I had picked out, I slowly let my breath out and touched the release. The shot was off, the NuFletch Ignitor nock allowed me to see the BEA Zombie Slayer as it entered the buck. The Grim Reaper Hybrid found its mark and the buck spun on his hind legs and took a few steps and went down. The Hybrid had found his heart and lungs. There was a celebration going on in the blind with all of us. I couldn’t wait to get my things gathered up and go see my buck.

Giving the buck a few minutes to expire we talked about the hunt, shook hands and even had a few high fives. We all left the blind and headed to the downed buck. As I walked up to him he seemed to grow bigger. His G2’s had to be almost 12 inches long. His G3’s were pushing 10 inches as well. His body size was impressive and his neck was swollen. I could smell his musky odor and it was easy to tell he had been rutting pretty hard. I knelt down and touched his soft brown fur. I gave thanks to God for providing this animal as food for my family. 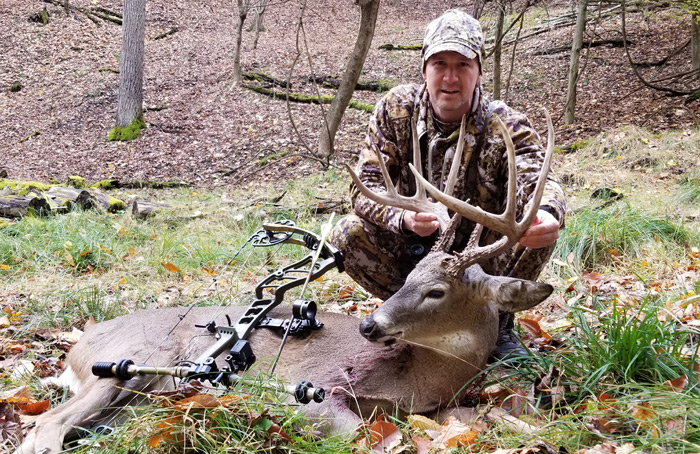 Ron had found the perfect spot for pictures and headed back to get the Polaris. We loaded up the buck and headed out where Ron took several photos and worked diligently to get the best angle to show off the bucks tall rack. Ron takes a great deal of pride in getting the best picture he can. He also gives each hunter an 8×10 photo before they leave camp.

Heading back to the lodge I was on cloud nine. What a hunt! What and Experience! I love to hunt whitetails and this trip was amazing. There was not more that I could ask for from the experience. Back at the lodge I was able to retell my story to the other hunter. Congratulations were given out and pats on the back felt great.

My last evening at the lodge started off with a steak and shrimp dinner. Again, Karen knocked it out of the park with her meals. Ron manned the grill and Karen prepared the rest. Time around the firepit sharing pictures and stories well into the night was a blast. I found it hard to sleep that night as I was still very excited about the whole experience. I finally drifted off to sleep and slept well!

I have to give a huge thank you to Pen and Chris Walizer of Buck Cage who made this trip possible. They have supported me greatly over the past few years. Also, a huge thank you to everyone at Xtreme World Class Whitetails of Ohio. Ron Douglas is the owner and a professional guide who has over 20 years of experience. He is also an official SCI scorer and knows his stuff! If you want the hunt of a lifetime with amazing people, contact Ron or Karen at 330-237-9960. You can also reach them at INFO@XTREME-WCWO.COM and you can follow them on their website: www.xtreme-wcwo.com or on Facebook! Check out their website and sign up for their free hunt giveaway!