Few hunters ever harvest a 160-plus-inch whitetail. Burt Andrew of Buffalo County, Wisconsin, killed two in one season, one of which surpassed 170 inches.

by Robert Hoague
in Bowhunting Articles, Bowhunting Posts, Deer
0 0
A A
5 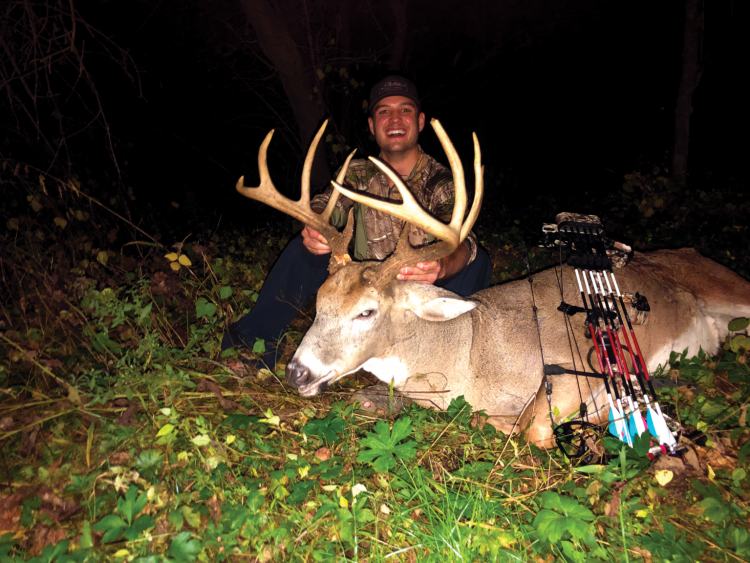 Burt Andrew of Buffalo County, Wisconsin harvested the first 160-plus during archery season. “We believe Slice to be at least 5½ years old with three years of trail camera photos dating back to 2019,” he said. “He was only an 8-point back then, but we were able to identify him year to year due to a large cut in his right ear.”

Despite years of encounters, October 9, 2021, was the day they met for the final time. It was hot, especially for October. The high was in the 70s. But Buffalo County is a magical place. It’s known for big bluffs, long ridgetops, and vast ag fields. The place just seems to defy odds, even when conditions aren’t great.

Andrew knows this, and he set up in a known hotspot about 40 yards into the woods off the edge of a standing corn field. The location is between two ridgetops with a long valley in the middle. It creates a bowl in front of the stand that deer frequently travel through. A thick point that’d been recently logged, which deer commonly bed along, tapered down into the bowl.

It wasn’t long after he settled in before deer began moving. A yearling buck walked down the logging road and exited the timber into the field. Shortly after, a group of does and fawns pushed through, fed on the underbrush, and did the same.

“I was on a freezer-filling mission,” Andrew said. “So, when the first doe presented a shot, I took it. The arrow passed through and stuck in the ground right where she stood.” The shot was a little farther back than he’d like. The doe bolted, ran a few yards, and bedded down. It was looking straight toward him, so he couldn’t get another shot off.

About five minutes later, he heard a twig snap down the hill. A slow turn of his head revealed a buck with a massive rack. It stood broadside only 30 yards away.

“Still holding my bow, and anticipating a follow-up shot on the doe 15 yards from me, I turned and drew my bow,” Andrew said. “He was sticking his neck out sniffing my first arrow I shot the doe with. He was staring straight at the bright blue Lumenok.”

The buck started to get nervous, so Andrew aimed and released the arrow. It struck the vitals, and the deer ran full speed ahead.

“I reached for another arrow, knocked it, and pulled back,” he said. “He was running full speed past me at about 15 yards when I was fully drawn. Being an active bowfisherman, I took a follow-up shot without looking through my sight picture. Like bowfishing shots I’ve taken hundreds of times, my (arrow) flew at the buck and hit him 6 inches in front of my first shot. The buck continued to run away before piling up in sight, not 40 yards away.” Immediately after the buck fell, he nocked another arrow and shot the doe a second time, which got up from all the commotion.

Incredibly, this was the second year in a row that Andrew shot his biggest buck to date with a bow. Even more, he was able to hit both bucks with a second follow-up shot at full speed. It’s a great example for always bringing enough arrows to the deer woods. You never know when you will need them.

“I returned to the shack to tell my hunting crew that I had shot two does,” Andrew continued. “We followed the blood trail to the second ‘doe,’ and it had a massive set of antlers attached.” Andrew, his father, brothers, cousins, and family friends were present for the recovery. They were all smiles when they spotted the 165-2/8-inch whitetail.

Nearly a month and a half later, Andrew was back in the Buffalo County deer woods. Rather than toting his bow, this time, he had his Savage Axis II 6.5 Creedmoor in hand. Just as with the buck he called Slice, he was destined to cross paths with another target buck. This deer was nicknamed “Boss” — a 5½-year-old buck they had three years of history with.

“We first took note of this deer in 2019 when he showed up on our trail cams with a nice frame that came very high off his head,” Andrew said. “I knew based off his small body that this deer had the potential to blow up. During a deer drive in 2019, my brother pushed this deer to me and being able to recognize him, I elected to pass. My brother, the driver, also passed him at the same time.”

On Sunday, November 21, 2021, the day brought stiff 15- to 20-mph winds and 35-degree temps. It was quite brisk in the fall timber. Andrew was sitting on a ridgetop that’s about 100 yards wide and 300 yards long. A steep drop-off stretched out in front of and behind him.

The goal was a successful deer drive. And that’s what he got. His brother started the push, and it wasn’t long before Boss squirted out of the timber and entered the open. He started running down the length of the ridge. A hundred yards or so into the trot, Boss turned and angled toward Andrew’s location, who was tracking him the entire time. Eventually, the buck slowed to a walk, and he took the 60-yard shot. The buck dashed over the hill and out of sight. 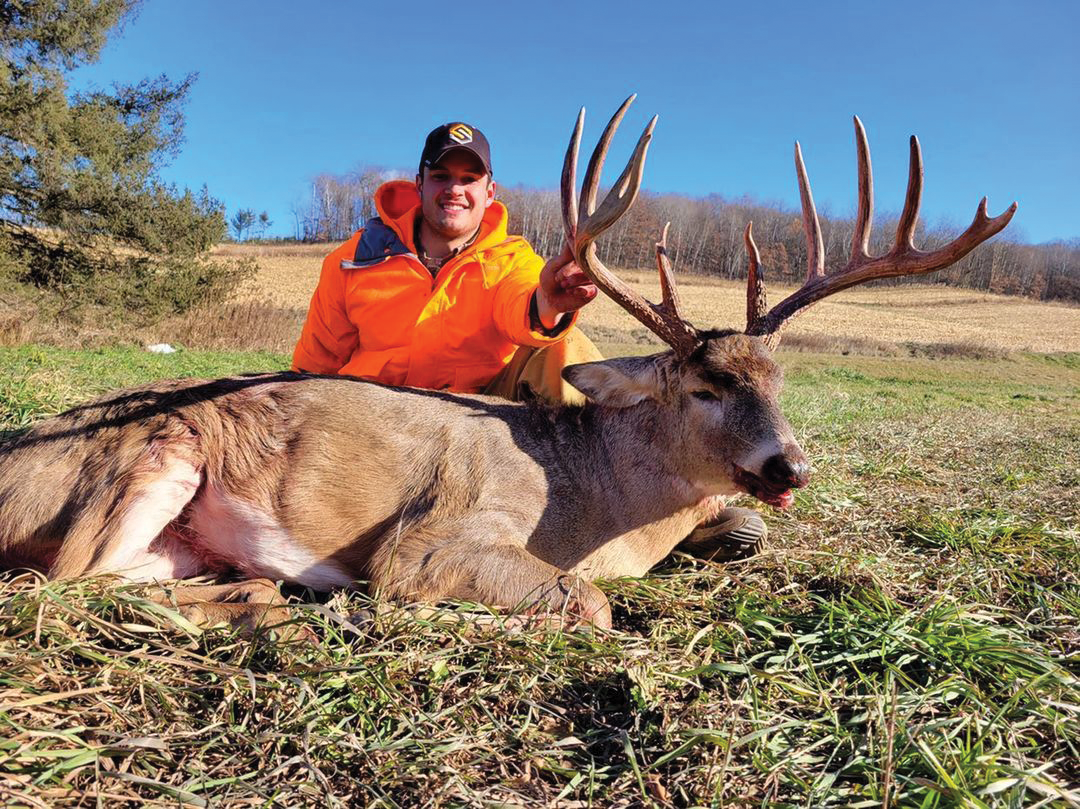 Unsure if the shot was true, they walked over and looked for blood. “I prayed my shot was true and confirmed this when the driver found blood right where I had shot him,” Andrew said. “We followed a heavy blood trail about 40 yards down the hill to where he piled up. Adrenaline was pumping so much so that I did not see his rack at first. He had expired right next to a downed log and his antlers were so high off the ground I thought they were part of the log.”

He truly couldn’t believe his eyes when he reached down and hoisted the 170-1/8-inch rack. It was even more surreal that he’d harvested his two best bucks ever in the same season, especially after tagging two whitetails in the 150s the year before. Topping that feat with 165- and 170-inch bucks was a true blessing.

“I was in complete shock,” Andrew said. “My oldest brother was so pumped when we brought the deer back to camp. He ran out celebrating.

“This deer means so much to me and our hunting group,” Andrew concluded. “It is the largest deer we have harvested off our property. It is a testament to land maintenance, as we have really tried to grow our deer over the last five years. Running 20-plus cameras and keeping tabs on the deer that frequent our farm has been a highlight for me. It has paid off in a big way.”

How To Find Late Season Bucks